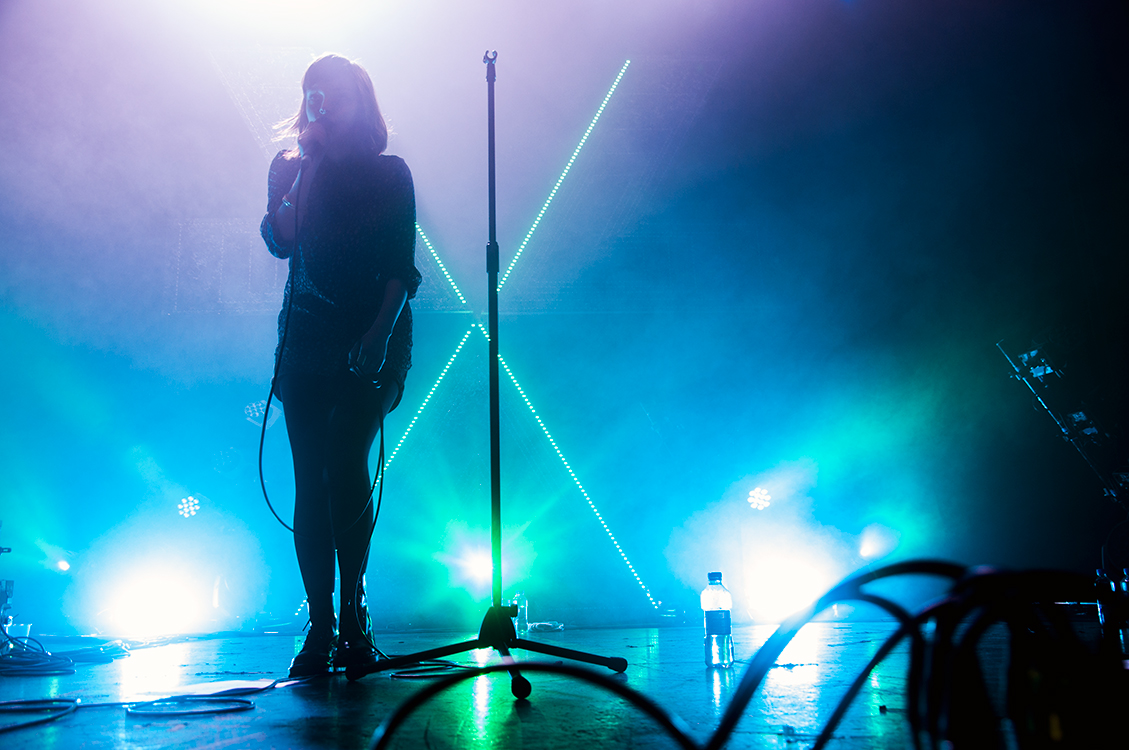 It was quite a fantastic year for Scottish trio CHVRCHES in 2013. With their debut album The Bones of What You Believe breaking the Top 10 UK Albums; plus hugely successful singles in the form of ‘The Mother We Share’ and ‘Gun’, the indie/dance group finally brought the album to the sold out Institute venue in Birmingham.

Opening for the group was Soak;  a small, 17 year old girl from Derry who has been breakthrough in Ireland. The first act to sign a deal with Chvrches new record label, the singer walked onto the stage and instantly silenced the Institute venue. Whilst quiet, her delicate, incredible vocal resonated around the venue. Her single ‘BLUD’ stood out from the half-hour slot which was simple yet impressive. It was a brave choice for a support; as the music is worlds away from the upbeat dance of Chvrches, however the solo-artist wowed the crowd and with already support slots with likes of Snow Patrol under her belt and playing numerous summer festivals, 2014 could be an interesting year for Soak.

Whilst Soak certainly attracted new fans; it was Chvrches that everyone was here to see.With a set fully compiled with tracks from last years successful The Bones of What You Believe, female singer Lauren Mayberry kicked off the set with ‘We Sink’. The track set a high tempo for the evening, as the crowd bounced to the FIFA14 featuring song. With electronics the driving factor of Chvrches music, plus stunning live vocals, the performance was very crisp and flawless. However, Lauren is known for being quite a static front-woman. This seemed to hamper the crowd slightly who were more transfixed by the vocals rather than dancing along. The point was proven as keyboardist Martin Doherty took over vocal duties on ‘Under the Tide’ which saw the crowd engage more in the live performance of the song.

The bands single ‘Gun’ saw the first really dance of the evening as the track was sung back loudly by the Birmingham crowd. Other highlights included ‘Recover’ and the band biggest hit to date and set closer ‘The Mother We Share’. The two song encore saw the band play the final two tracks from their debut album; firstly ‘You Caught the Light’s hazy electro introduction reverberated throughout the packed room, before ‘By the Throat’ closed the evening.

Chvrches live performance is flawless. With huge dance along songs and a set list which mixes the singles with excellent album tracks the Scottish band are an excellent live band musically. It’s clear this band will once again be another stand out act on the summer festival bills – which is set to include a sub-headline slot on the NME/Radio 1 Stage of Reading and Leeds Festival. That will be worth catching.