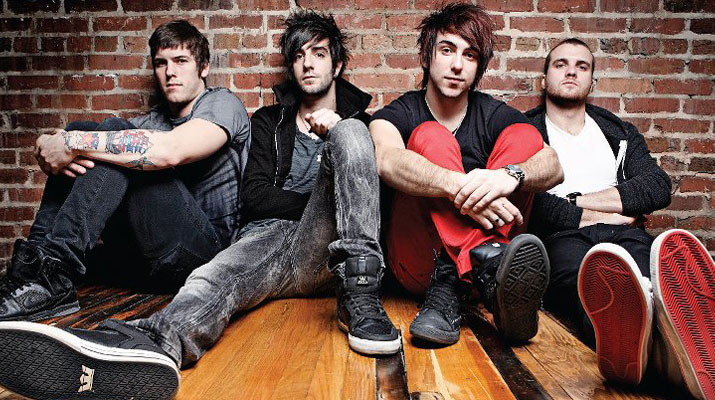 It may be a cool spring evening in mid-March, but you’d be forgiven for forgetting as you step into the sweltering, sub-tropical climate of the 02 Academy Birmingham this evening. Packed to capacity, the entire room is a heaving mass of bodies crammed expectantly in front of the main stage. On what will be All Time Low’s ninth ever Birmingham show, it’s incredible to see the rabid enthusiasm they inspire in the 3000-strong crowd waiting expectantly for their arrival. Now onto their fifth studio album, Don’t Panic, the Baltimore four-piece have come a long way from their first, considerably smaller UK shows, and judging by the average age of gig-goers tonight, they’ve ushered in a new generation of fans in the process.

Before they take to the stage, however, it’s Australia’s TONIGHT ALIVE who launch into a high-energy, attitude-filled opening set. The Sydney five-piece’s edgier pop-rock sound is seemingly music to the ears of tonight’s crowd, who greet every song and every word with the kind of passionate screams usually reserved for the headliner. Fan favourites like ‘Breaking and Entering’ and ‘The Ocean’ have them singing every word, much to the delight of lead singer Jenna McDougall. With this being their first tour in over a year, you might expect them to be a little rusty, but they take command of the room with such boundless enthusiasm that, even had they not performed as well as they did, it wouldn’t have mattered. New track ‘The Edge’ (given only its second ever live airing tonight) goes down a storm, and as closer ‘Lonely Girl’ kicks off, the place really gets going. Middle fingers raised aloft, McDougall basks in the song’s final, rousing moments as the crowd eagerly punch the air. It’s a brilliant performance, and the best possible lead-in to ALL TIME LOW’s own high-octane set.

The high-pitched screams that fill the room as the lights go down are deafening. As the curtain falls and the band are revealed, they only get louder. Launching straight into ‘Do You Want Me Dead?’, All Time Low have the whole crowd singing and jumping along. ‘So Long, Soldier’ and ‘The Irony of Choking on a Lifesaver’ keep the momentum going, and it’s only after ‘For Baltimore’ that they stop for a breather. “This might be the hottest show in the world. For realsies” Alex Gaskarth states, only half-joking. With hundreds of people still eagerly crushing forward, he has to ask everyone to take a step back, just to help those who are already passing out in the first few rows. It’s the first of many instances where the band make it clear just how strong a relationship they have with their fans, and it’s refreshing to see.

Picking up their instruments once more, the band return to their roots with ‘Six Feet Under the Stars’ and ‘Vegas’, a song which Gaskarth claims is often requested, but rarely performed. Regardless, their execution is (once again) spot on, and the crowd are loving it. Then again, not a song goes by that isn’t accompanied by the sound of 3000 voices singing in unison, or a cheer so enthusiastic you’d be forgiven for thinking it was being co-ordinated by a North Korean dictator, and not spontaneously inspired by four boys from the East Coast.

Following on from a brief acoustic interlude (including old favourite ‘Remembering Sunday’, and the more recent ‘Therapy’),  the room is filled with the clash of swords and steel, as Russell Crowe’s famous words ring out; “Are you not entertained?” There’s no doubt about that, as for the second part of the set the favourites come thick and fast – ‘Damned If I Do Ya (Damned If I Don’t)’, ‘Backseat Serenade’ and ‘Oh Calamity’, as well as their brilliantly executed rendition of ‘Time Bomb’ (for which five lucky audience members are pulled up onto the stage to join in, and do so with surprising conviction).

Immediately as they depart the stage, the chorus screaming for their return begins, and of course they do. Throwing themselves straight back in with ‘The Reckless and the Brave’, it’s then onto ‘Love Like War’, where the band are joined by Tonight Alive’s Jenna McDougall, who delivers Vic Fuentes’ part to perfection.

Closing on So Wrong It’s Right classic ‘Dear Maria, Count Me In’, the band revel in the ecstasy they’ve whipped up around them. It’s rare to witness a crowd so full of adoration for a band and their music that even the back rows and the balconies are pogoing along with every single song, their arms raised up so often and so enthusiastically that the sea of horns, fists and thumbs up mean the stage is almost completely obscured from the back of the room.

While they’ve lost some of the youthful spontaneity that made them feel like the natural successors to Blink 182’s pop-punk crown, All Time Low have replaced it with an accomplished, dazzling and wound-to-perfection set, whose track roster is so strong it almost feels like a greatest hits collection. There’s no doubt that everyone here tonight got their money’s worth, and judging by the euphoric look on the faces of the sweaty masses emerging onto the Bristol Road tonight, you probably couldn’t put a price on it anyway.