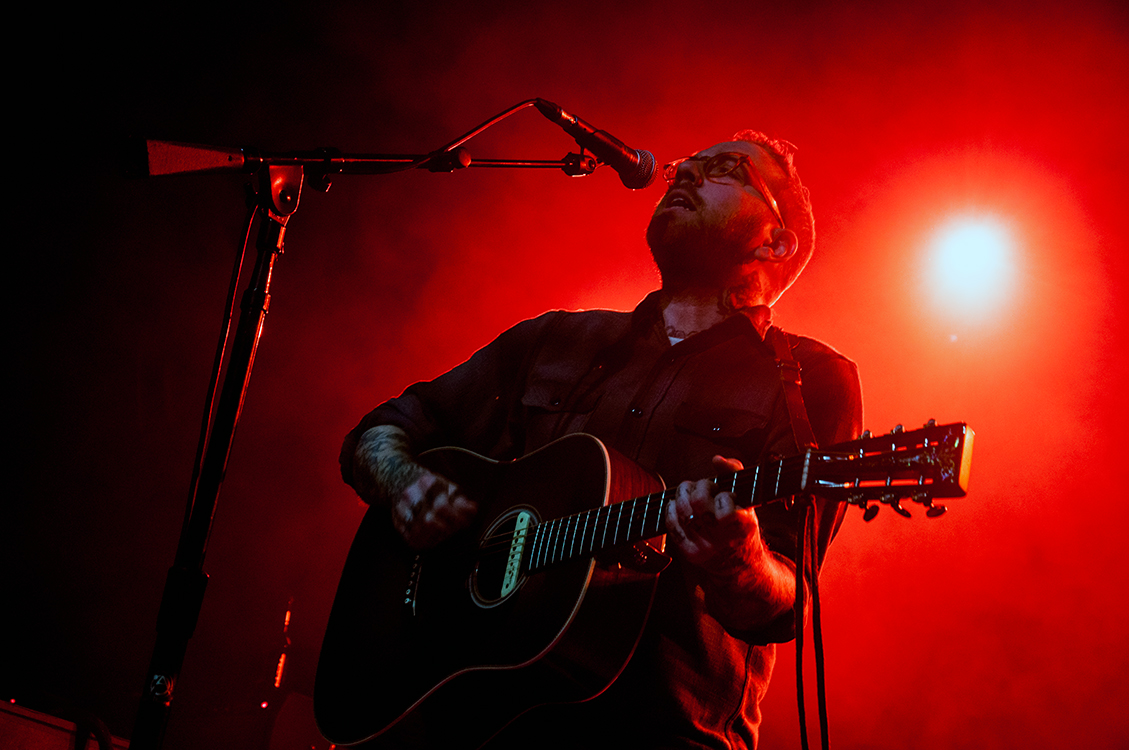 CITY AND COLOUR aka, former Alexisonfire front man Dallas Green last night arrived to a sold-out Birmingham O2 Academy to sing tales of heartbreak, love and loss to an adoring crowd. Having last played in Birmingham supporting Biffy Clyro at the LG Arena, City and Colour’s own headline tour seemed long overdue; and for this show, from the moment he arrived on stage, he had the audience’s attention and never let it go.

The crowd were warmed up by the delicious sounds of Hannah Georgas. Her set was very moody but seemed to entrap the crowd in her performance, it made the 10 song set seem to fly by. Highlights included ‘Enemies’, ‘Lovers Breakdown’ and ‘Thick Skin’.

For the main attraction, Dallas seemed to be in a shy and retired mood in his interaction with the crowd; yet his delivery and performance was faultless. This really shone through mid-set when the touring-band retreated to the side of the stage and left the singer alone with just his acoustic guitar as accompaniment. ‘Like Knives‘ was treated like an old friend and was the first example of how powerful City and Colour’s voice can actually be. Before performing ‘Body in A Box’, he addressed the crowd, asked for everyone to “join together for just a moment without the need for a camera or a phone”, before joking “you may have a new filter to try, but come on, just for a moment let’s enjoy this together”. This was met with a huge cheer by the majority, but a few people towards the back failed to get the memo. Following the track was a perfect rendition of ‘Comin’ Home’ from the Sometimes album.

The band returned to the stage, sounding even louder than before they left; more bluesy and absolutely on fire. Having the likes of Jack Lawrence (The Raconteurs, Dead Weather) on bass, Dante Schwebel (Hacienda, Dan Auerbach) on guitar, Doug MacGregor (Constantines) on drums and Matt Kelly on pedal steel guitar and keyboard seemed to encourage City and Colour to fire off each other.

Recent single ‘Thirst’ sounded incredible, especially by effortlessly managing to segue it into ‘Fragile Bird‘ without a hint of change. Other highlights were a stunning ‘Little Hell’, ‘The Lonely Life’, ‘Sorrowing Man’ and a lively version of current single ‘Harder Than Stone’.

The encore kicked off delicately with Dallas and his acoustic again performing the first half of ‘The Girl‘ alone before the band arrived back on stage to kick off the last half of the track. The final two songs, both from the latest album, managed to completely overwhelm the crowd. Effortlessly, loud and vibrant; the performance of ‘Two Coins‘ was sublime, however finishing on ‘Death’s Song‘ really was the ‘icing on the cake’. The crowd interaction singing along to the “woah” refrain was a sight to behold and as the house lights went up, looking at the dedication and participation of the fan base said enough. A perfect end to a virtually perfect performance.

City and Colour may not be #1 in the charts, but the semi-underground attraction surrounding him is phenomenal. It would be fantastic if he returns to these shores for summer festivals; not only for the sake of being able to see them again, but so that many more people can welcome his music into their lives by seeing his live performance.