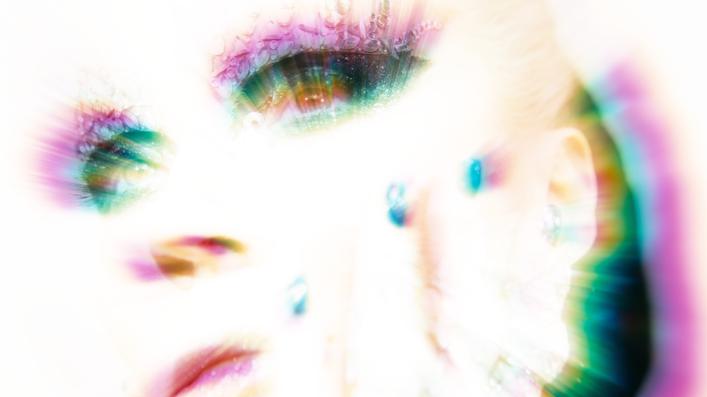 Daphne & The Golden Chord – the new project from Daphne Guinness – will release their new album, the Tony Visconti-produced ‘It’s A Riot’, on March 30 2018 via Agent Anonyme/Absolute. The news arrives alongside the first single to emerge from the album, ‘Remember To Breathe’, which is accompanied by a video shot by photographers/film makers The Fashtons (Aluna George, Maya Jane Coles, Django Django) – watch here.

The collaborative effort to create the video for ‘Remember To Breathe’ reflects Guinness’s shift to the ‘Daphne & The Golden Chord’ alias, having released her acclaimed 2016 debut album under her own name. The kaleidoscopic visuals also feature Visconti himself, who brings the video to a surreal close in a sequence which captures him performing Tai Chi inside Daphne’s head. Speaking about the track – which bolts Visconti’s trademark strings to rumbles of timpani and an unmistakably glam stomp – Daphne says; [quote style=’1′ cite=”]”This song and video represent my spontaneous celebration of the joy of life. I have collaborated on this with people who feel the same, who ’Get it’.” The Fashtons’ Fiona Garden says of the video; “We aimed to visually capture the joy and buoyancy of the song, and Daphne’s vibrant energy. In keeping with the analogue approach to recording, we incorporated tactile effects- the glitter hands, the exploding glitter cannons – we will be hoovering up glitter in our studio for years to come!”[/quote]

‘It’s A Riot’ finds Guinness continuing the partnership she established with Bowie’s right hand man when Visconti came onboard to produce her well-received 2016 debut, ‘Optimist In Black’, itself informed in part by the loss of her two close friends Alexander McQueen & Isabella Blow to suicide. Daphne & Visconti made the album at New York’s Avatar Studios, where recording took a deeply surreal turn when David Bowie appeared at the studio. His approval of the snippets he heard further mesmerised Daphne. Says of Visconti of his partnership with Daphne; “I took an instant liking to her – she played a demo of her track ‘Evening In Space’ and that blew my mind. Based on that one song I wanted to work with her.”

Prior to the release of ‘Optimist In Black’, Guinness was familiar to many from various creative collaborations and her close friendships with both McQueen and Blow, alongside well-respected ventures in film, co-producing the Oscar-nominated Cashback, alongside a role in ‘The Murder of Jean Seberg’. For those wondering what Guinness’ reason for making records is, a better question might be why she waited so long. Having trained as a classical singer & later offered a place at the Guildhall School, a young Daphne always looked set to pursue a career in music, before life had other plans. And whilst the breezy insouciance of ‘It’s A Riot’ finds Daphne some distance from the strictures of her traditional training, for the former Bowie & Bolan-obsessed teenager, she’s now found her true métier.