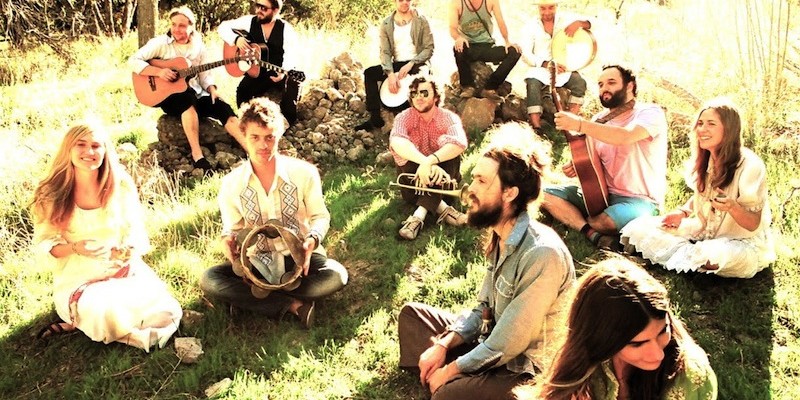 EDWARD SHARPE AND THE MAGNETIC ZEROS are indisputably one of the best live acts around. Anyone fortunate enough to have seen them perform will probably tell you so, at least. Formed from a revolving line-up of twelve musicians working out of Los Angeles California, they not only boast one of the most creative and talented ensembles in modern music, but even a Golden Globe winner in the form of singer Alexander Ebert, whose recent soundtrack for All is Lost won the coveted accolade at this year’s ceremony.

Glitz and glamour are the last thing on the audience’s mind as the band nonchalantly take to the stage at London’s Brixton Academy tonight, however. There’s no entrance music, no fanfare, and no sense of artificial drama as they wander out and pick up their respective instruments. As Ebert makes his way to the edge of the pit, the frenzy that has greeted their low-key entrance seems to reach fever pitch, before he hushes them with a gesture and says, “So what do you guys want to hear first?” As an excited fan on the front row shouts out ‘Better Days’, Ebert debates whether or not they should do the ‘country version’ of the song, and settling on a definite ‘yes’, they’re off.

What follows is an astonishing two-hour long performance whose set-list is almost entirely dictated by members of the audience. All the old standards are in there, including their euphoric, soaring second number ’40 Day Dream’, the spine-tingling ‘Man on Fire’, and ‘Jangling’, whose chorus has the sold-out crowd singing along at the top of their lungs. Unusual requests are greeted with surprise by the surprisingly neat-looking Ebert (who has clearly made something of an effort, even if he does look somewhat like an Amish man missing his hat), but nonetheless the band gamely play along. ‘Black Water’, for instance, makes it onto the ever-growing list, as does ‘Let’s Get High’, a song he was initially reluctant to play, but which they nonetheless come back to towards the end of the set. Ebert, by his own admission, isn’t even too sure of the lyrics any more, but female lead Jade Castrinos gamely feeds him lines from her perch near the drum kits.

The chemistry between these two provides many of the band’s songs with their infectious sense of optimism. Their whirling performance of ‘That’s What’s Up’ feels more akin to musical theatre than a grungy concert in South London, such is the head-over-heels narrative of the performance they give. But they aren’t the only singers in the band. Christopher ‘Crash’ Richard, an ensemble member of Edward Sharpe and one-time member of the LA-based The Deadly Syndrome, takes centre-stage to perform a stunning, Prince-esque falsetto on ‘Motion Animal’ so perfectly you’d be forgiven for thinking the man himself had accidentally wandered out of whichever living room he was performing in, and ended up south of the river.

There are some songs, however, which really bring home just how phenomenal a live band Edward Sharpe really are. Their dazzling rendition of ‘Ain’t Got No… I Got Life’ (a.k.a. ‘that song off the Müller advert’) by the legendary Nina Simone is an unexpected pleasure, as is ‘Up From Below’, which the band hold back until their second-last song, despite the begging screams of the crowd whenever another request is in order.

It’s closer ‘Home’, the song for which they are perhaps most famous, that cements this gig as a truly breath-taking experience. Seeing them at the Gentlemen of the Road tour last year was special, but to witness the power they have over thousands of utterly devoted fans crammed into the Brixton Academy tonight is spectacular. It may seem trite to say so, but as Ebert and Castrinos sing “Home is whenever I’m with you”, you can sense it’s a sentiment undoubtedly echoed by every single one of their fans this evening.