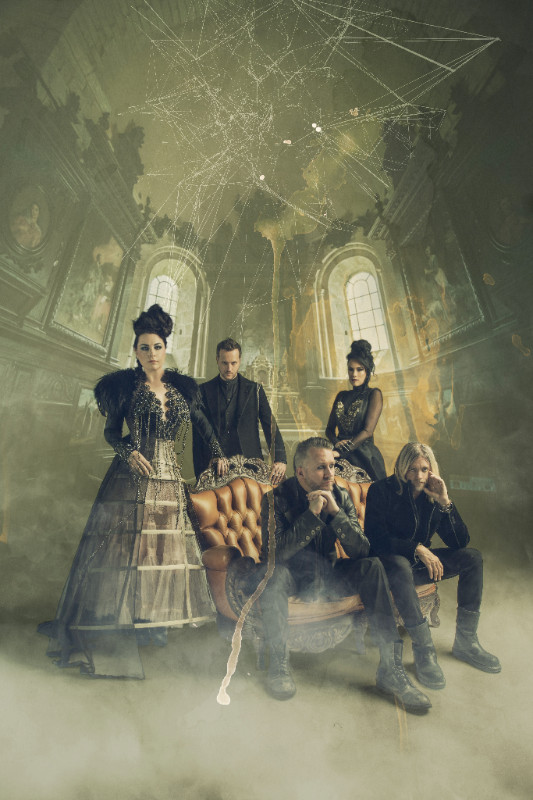 Evanescence are returning with ‘Synthesis’, their fourth and most ambitious album to date, set for a November 10th release. The album features a reworking of some of Evanescence’s best-loved songs recorded with a full orchestra and electronica combined with the band and Amy Lee’s virtuoso piano and voice.

Evanescence composed of; lead singer-songwriter and pianist Amy Lee, bassist Tim McCord, drummer Will Hunt, lead guitarist/backing vocalist Troy McLawhorn and guitarist Jen Majura worked with producers Will Hunt and orchestra arranger and composer David Campbell on ‘Synthesis’ which will also feature two new Evanescence songs, the first of which, entitled ‘Imperfection’ will be released today. The album includes guest performance by famed violinist Lindsey Stirling on ‘Hi-Lo’ the other new song on the album.

Amy Lee describes the meaning behind ‘Imperfection’: [quote style=’1′ cite=”]“For me, this is the most important song on the album. I struggled with the lyrics for a long time because there was a lifetime of work to live up to and I wasn’t sure what to say or how to be good enough. When it finally started pouring out of me, it was undeniable. I had no choice. It’s for all the people we’ve lost, all the people who we could lose, to suicide and depression. I’m singing from the perspective of the person left behind, the person in the waiting room. It’s a plea to fight for your life, to stay. Don’t give into the fear- I have to tell myself that every day. Nobody is perfect. We are all imperfect, and it’s precisely those imperfections that make us who we are, and we have to embrace them because there’s so much beauty in those differences. Life is worth fighting for. You are worth fighting for.”[/quote]

Amy continues: [quote style=’1′ cite=”]“This album is a total passion project for me. There are so many layers in our music, underneath the huge drums and guitars. I’ve always wanted to shine a light on some of the gorgeous David Campbell arrangements and programming elements in our songs, and that idea snowballed into completely re-doing them with full orchestra, not just strings, elaborate programming and experimentation. This will be our first time touring with orchestra and I’m so excited to perform this way-really focus on the vocals, and the emotion and the story we’ve built over the years. I’m also really excited about the new material on the album. Besides the two new songs, there are some really beautiful instrumental in-between moments. The whole thing flows like a big, dynamic soundtrack.”[/quote]

Both Standard CD & Digital versions of the album are available now for pre-order, as well as a Deluxe version which include the CD plus a DVD featuring a documentary on making the album as well as instrumental and 5.1 surround mixes of the songs.

In what promises to be the biggest year for Evanescence yet, the group also confirmed that their ‘Synthesis Live’ tour will continue in UK & Europe, starting with two nights at the Royal Festival Hall in March 2018. The band will be bringing a live orchestra and electronic programming out on the road with them, which will truly deliver a transcendent experience.

‘Synthesis Live’ fan and VIP pre-sales are on-sale beginning September 20th with general on-sale—beginning September 22nd. Fans who preorder the new album by September 19th here will receive access to the tour pre-sale, ensuring the best seats in the house. They will also receive songs from the album prior to release date, beginning immediately with the stunning new reworking of the band’s biggest hit, ‘Bring Me To Life’ and new single ‘Imperfection’.

A variety of VIP ticket packages are available to ensure fans obtain the best seats in the house. Other VIP benefits include the opportunity to meet and enjoy a champagne toast with the band, attend their sound check, and receive exclusive merchandise items. For full tour details go to: www.evanescence.com.