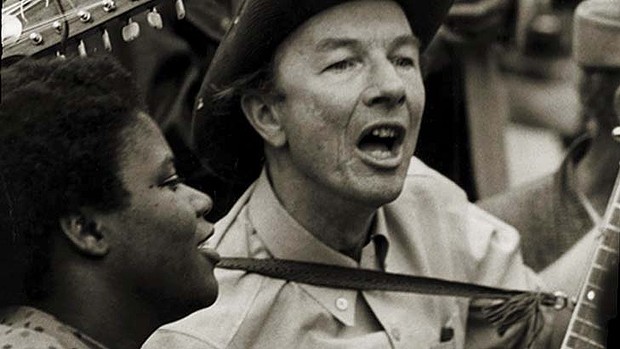 Folk legend PETE SEEGER has died at the age of 94. Lauded by many as being responsible for the massive folk revival of the 1940s, he passed away in Manhattan on January 27th. His death was confirmed by his Grandson Kitama Cahill Jackson.

Born in New York in 1919, his enduring career took him from singing at labor rallies and folk festivals, to Barrack Obama’s inauguration. In 1949, accompanied by Ronnie Gilbert & Fred Hellerman,  he founded the band, The Weavers. For the following few years they were national music stars, with hits including ‘’Kisses Sweeter Than Wine’’ and ‘’So long (It’s been Good to Know Yuh)’’, and selling an estimated four million albums. During the 1960s he mentored some of the most famous acts of the time, including a certain Bob Dylan.

In a career full of activism, he took much of the inspiration for his songs from historic issues such as the Spanish Civil War, the Vietnam conflict and environmental issues which were affecting the US at the time. Despite recording more than one hundred albums, Seeger was said to mistrust commercialism and was uncomfortable with the idea of stardom.

In 1996, he was inducted into the Rock and Roll Hall of Fame as an early influence, the following year his album ‘’Pete’’ went on to win the award for best traditional folk album. He continued performing well in to the 21st Century, including a 90th birthday sell-out concert in Madison Square Garden.

He is survived by son Daniel, and daughters Mika & Tinya.