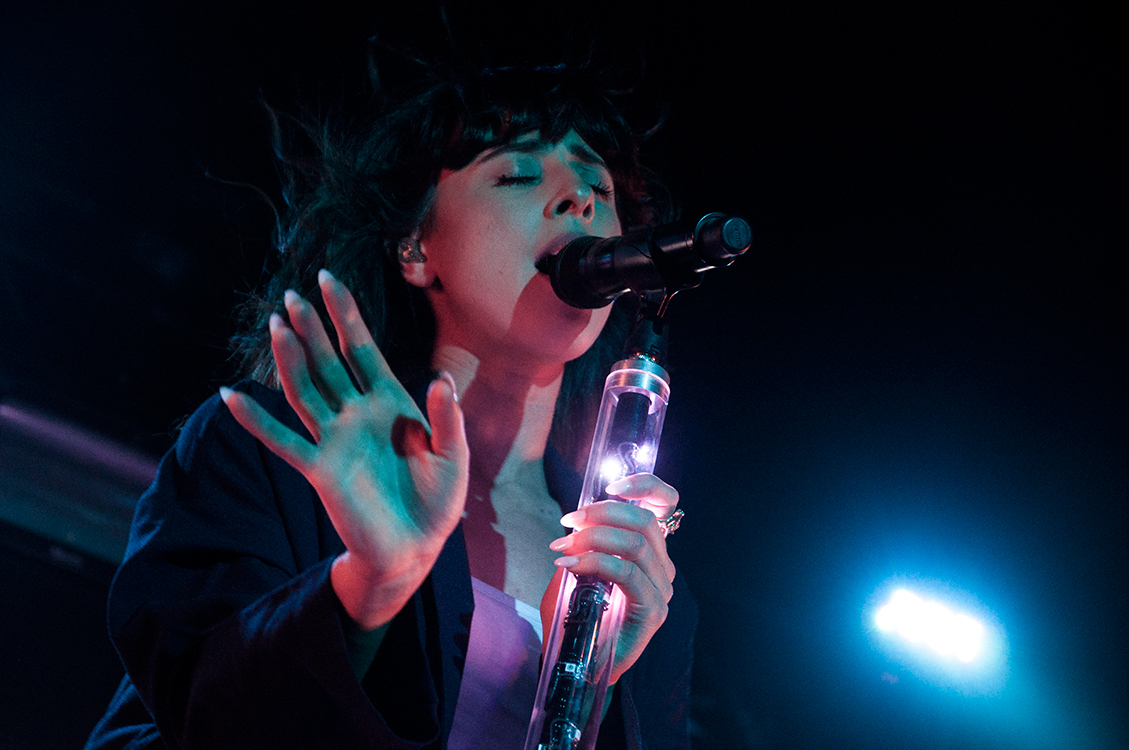 Having being forced to postpone the original date back in February due to illness, tonight’s gig by new talent Foxes was very much anticipated. The intimate venue of the Library at The Institute in Birmingham was certainly rather full not long after doors had opened as the eager young crowd awaited the arrival of Louisa Rose Allen aka Foxes.

The crowd are warmed up by the Scottish 3-piece Prides. Their mix of indie-disco beats reminded the audience of a healthy mix of Chvrches and The 1975. Single ‘Messiah’ closed their seemingly short set. Their cheeky banter seemed to go well with the audience and they exuded confidence throughout their set. Definitely a name to keep an eye out for in the future if you like a bit of indie-disco.

Running a few minutes later than initially planned, the lights fade out, a rush of screams run through the crowd and Foxes’ band walk out on stage. Followed momentarily by the singer herself, dressed in a tight white top, a denim skirt and a long flowing black coat. She looks nothing short of cool.

Kicking off with ‘Talking To Ghosts’ she stands rigid against the mic and slowly relaxes into sensual arm movements. Her eyes closed as the lyrics escapes her lips, it’s easy to see she’s losing herself to the music. After ‘White Coats’ we get a joyous “Hello Birmingham!” to which the crowd responds with cheers… this is rewarded with a huge grin as ‘Night Owls Early Birds’ launches. By now the mic stand is pushed to one side and Foxes begins prowling the stage looking ever the popstar she is fast becoming.

Throughout the entire set, she is charming, confident and showcases exactly why she is becoming a rising star by not faulting a single note. There is a surprising mash up of Eminem & Rihanna’s ‘The Monster’ and Drake’s ‘Just Hold On I’m Going Home’ that tears the roof off as the beat drops. Some of the youngsters in the front rows genuinely don’t know whether this should be happening or not as they are pushed around slightly from the inadvertent mosh pit that arrives. Yep, a mosh pit at a Foxes concert. Her American smash with Zedd is also displayed tonight in the form of ‘Clarity’.

‘Echo’, ‘Beauty Queen’, album title track ‘Glorious’ and a stunning rendition of ‘Let Go For Tonight’ (which closes the set) all showcase her amazing vocal talents and songwriting down to a tee. The audience don’t want to let her go. The noise in between the set and the encore is loud to say the least. If anyone was a casual fan before tonight, then it would be criminal if they weren’t a convert by the end. The encore is simply made up of her Rudimental duet, ‘Right Here’ is thrown out in tot he room with the audience singing back almost note perfect along with Foxes herself.

A homegrown talent that is rising rather confidently and swiftly, yet she is nothing short of deserving of it. A stunning performance was displayed tonight, and one that will proceed on to the festival circuit without a chance of hesitation. With the confidence of her debut album behind her, great write ups and support from everyone she collaborates with, this is one young lady who cannot do any wrong right now. If you don’t catch her at a festival over the summer, her next appearance will be on a forthcoming episode of Doctor Who, again bringing her talents to a brand new audience. Foxes truly is ‘Glorious’.