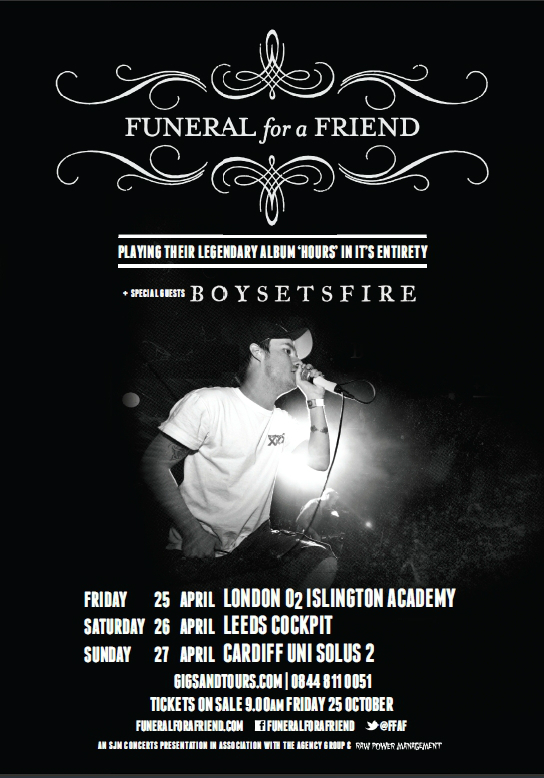 Following up the re-release of the band’s first EP ‘Between Order And Model’ through BoySetsFire’s End Hits Records, Funeral For A Friend have announced a handful of UK dates in April next year with support from BoySetsFire. As Matthew from FFAF explains – “It’s taken so many years but to finally say that we’re going on tour with BoySetsFire again puts a huge smile on my face. I have loved this band through every record they’ve released and feel honoured that I can call them dear friends. They are a huge musical/lifestyle inspiration and getting to see them tear it up is going to be incredible!”

Josh from BoySetsFire adds “I cannot believe how excited I am about this tour. Funeral For A Friend and BoySetsFire? I would go to this show, I would buy a ticket. Seriously though We are very excited about touring with our friends in Funeral For A Friend. It will be one for the ages. Please come and join us.”

These dates will see Funeral For A Friend play their album ‘Hours’ in full. Tickets will be on sale from Friday 25th October at 9am.

Funeral For A Friend are set to reissue a re-mastered, remixed and expanded version of seminal first EP ‘Between Order And Model’ through End Hits Records / Mighty Atom on 18th November. They’ve also just unveiled a live video for the classic track and fan favourite ‘Juno’, which was filmed during recent live dates in Europe. Check that out.

When Funeral For A Friend released their debut EP ‘Between Order And Model’ in 2002 a new genre dubbed “Screamo” was on the rise and the band became its first European flagship. Their mix of dual guitar attacks, the clean/shouting vocals, three minute neckbreakers and the occasional thrown in but breathtaking quiet parts makes the five piece the right band at the right place at the right time.

The newly remixed and re-mastered four original songs were enhanced with three rare/unreleased tracks from the same recording session and live versions recorded by the current line-up. A 12 page booklet features never before seen pictures from the bands archives and liner notes from singer Matt Davies, Josh Latshaw (Boysetsfire) and Oli Sykes (Bring Me The Horizon).

‘Between Order And Model’ will be available as Digi-Pack CD and for the first time ever on vinyl (limited to 1000 coloured copies).

Everybody who pre-orders ‘Between Order And Model’ through Impericon and Sandbag UK immediately receives an acoustic version of ‘Red Is The New Black’ as an MP3 download.