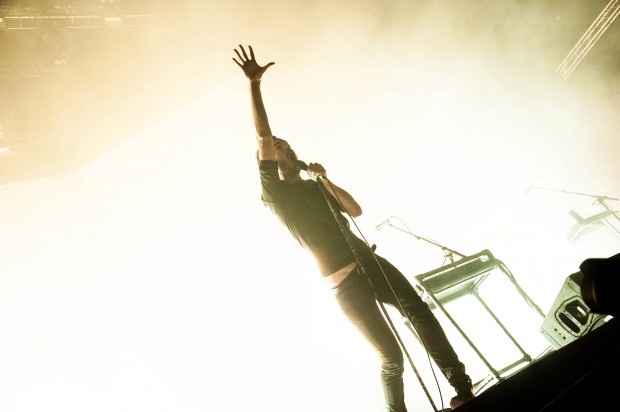 There’s something special about seeing Editors live. The Birmingham based band are just about to kick off a UK tour and will be playing rather intimate dates across the country. Tonight however, they are in the middle of a sold-out European tour. Not only that, they have elevated to arenas on the continent and are putting on a show worthy of the setting. Tom Smith tweeted shortly before showtime saying that this is the biggest show to date that they have ever played (bar festival appearances), a sold-out 18,000 venue, all here to witness the live spectacle of the Brummies.

Things kick off with ‘Sugar’ and ‘Someone Says’. Tom is in a playful mood from the second he arrives on stage, arms outstretched hearing 18,000 people screaming for you and your band must be something rather special to take in. He is one of the most fascinating frontmen to watch. He is captivating and his overall performance borders on being an “art piece” at times. As ‘Sugar’ builds to the explosive chorus, we are treated to pyrotechnics that illuminate the stage from back to front. You can hear the low hum of the audience under the band all going “ooh” as the first wave goes off. Clearly the band are pulling out all the stops. ‘Smokers Outside the Hospital Doors’ gets the same treatment with extras raining down from the lighting rig overhead.

‘Eat Raw Mean = Blood Drool’ sounds stunning in this setting. It has morphed from an electro post modernism escapist sounding track into something that even modern day Radiohead would like to have in their catalogue. Tom has lost himself in the music and is prowling across the stage like a hungry tiger, coming onto the stage extension and reaching into the front rows.

Two Hearted Spider’ sounds as phenomenal as it did from the debut performances, the tension in the air of the arena as we all fall under the bands’ spell is impressive. ‘All Sparks’ is dusted off and sits comfortably alongside the dancey enthused ‘Formaldehyde’. One of the night’s highlights is the arena reaction as ‘A Ton of Love’ opens up. Again, the spectacle of 18,000 people all singing along to the guitar riff and clapping along wildly is something I thought I would never see with Editors on this scale.

‘An End Has A Start’ and ‘Bullets’ encourage the audience to pick up the pace even more. The front rows and even the sides are bouncing like no tomorrow. Tom is all over the stage both with and without his guitar, clearly enjoying this highlight of his career to date. ‘In This Light and On This Evening’ has shifted from being the opening track on the last tour to this mid-set place but is still as stunning and powerful as it always has been. A perfect ending for a fraught and intense yet very enjoyable set so far.

The band leave the stage and leave Tom and Justin Lockey alone. ‘The Phone Book’ sounds incredibly delicate live, fears of it being lost over talkers in an arena were unfounded as for the whole, it silences them. Justin’s solo seems to stun the talkers into realising the band are still playing. It doesn’t phase them one bit that chatterers are about. Next we get an impromptu setlist addition, an acoustic performance by Tom of ‘No Sound But The Wind’. Again, it silences the huge arena and leaves the crowd begging for more as the rest of the band return. A perfect example of the two sides of Editors, the loud and the quiet. An acoustic tour by them would certainly be an interesting feat.

‘Munich’ seems to bring the whole arena back to life in an instant and sounds louder and meatier than ever. ‘The Racing Rats’ is another song that seems to be progressing live too. It’s gone from being a semi-ballad into this beast of a track. The bass and guitars lift and drive the song like never before, Ed Lay’s drumming sounds thunderous and Tom switches from piano to again standing tall on the small stage extension crooning his way into the arms of his followers. New single ‘Honesty’ closes proceedings and does so in a very typically Editors fashion. Dark, broody, intense and fun all in one package. Be warned, you will get covered in so much confetti during this song that you’ll look like an extra from a Doctor Who Dalek-themed ball.

The encore sees ‘Bricks and Mortar’ open up only for the mood to dip with a stunning vocal from Tom on ‘Nothing’. But the big finale, which sees the return of the pyros and pretty much the entire band up on their feet, enjoying themselves, paying like there is no tomorrow is brought to us by ‘Papillon’. They give it an incredible workout pushing the dance element and extending it to around the 10-minute mark. The final explosion of cannons and fire with more raining down again from the rig above the stage signals a huge reaction from the audience. There is not a soul who is not up on their feet applauding the 2 hour show Editors have just given. To see the “little band from Brum town” sell out an arena and put on a show like that was incredible. I am jealous of those going to the UK dates as this will be a stunning show to see replicated into the more intimate arena. Go forth and please, enjoy it.