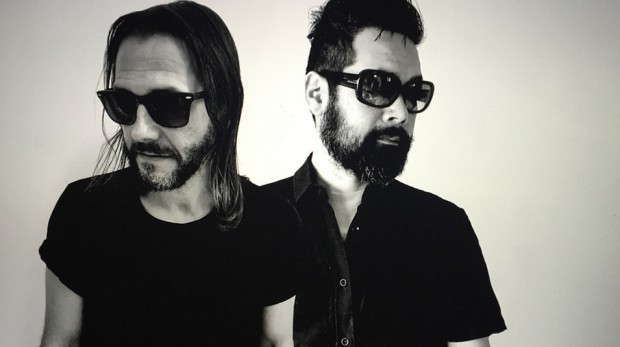 Welsh legends Feeder have been a constant on the music scene for 20 years. From the dizzying heights of debut ‘Swim’ through to the last opus released in 2012 ‘Generation Freakshow’. They have provided the soundtrack to lost summers and cold winters with the likes of ‘Insomnia’, ‘Just The Way I’m Feeling’, ‘Buck Rogers’ and ‘Just A Day’.

It came as a surprise that after 16 years of non-stop touring and recording, the band took it upon themselves to undertake a hiatus. Initially taking a year off, the band became restless and saw Grant release two solo albums as well as touring across the UK, Europe and Japan whilst bassist Taka took on work with multiple projects in Japan.

The band have now returned with a bang, having issued the first single ‘Universe of Life’ to great acclaim, the latest release ‘Eskimo’ sees the band back on rock form with a hint of the blues added to their sprawling sound.

Ahead of their incredible new album ‘All Bright Electric’ which is released this Friday, 7 October, we took a few minutes out with frontman, Grant Nicholas in the middle of the bands’ soundcheck for the opening night of their first UK tour in 4 years to discuss the bands’ return.

Hi Grant, how have you been? It has been so long. Yeah, I know. It’s been good; it’s been four years since we toured last. I think our last gig was at Brixton Academy, The Generation Freak Show Tour. and since then, I’ve done two solo records; Taka has done a few things out in Japan.

Yes, you’ve both been so busy over the last four years, what have you been up to? Yeah, well we didn’t really plan to have four years off, it was meant to be one year and I think Taka was like “Come on, what’s going on?” I did about fifty shows, I went to Europe and Japan and I was really pleased with the first solo record. I just wanted people to know that it wasn’t a little hobby. I am very serious and passionate. But anyway, I am back to Feeder now and we are looking forward to the tour and obviously to the new record coming out.

Well, you’ve already been so well received; Feeder fans have welcomed you back with open arms. It’s been great actually, we were a bit nervous about that, and we are of course performing in Birmingham on the 4th of October so we are looking forward to that because two of our members are from Birmingham.

Of course, now I have to ask – Was it difficult to jump back into playing together again? You’ve been performing for twenty years, but was it easy to continue writing and performing together after a four year break? Well after the end of my solo stuff, they were telling me to get back to Feeder so I just started writing, almost straight away after my last tour I did for my solo career; obviously it took a while adjusting from a very acoustic sound, like a very mellow band back to the more riffy stuff for Feeder but after a week or so, I had written two or three songs and actually one of those songs is now the current single called ‘Eskimo’. So I think doing my solo stuff has brought something new to the Feeder camp. My approach has been much more relaxed and we’ve tried to bring that to the new record without all of the usual pressures and big labels. We have kind of done it our own way. It has been a really nice project. I actually did most of the album in my back garden, in my little studio which is called the treehouse so it’s a bit of a home grown project and I think it has come out really well.

It’s the best way to bring an album together though isn’t it? Through the grass roots so to speak. It is, exactly. We were going for sort of an organic analogue sound. We wanted to touch on bands that we loved in the 70’s; Black Sabbath, Led Zeppelin, and stuff like that. They were influences on Feeder and for me as a guitar player and I just love the way those records sound. We weren’t trying to sound like a retro band or anything, but we wanted to get a bit of that flavour whether it’s on the drum sounds or in just the way we approached the record.

Wonderful, now the video for your current single ‘Eskimo’ I hope you don’t mind me saying this, but I thought it was very James Bond with all of the visuals, it is really beautiful. Oh cool, yeah, I hadn’t thought about that, hey, there’s nothing wrong with James Bond. We were trying to produce something psychedelic, I think the reference we gave the video team was something that had the essence of psychedelic Andy Warhol with our movement but with a more current edge. If you can imagine White Stripes mixed with Velvet Underground, that sort of visual; that was our reference. and I think the team did a really great job because it was very last minute, I was just about to go on holiday and it was like, we really need to shoot the video now. and we literally had three or four days to turn it around. They did a brilliant job.

Did you guys as a band have much direction in the artwork or your music videos? Not really, I mentioned the vibe for the music video and suggested silhouettes and the team kind of went from there. The only thing that I asked to try on the day which was used is the bit where you’ve got the three heads, that sort of Queen shot, and that was just an idea I had, and it came out quite well. We had a really good animator doing all sorts of effects, it was really well put together and it was shot on a simple white background. It is always the simple ideas that end up being the best ones after.

The first major gig appearance of Feeder this year was the Isle Of Wight Festival, how did you find that? Oh it was great! We were really nervous before the show, we hadn’t played together for so long and we just thought, let’s play it safe and give people loads of hits and singles and it worked really well. It was just like a reminder to ourselves. But it is quite hard at the moment, the album isn’t out until October 7, so we can’t do too much stuff from the new record because people want to hear the older stuff as well. So I think the next tour we do once people have had time with the new album, then we can perform more of it. So most important at the moment, is getting that setlist balance right.

I’ve been meaning to talk to you about you and your setlists. I read somewhere that you love creating setlists and that you have a love/hate relationship with them. Oh no, I definitely don’t love them. It takes me hours! I’m still doing the setlist for tonight’s show. Ugh, I am obsessed with it because I know that if I get it right, it does make a difference and then sometimes you can do something completely not right and every gig is different. and I am not very good to sticking to the same set. I’ve got question marks by lots of songs and sometimes I can see the crew looking at me in complete terror during a gig thinking ‘Oh which song is he doing next, which guitar does he need?’ Yes, definitely a love/hate relationship with the setlists.

You also have a huge back catalogue of songs, are there songs that you will want to play at every gig or songs that sometimes you’ve just had a bit too much of when it comes to performing them? Well yeah, of course, I love the reaction from the crowd to songs like Buck Rogers, but somedays I feel like I don’t wanna be playing the classics because I’m concentrating on our current material but I really appreciate that people bought our older records and it’s always great when a crowd remember the lyrics.

Feeder release their brilliant new album this coming Friday 7 October and are currently on tour across the UK. Tonight they play in Birmingham before continuing to criss-cross the country calling at Nottingham, Bristol, Cardiff and Exeter amongst others.

Check out the new video to ‘Eskimo’ now: