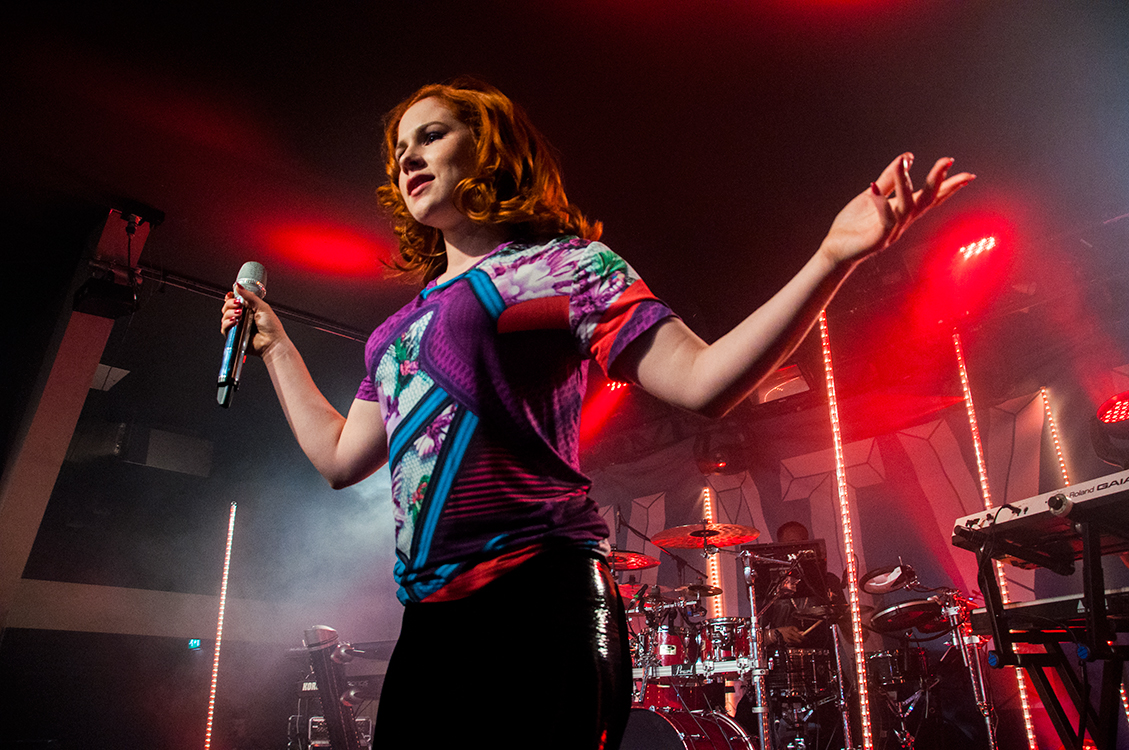 On what turns out to be a pretty wet and chilly night in Birmingham, there are a tonne of brave people bracing the elements making their way to the basement of The Institute for one of the hottest tickets in town. Promoting the recently released ‘Little Red’ album, Katy B is making an intimate appearance ahead of a full scale UK tour in the autumn. Tickets for this show sold out pretty instantaneously and upon entering the venue, there is already a sense of anticipation.

Kicking proceedings off tonight with a short and sweet set is the wonderful Sasha Keable, one of the recent collaborators with Disclosure on the track ‘Voices’. It’s with this she kicks off her set, and really makes the track her own by playing a slightly more down tempo and soulful version. Her own material is incredibly intoxicating. Tracks Asking For More and Careless Over You from the recent ‘Black Book EP’ sounded impressive and hold a lot of hope for her future.

Just after the billed 8.30pm start, the lights fade and Katy’s band arrives on stage. The start the ball rolling with the intro of Hot Like Fire to some impressive lights flashing across the stage, Katy arrives, full of energy, arms aloft. With a cheery “hello Birmingham” launches straight in to the first verse. Her delivery is perfect, she has so much energy and vibrance, and above all, confidence. Her beaming smile even whilst singing is something few artists tend to do these days. She makes it look like it’s an enjoyment rather than a chore and it’s a pleasure to watch.

Tracks from the new album stand up well, most not having had a full airing until this run of intimate dates, but seriously sounding like we have known them for ages. 5am, Everything, Next Thing and Sapphire Blue sound pumped up, energetic and absolutely show off her vocal arrangements. Another string to her bow is that there is no backing vocals, no voice correction, again, everything you hear and see is 100% live. Another highlight from the recent album is without doubt the danceathon which has become Aaliyah. On record she is complimented superbly by Jessie Ware, tonight, she steals the show by performing this solo and making it sound even more phenomenal.

A nice little interlude mid way through the show sees her stripped back to just a vocal and an accompanying piano. Tumbling Down is introduced as one of her favourite lyrics and silences the room however, this is soon outdone by a massive singalong to recent single and again, a stripped back version of Crying For No Reason. Katy thanks us for the support with this single as it thrust her back in to the limelight and gave her the confidence to continue.

It is of course, the songs from her debut ‘On A Mission’ that brings the dancing on. Although cut down to only three tracks – to showcase the new album to full effect – it is by no means overlooked. Easy Please Me and a lively Broken Record that is interspersed with a cover of Let me Be Your Fantasy sees the room bounce and reverberate from the walls. The main set closes on “the first song that took me on my mission”, a subtle introduction to the sublime Katy On A Mission. This sees most of the room skanking to the low down bass that shakes the intimate venue and some nice interaction from Katy.

The encore starts with a heavy rendition of her duet with Magnetic Man on Perfect Stranger. But the final highlight, of which there has been many, is left for a frought and lively version of Lights On. Katy is bouncing around the stage still having so much energy, feeding off the audience’s vibes. Her parting smile is smething of pure adoration for those in the room tonight. Countless times by both herand Sasha Keable, Birmingham had been declared as their favourite of the tour so far. The energy portrayed tonight, the delivery and the sheer performance quality alone, her autumn tour will be a definite to catch.