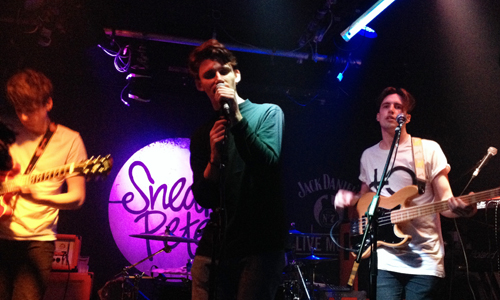 Four dates into their A Rush of Blood Tour, Bristol-natives Coasts take to the stage at Sneaky Pete’s, one of Edinburgh cosiest venues. It is the band’s only Scottish date on the tour, and their second time playing in the country’s capital city. “It has rained both times; it’s not a regular occurrence is it?” jokes the band’s lead vocalist, Chris Caines, before introducing a string of new songs.

Opening for Coasts are two Scotland based bands; first up is Edinburgh’s own Quiet as a Mouse. While the audience crowds the bar, the tiny stage is packed with Marshall, Orange, and Peavey amps and guitar cases and redundant equipment trickle off the side of the stage lining the far right wall. A pipe spits out fog unceremoniously onto the stage diffusing the coloured lights. Emerging from the crowd the four members of the opening act climb over the amps and onto the stage. Their sound is like Sonic Youth meets Marcy Playground in the early days of Seattle Grunge. What seems almost too in-your-face about their energy could benefit them with the right crowd if they channelled their inner stick-it-to-the-man attitude just a little bit more.

After the first opening act, Glasgow-based The Monty Hall Problem hop onto the stage with a much more fine-tuned atmosphere. Their unique fusion of modern indie rock with a classic rock n’ roll atmosphere draws the crowd’s attention away from the bar, and their energetic delivery gets heads nodding. For several songs the energy continues to build as the band lets loose, until midway through a particularly lively performance one of the drummer’s main cymbals goes flying through the air. The drummer’s face is priceless as the metal disk crashes into the lead guitarist’s amp. After a brief consult with the sound technician, Frontman Lewis Smith declares that the amp is broken and they end their set one song short.

The drummer and guitarist join the crowd at the front after packing up their equipment and Coasts take to the stage. Caines’ energy is intense as a lead singer. Without an instrument he is able to throw his body around the stage uninhibited, demonstrating the energy of their music and running his hands through his hair. His charismatic dancing filters out to the rest of the band who throw themselves around the stage in unison.  After a few familiar tunes they play a new songs, starting with ‘Let Go.’

They have a rougher and slightly grittier tone than their recorded music, adding an authentic edge to their music. Rather than sounding like indie pop, their live performance proves their credibility as indie rockers. Their dancing is infectious and it spreads to the crowd who subconsciously mimic Caines’ unique dancing style. During ‘Stay,’ the bassist’s microphone stand falls forward off the stage and several fans help pick it up again. Laughing, the bassist jokes at the end of the song, “The microphone didn’t really want to stay.”

Coasts slow things down a bit with a new song, ‘Don’t Let the Light Go Out,’ which will be on their debut album out in the summer. It’s an emotional tune, and afterwards Caines assures the crowd “That’s the slowest we’re going tonight, I promise.” He keeps his promise launching into their recent single, ‘A Rush of Blood’ which is one of the most energetic performances of the night.

Before ending the set with one of their first hit singles, ‘Oceans,’ they play another new song; ‘Golden City,’ unfortunately the vocals sound slightly out of key for this track and the instruments appear to be mismatched with the tone of Caines’ voice.  They all but redeem themselves with the next track, though. “Go out with a bang, yeah?” Caines prods as they start in on ‘Oceans.’ As much as the crowd appears to love the last track of the night, they know there’s been a song missing and they begin to chant. It’s not the usual “One more tune,” though.

“We want ‘Stoned’” they shout.

“Okay…ask and you shall receive…” Caines slyly replies into the microphone as the band begins to play the requested song. The wooden floor of the stage bows as the band jumps along to the music, and the crowd mirrors their passion, completely pleased with Coasts’ final anthem.