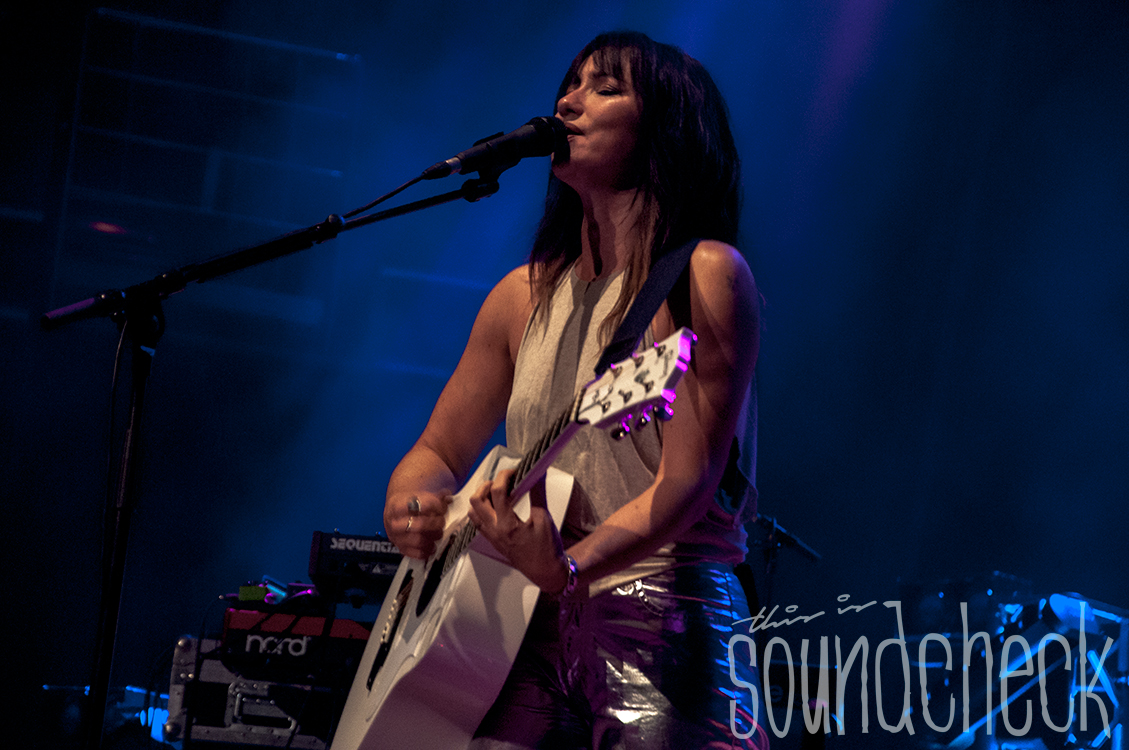 KT Tunstall graced the stage at Birmingham Symphony Hall on Friday 4 November to promote her brand new album ‘Kin’, with the cover of her new album as the back drop on stage and three platforms complete with a full drum kit, keyboards, synthesizers and a bass; the crowd were going wild with anticipation waiting for KT to take to the stage.

KT’s entry music was the remix of ‘Evil Eye’taken from her latest single ‘Golden State EP’ – the ‘Django Django Mad Drums Remix’; and while everyone’s eyes were stuck to the single spot light where she would be, KT bounced on stage with her three band members and kick started the night by performing a song from her second album ‘Drastic Fantastic’ – ‘If Only’.

After an exciting start to the night, KT made it clear to her audience how much she loves; performing in and the people of Birmingham and continues to tell the crowd that they need to imagine that they are all on a cruise to the Bahamas, to forget where they are, and to forget about work, “enjoy the music!”

The first four songs performed were taken from the second and third studio albums including classics such as ‘Funnyman’ and ‘Still A Weirdo’. KT is no stranger to performing with a band, but a lot of critics scrutinize other acoustic singer/songwriters for changing the sound to their music or “Disappointing fans”. However, KT is definitely the exception and it’s safe to say the whole set was executed very well.

Half way throughout the set, KT was left to her own loop pedal and tambourine devices where she filled the stage with her beautiful sultry vocals and stunning guitar work as she performed ‘Other Side Of The World’, ‘Invisible Empire’ and of course the crowd favourite – ‘Black Horse And The Cherry Tree’ where she was then joined by the band once again to mix the 2004 chart hit with a cover of The White Stripes, ‘Seven Nation Army’.

As usual, not only was her performance flawless, but KT’s on stage humour and interaction with the crowd is enough to make anyone smile. The 41 year old Scot shared stories about her new home in the United States and joked about her encounter with Dave Grohl (Foo Fighters) A.K.A “The Hair”, shopping in pyjamas around the US and not being recognized by a cover artist.

New single ‘It Took Me So Long To Get Here, But Here I Am’ was performed with such gusto that here voice echoed around the venue. Proving the the old hits sit perfectly alongside the new, she even teases us with a guest appearance from non-other than James Bay who duets with her on album track ‘Two Way’. Alas there is no show from Mr Bay, but bassist Solomon Dorsey takes the spotlight and matches the vocal duties with ease.

The main set ends on a raucous rendition of ‘Saving My Face’ which sees the audience up on their feet and dancing in the aisles. As she disappears off stage, the audience are calling for more. It is only a few moments before the band return for an encore.

Kicking off with a lively version of ‘Fade Like A Shadow’. KT is full of beans and ready for a party. Next we get a track from the aforementioned ‘Golden State EP’ introduced as a “Rock track in honour of the Midlands’ Rock Heritage”. Cue loud guitars, drums and bass with distorted vocals as Symphony Hall transforms from a classic venue in to a rock n’ roll hall. The stalls are up on their feet and crowding around the front of the stage as ‘The Healer’ shakes the venue to the core. After saying goodbye and informing us that she will be back soon, the pounding bassline of ‘Suddenly I See’ bows the gig out in fine style.

KT Tunstall is an exceptional performer and will remain one of the UK’s classiest exports for many years to come.