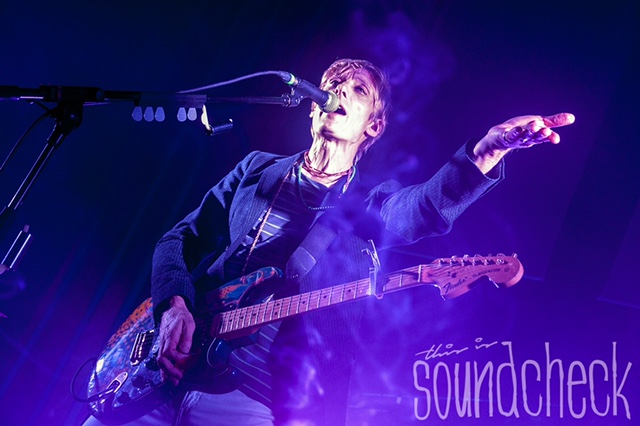 It’s sometimes hard to believe that it has been 20 years since we were in the middle of the ‘Cool Britannia’ phase that was dubbed ‘Britpop’. Although very British in stature, the music was far from ‘Pop’. One of the biggest selling debut albums of 1996 was the psychedelic roller coaster that was ‘K’ by Kula Shaker. Lead by the charismatic frontman Crispian Mills (son of the legendary actress Hayley Mills), they were one of the hottest new acts to embrace the British Music scene in the wake of Oasis and Blur.

Fast-forward 20 years and Kula Shaker have returned from a hiatus and given us a brand new album titled ‘K2.0’ which was dubbed as the natural progression from the hive of activity of that debut album all those years ago. After its initial success early this year, the band decided it would be worthwhile revisiting their past glory and announced that they would be playing ‘K’ in all of it’s glory alongside sublime cuts from their back-catalogue.

As the band arrive on stage tonight, the room anticipated that they would be playing the album in track order from start to finish. Instead they open with a groovy cover of The Beatles classic ‘Sgt. Pepper’s Lonely Hearts Club Band’ which works incredibly well with the bands style. They manage to segue this in to a track from 2016’s ‘K2.0’ called ‘Let Love B (With U)’ which has a sprightly 60’s poppy feel to it and again suits the flow from their Beatles opener.

Crispian addresses the crowd, arms aloft and outstretched towards the audience, incense sticks burn away at his feet carrying their scent over the front rows. Mills informs us that they intend to play the album as a whole but intersplice the tracks with other tracks that were written around the same time that either appeared on subsequent albums or b-sides. Holding a vinyl copy of the 2016 reissue of ‘K’, he walks over to Harry Broadbent’s whurlitzer as a vinyl player is placed on top. Joking stating that they will literally play the album from start to finish. As the needle hits the vinyl, the lights dim and Crispian crouches down in the all familiar pose, complete with slide as Alonza Bevan’s thunderous bass and Paul Winterhart’s drumming play the opening part of the mighty ‘Hey Dude’. Mills’ guitar work is phenomenal, it’s easy to forget how accomplished a player he is. The Wah pedal grinds and suddenly the song kicks in to life with the all familiar riff.

The band play through most of ‘Side 1’ which includes the tracks ‘Knight On The Town’, ‘Temple of Everlasting Light’, ‘Smart Dogs’ and ‘Into The Deep’. These are played with absolute precision, you could describe it as listening to the album, but the vocals are far superior and the guitar solos detract from the recorded versions only to supersede them. This is a band that is tight but at the same time enjoying immensely what they are doing. The vibe from the audience is driving the band more and more.

Crispian addresses the crowd again and announces the first distraction from the run-through. We are about to get a song which was written at the time of ‘K’, but the demos never sounded how they wanted it to sound. Alas, the track was released on the follow up, the mystical ‘Peasants, Pigs & Astronauts’ and subsequently released as the third single from it. They then launch in to a lush acoustic rendition of ‘Shower Your Love’. We are next treated to two fantastic B-sides from the era. ‘Under The Hammer’ is a great rock n’ roll song of classic status, a Hendrix-esque solo and Zeppelin style vocals. This is followed by the fun and guitar heavy ‘Gokula’ which we are informed was written as the band attempted to write a ‘Theme’ song for themselves under record company instruction.

Mills returns to the vinyl and swaps over to the second side, thus informing us that it is back to business as normal. We get the Indian instrumental ‘Sleeping Jiva’ which sublimely leads in to their second single, the glorious ‘Tattva’. Strung out Mills opens his arms for the refrain of “acintya bheda bheda tattva” as the song breaks down only to kick back in with the famous riff. This half is again filled with classics such as ‘Grateful When You’re Dead/Jerry Was There’, ‘303’ and the sublime ‘Hollow Man (Parts I & II). Having completed the album, it is only fitting that they finish on the song that completed that era for them and was released as a standalone single after the album, a cover of Joe South’s ‘Hush’.

The sheer magnitude of the musicianship on offer tonight leaves the crowd begging for more. They may have done what they said they would, played ‘K’ in full and thrown in some extras but it still doesn’t feel like the show is over. The band graciously return to the stage and begin an encore with another slice from this years’ new album, the acoustic ’33 Crows’. Showing that they are still relevant and playing to an army of fans, this calls for a mass singalong of the gentle track. This leads in to a rendition of their comeback single, the mantra heavy ‘Infinite Sun’. This again sees audience participation and a mass clap along to the groove.

Another classic cut arrives in the shape of the jazz/soul-/rock fusion of ‘Great Hosannah’. The blues riff gives way to gospel type vocals and appears to be a firm live-favourite amongst the fans in the room. The final song of the encore seems to throw the audience; “How did they not play this earlier?”, “Are they playing this again?” are the questions that spring to mind, but, a moment of clarity sees that one song was indeed missing (rather glaringly in retrospect) from the ‘K’ playback. The audience literally do go wild as the opening notes of the ever mighty ‘Govinda’ play out. Famed for being the only song to ever storm the Top Ten to be sung entirely in Sanskrit, it’s amazing to see the development of this song and how culturally accepted it has become. Tonight’s rendition is a sprawling monster and nears the 8-minute mark as it winds down in to the final scream from Mills of the last lyrics and instruments crash to a halt. The audience again erupt and the band take a bow, signalling the end of the show.

After a few seconds however, the band again return to the stage for a final encore. A festive performance of a single they covered a few years ago and put out as a free download, a cover of The Beatles ‘Christmas Time (Is Here Again)’. This is interspersed with snippets of ‘I’d Like To Teach The World To Sing’ and Oasis’ ‘Shakermaker’. A festive delight to all in attendance.

Kula Shaker may have fallen a little out of favour since they burst on to the scene way back in 1996, but they remain an impressive live act and a phenomenal force when it comes to classic singles from that era. Only time will tell what the future holds now for the beloved band.