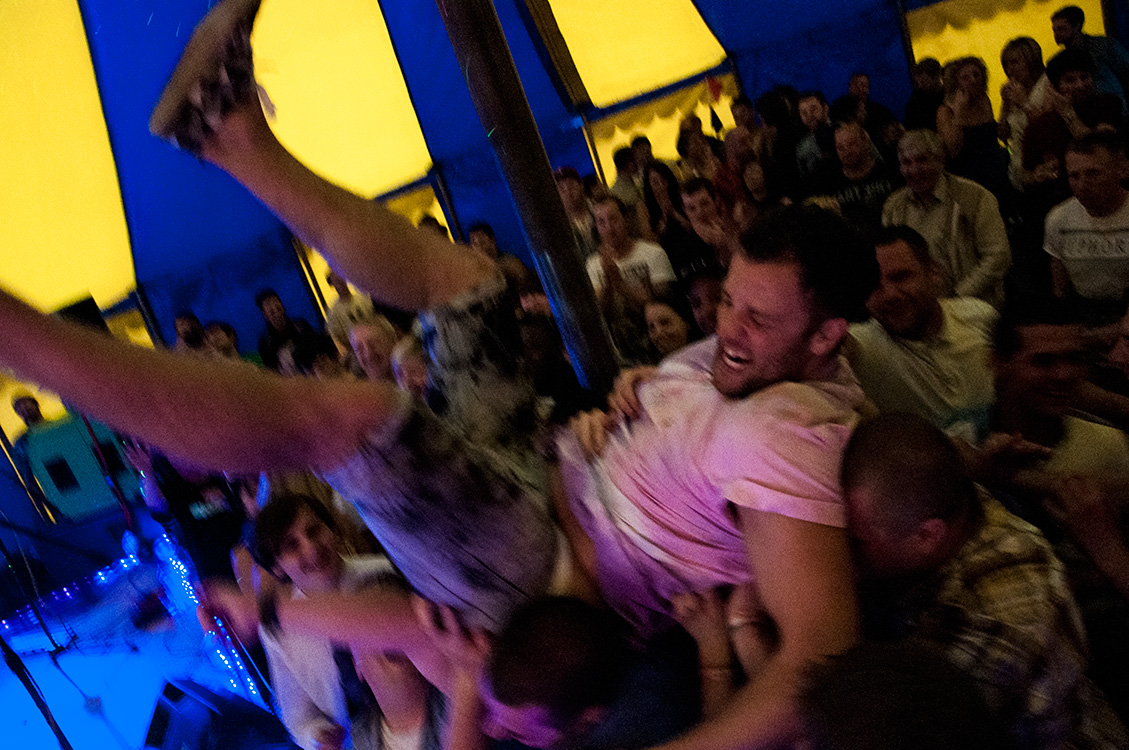 On one of the first hottest days of the British Summer so far, I am invited down to The Bowling Green Pub in Lichfield for an afternoon and evening of the best of local music. The first ever ‘Lichfield Rocks Festival’ is taking place and aiming to raise funds for St Giles’ Hospice.

I am met on arrival by Stubblement singer Kyle Perry who is warm and accommodating, greeting me like an old friend. A brief chat later and I am off on my own. First up for me are local Cannock lads Lightfire. Pitched up on the intimate acoustic stage set in the pub itself, it is a contrast to see them in this manner having caught them ‘full band electric’ the week previous. The vocals are warm and distinguished, the guitar and bass playing add a more subtle rhythm. The tracks sound more delicate until the punch comes in and the vocals are screamed. It becomes a brilliant wake up for what feels like a sleepy day so far for me. Next up I make my way outside into the main arena of the tent and it’s time to catch The Arkhamists. These guys have the appearance of a young Nirvana and have the sounds combined with elements of Led Zeppelin. They are pretty special and manage to attract a decent crowd with the rock riffing.

I make my way back into the bar as I had heard good things about the next act on the acoustic stage. The twosome of Barricades Rise had my attention before I walked in the door. Over the fading sounds of the mainstage I could hear some growling, gravelly vocals and feet stamping, I walk in and these two lads have the audience pretty hooked. Bashing the life out of their guitars, singing the rootsy blues like no tomorrow and their only crime was that their set was too short! Definitely one of my personal highlights of this festival so far. Next up I find myself back at the mainstage in time for Since Monroe to entertain the crowd. Their sound was nice and rocky, for me I think the bass was a bit low in the mix. But these young lads pulled out all the stops and engaged with the crowd easily. The one thing I liked about this festival was the ease of getting around the site, yes it was in a pub and it’s car park, but I’ve seen places do similar events and over complicate the place. Lichfield Rocks had such a laid back attitude it was brilliant. The staff were kind and accommodating, willing to help and talk to anyone. The food stalls, face pianting, press area and even the general bar had such a vibrant atmosphere when walking around. Despite it being one of the hottest days so far this year, everyone is chilled and there is no bad atmosphere of any sort that you would normally expect at a festival.

After I’ve grabbed a pint at the bar, next up for me is the young starlet Amy Key in the acoustic zone. I only catch the last couple of tracks from her set, but her vocals are loud and clear, coupled up with her guitarist, they are a good pairing. Dropping in a cover of Johnny Cash’s ‘Folsome Prison Blues’ is a brave move to many, but she carries it off with ease. Next I hurtle over to the main stage just after local heroes Of Kings And Captains have launched into their first track. There is another decent crowd now, possibly due to their recent spot in the limelight of supporting Bon Jovi on their UK tour, but also because the music speaks for itself. The lads have managed to finely craft their stage show in a short space of time and again have become a highlight of the day so far. As I make my way back towards the bar to grab another drink, I am sidelined by the end of Brains For Breakfast‘s set on the acoustic stage. His delicate vocals mixed with Ukelele and acoustic guitars are something a little different. My crime is I wish I had caught more of this young lad. I will definitely be on the hunt for future gigs.

Next up are Birmingham ladies and gentlemen that form the acoustic indie of Boat To Row in the main tent. I liked their folky tendenceis and I always give praise to anyone who can get a violinist up on stage with them. It’s such an underrated instrument in the modern rock/indie genre. Boat To Row remind me of a subdued Dry The River. They have great melodies and interesting lyrics that reach in and tug on the heartstrings. It’s at this point I take a step back and saok in the atmosphere of the site for a few moments. It is nice to see a small event so busy, well supported and everyone enjoying themselves. The staff are doing a fantastic job of keeping everything running to time and moving. The punters are filling up the main tent slowly now, the bar is full, drinks are flowing and everyone is looking after each other. Strangers coming up to me and engaging in conversation is a reassuring thing, especially with no animosity attached to it.

The acoustic stage has come to an end now and the main stage is looking pretty full as I make my way in for the sub headliners of local high flyers JAWs. Again, as with Lightfire, I had caught these guys the week previously and was mega impressed by them. This was exactly the same. Almost as if during the week they had pushed themselves up a gear. Their brand of Birmingham based indie/shoegaze is getting them noticed in the right ways. Following through on the path laid by Peace, JAWs are engaging and seem to have brought along a good few fans. Highlights are ‘Donut’, ‘Toucan Surf’, new track ‘Gold’ and the epic ‘Surround You’ which closes the set. The crowd has swollen to almost capacity levels now and the atmosphere is electric. The party is almost over, but the vibes are going strong.

Finally, arriving on stage like the homecoming heroes are headliners and event organisers StubbleMelt. Their set is absolutely electric. The tent is packed out and everyone is partying like there is no tomorrow. Kyle Perry is the enigmatic and lovable frontman. Interacting with the crowd to the point of diving in and playing a formidable guitar solo whilst crowd surfing. Video cameras are out in force forming footage for part of an upcoming video. Although they are a relatively new band in terms of record deals and the like, these guys are performing with so much charisma and energy you would think they’ve been around for years. Absolute professionals. The set ends with yet more stage diving, a mini stage invasion and the trashing of Kyle’s Dad’s guitar… this will definitely go down in Stubble-history as a “I was there then” moment. With performances as perfect as this, these guys will go far without a doubt.

So to conclude, Lichfield Rocks was a bargain family day out. Music and entertainment for everyone to enjoy. I really hope that this is not a one off. It is very rare these days to find an event that has so much planning behind it that it actually runs perfectly. The money raised towards St Giles’ Hospice totalled over £2k which in itself is applaudable and impressive. Not only have the lads of Stubblemelt got the ability to create fantastic tunes, they have the hearts of saints. Bring on round two next year!