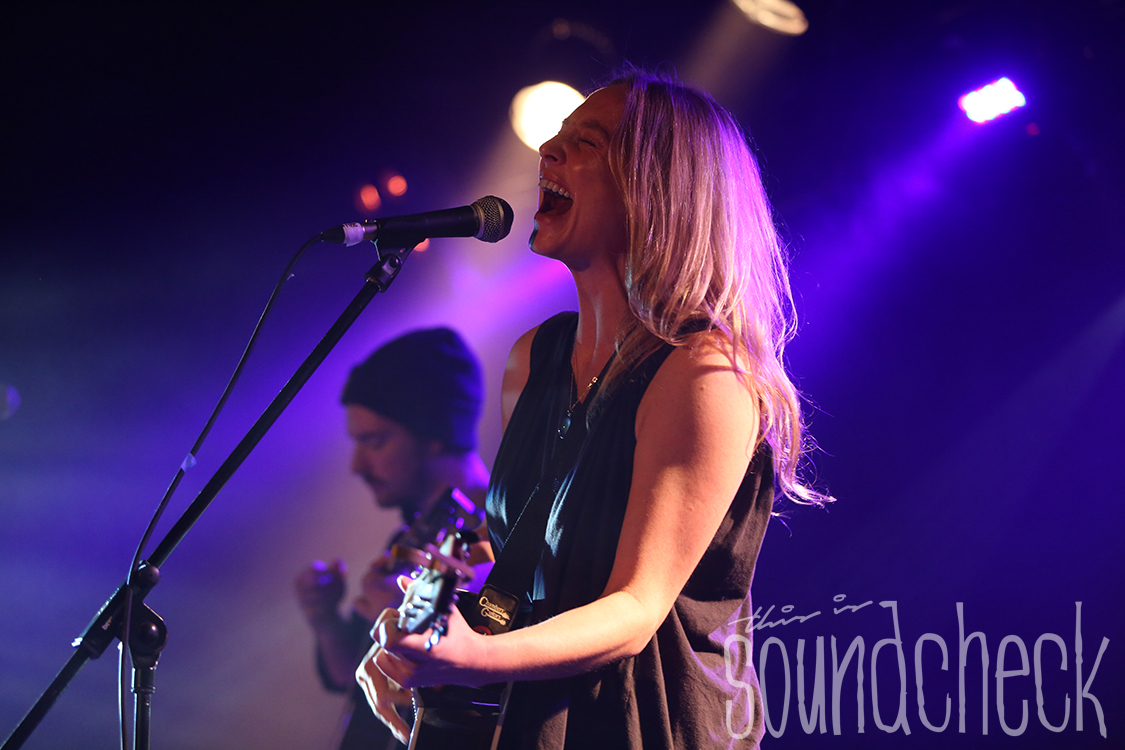 This gig was always going to be excellent as both of these acoustic, folk-rock artists already featured high on my list of best ever covers: Teddy Thompson for ‘Poor Boy’ and ‘River Man’, dominant tracks in BBC 4’s poignant 2010 ‘The Songs of Nick Drake – Way to Blue’ tribute, and Lissie for her audacious, impeccable cover of Led Zeppelin’s ‘Stairway to Heaven’ and tender rendition of Fleetwood Mac’s ‘Go Your Own Way’.

Of course Teddy Thompson’s status as support, allowing for his folk royalty pedigree, son of Fairport Convention’s lead Richard Thompson, hinted at confirmation of the stellar state of Lissie, who was returning to the UK six years after her debut album ‘Catching a Tiger’.

As sonorous, accomplished and professional as Teddy Thompson’s set was, the reaction, tone and lighting seemed a little lacklustre, throughout his 40 minute set, until his final song, a cover of recently lamented Leonard Cohen’s ‘Ballad of the Absent Mare’. Recalling his last meeting with Cohen where he had confessed to his hero that he had gone country, Teddy summoned a stand-out, near acapella, haunting encore with lyrics and cell phone balanced delicately on his guitar. Complimented later for being ‘a cool dude’, there was no denying his vocal talent.

To see both artists in so intimate a venue was definitely a privilege and from Lissie’s first notes, her partisan audience was spellbound. Just over a year ago, Lissie said goodbye to life in Ojai, California and with good effect as the inspiration of freedom on her clearly beloved Iowa farmland has seen two albums appear, first ‘My Wild West’ and then its stunning stripped back companion ‘Live at Union Chapel’.

‘Hero’, ‘Further Away’ and ‘They All Want You’ immediately caught the crowd’s attention, played with such enthusiasm that a string on her guitar sprung on the start of ‘The Habit’. As guitarist Nick Tesoriero left the stage to run repairs, Lissie stole the room with a version of ‘Ojai’ – originally intended for the encore – that drew a reverential quiet and whisked the audience from the urban confines of Birmingham straight over to her Iowa farm fires.

With guitar string restored but hanging in the haze, ‘The Habit’ could be completed. Lissie’s voice was powerfully piercing and the clacking of her heel on the stage soon become a familiar, pleasing energy. By the time ‘Shameless’ appeared, her audience was fully captivated, so much so that one member cried out: “I love you, Lissie.” With a warm riposte and slight embarrassment – “I can tell you are so enthusiastic” – Lissie was into ‘Everywhere I Go’, with such resonance.

The beautiful harmonies of ‘When I’m alone’ bounced along next with the haunting ‘Bully’ to follow with its hint of Edie Brickell. Respected in her own right as a brilliant songwriter, Lissie’s love of covers is also noted and tonight’s rendition of the legendary Joni Mitchell’s ‘River’ was immense. Smooth, haunting and subtly festive, it added a wonderful warmth to a wintry evening and was received with a hushed reverence; Tesoriero’s tender guitar was a stunning complement.

‘Don’t You Give Up On Me’, an earworm from this year’s studio album ‘My Wild West’, and ‘Oh Mississippi’ – homage to where Lissie grew up – signalled time for one final track, ‘I Can’t Make You Love Me’, a Bonnie Raitt cover. Introduced with a ‘cheers’ and a ‘happy everything’, Lissie raised her tumbler of wine that had been sitting next to the filtered water she had drawn from over the evening.

Apologising for her ‘weird president’, the first of two songs in the encore was ‘Sun Keeps Rising’. Lissie pledged she would rock our faces after this tender song lamenting the death of her Aunt Laura, and she was true to her promise. ‘In Sleep’ rocked The Institute with Nick Tesoriero excelling again on guitar.

With the promise of new songs to be written in the new year, Lissie, seemingly the rebel daughter of Stevie Nicks, with the voice of Emmylou Harris, the aura of Lana Del Rey and the bounce of Amy McDonald left after casting, in her own words, ‘positive spirit from Trump land’.

Words and Photos by Mark Woodward