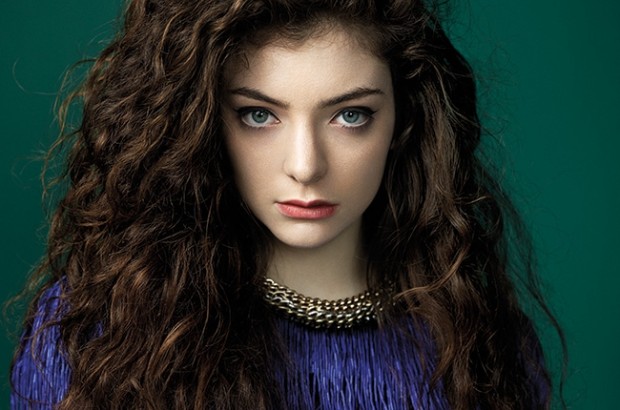 Standing fairly close to the back of Brixton Academy (the densely packed crowd making it hard to move much further forward), we discussed the dizzying speed of Elle Yellich-O’Connor’s rise to fame. Two sold-out London performances have confirmed 17-year old Elle, better known as LORDE, as the melancholic, stripped-back antithesis of the modern pop world.

The show opened without ceremony. As ‘Glory or Gore’ began, lights shone down to reveal the singer standing alone in front of a black curtain. With trademark dark lipstick and a loosely-fitting black suit and white shirt, Lorde’s trademark stylish-androgyny was instantly recognisable.

The staging was similarly minimalist. Playing with only a drummer and Jimmy Mac on percussion and keyboard, under a giant chandelier that wouldn’t have gone amiss in an Edgar Allen Poe horror story, the gothic undertone implied a maturity beyond both her years and lyrics. Dwarfed by three giant picture frames, it seemed as if Lorde was trying to capture and frame the moment. And I’m sure it is one she will remember forever.

The atmosphere was electric and the crowd mesmerised. Sounding deeper and huskier than expected, her voice lent itself perfectly to the smoky, antique feel of Brixton Academy and, despite her small frame, seemed to fill the whole room. Anyone looking for innovation might have been disappointed – there were no real surprises or new material, and musical variation was limited. But her voice compelled the audience to listen.

Songs came in quick succession, punctuated quietly and infrequently by teenage musings on urban life, the importance of music and not wanting to grow up. Sticking mainly to her first and so far only album, Pure Heroine, Lorde raced through her hour-long set almost without pausing for breath, meaning the evening flew by a little too quickly.

The entrancing but understated set ended as abruptly as it began. After a brief applause, she came back on stage for a three-song encore wearing a giant, metallic robe and cape – a playful nod to her most famous song (and highlight of the night) ‘Royals’ and strangely reminiscent of a teenage superhero. As gold confetti rained down and electronic fireworks raced across the stage, Lorde finally seemed to let go and indulge in a well-deserved moment of celebration.

As the lights went out, the final words of A World Alone – “let ‘em talk” – rang out across the room. And people are talking.