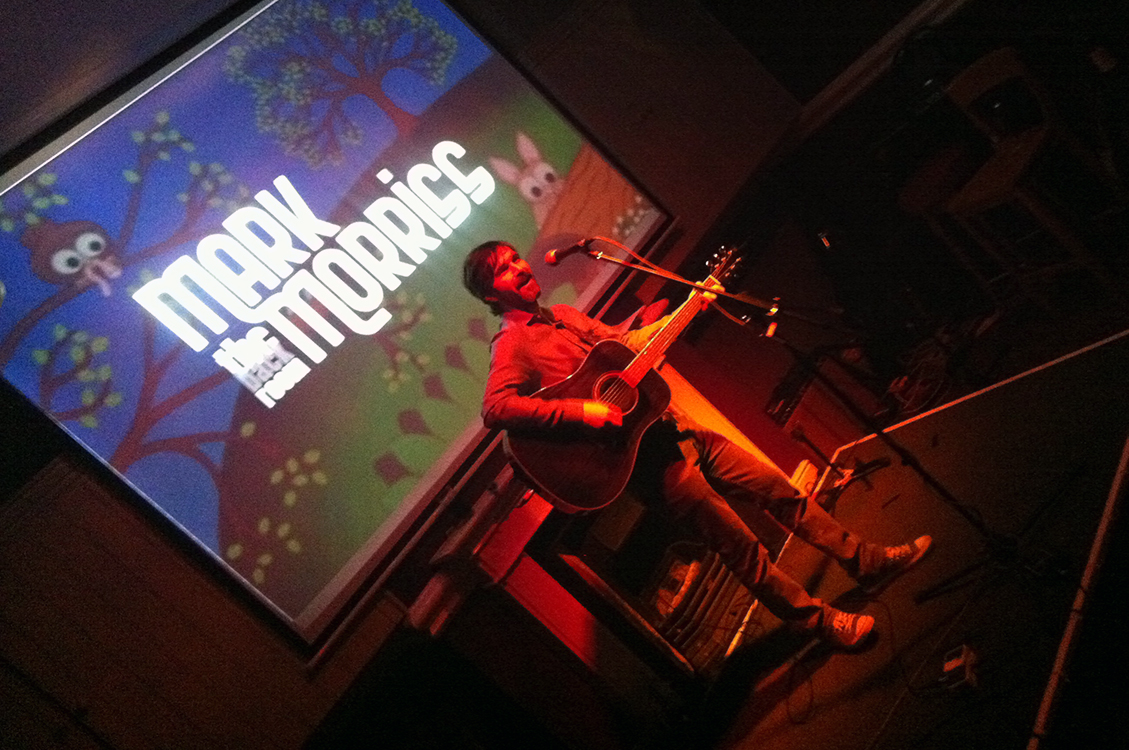 Possibly one of the nicest men in the 90’s music scene last night played a rather intimate set to just 90 people in the back room of a pub in the sleepy Staffordshire market town. Mark Morriss has been at the top of the charts with his old band The Bluetones, scoring hits with the likes of Slight Return, Autophillia, Marblehead Johnson and If…so tonight seems like a very intimate affair.

First support act, Kissin Kippers Fishin Club were an absolute highlight. Having the biggest number of people on the small stage for the night (each act seem to dwindle until Mark arrived solo) saw them spilling on to the venue’s floor. Finding time to do a wonderful cover of Super Furry Animals’ God! Show Me Magic and also get a whole group acapella rendition of the 80’s Cadbury’s Flaek advert into the ending of a song was surely a stroke of genius.

Target by Numbers and Gal & Al were both up next and provided sets of equal measure. Mixes of original material and a couple of covers thrown in for good measure shows that there is a wealth of unsigned talent in the local area.

10pm arrives and Mark Morriss saunters through a talkative crowd and makes his way on stage armed with just an acoustic guitar. The room falls silent as he introduces himself and begins with solo track Consuela and further in to It’s Hard To Be Good All The Time. Morriss have never lost any of his charasmatic charm and is still the elgant frontman he always has been.

Throughout the night he interacts with the crowd perfectly. Telling a few tales from all walks of life, including one of how his Mum used to work in catering at a film studios when he was little. Turning up eating crisps one day and been shown around the set for Duran Duran’s Wild Boys video by Simon Le Bon because he looked bored. He also offers to halt proceedings a couple of times whilst members of the audience nip to the bar as long as they bring him a JD & Coke or a Sambucca.

Back to the music, we get various tracks from recent solo album ‘A Flash of Darkness’ including the single Space Cadet, This Is The Lie (And That’s The Truth) and Sleep Song. We are also treated to what seems to be coming the “Mark Morriss 80’s Request Hour” which sees him cover the likes of Lionel Richie’s Hello, Foreigner’s I Want To Know What Love Is, Duran Duran’s Rio and a rather stunning cover of Barbara Striesand’s Woman In Love.

Completing the set tonight are the rather obligatory Bluetones tracks. Tonight we get Bluetonic, Keep The Homefires Burning, Marblehead Johnson and he closes the show on a version of Sleazy Bed Track. As he begins to walk off stage, there appears to be a genuine moment of shock as he remembers that he forgot to play one song. Returning back and apologising, he introduces the final song by thanking those who voted in the recent BBC 6music Britpop chart to make this the 6th most popular song of that era. Slight Return cues a massive cheer and a huge singalong to finally close tonight’s show as it approaches the 11.30pm mark.

Always an absolute pleasure to catch this man live, he is returning to the same venue next month. Mark makes a note of this and promises us a set of the same songs, with the same humour and tales told in between each song… before adding, but with new songs, new stories and worse jokes. If you’re a fan of music and standup, this gig will be one not to be missed. And for less than £10, it would be rude not to.