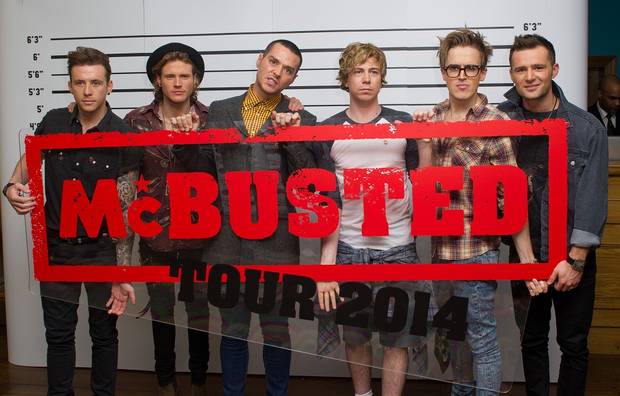 It’s twelve years since Southend trio BUSTED released their debut album. The teen-friendly pop-rockers lasted just two years before rock-at-heart front man Charlie Simpson decided to form Fightstar; his attempt to break into the rock business. With Busted’s high-profile split in January 2005; the reins were handed to McFly to be the pop-rock heartthrobs. A decade on, the band are still relevant; with appearances on Strictly Come Dancing and a trip to the Jungle (I’m A Celebrity…) helping; their music and greatest hits have adapted to keep them in the lime-light.

To mark their tenth birthday; McFly wanted to do something special and take it back to where it all began for them. Whilst Charlie Simpson would not be swayed to reform the boy-band; fellow members James Bourne and Matt Willis took McFly up on the offer to create an ultimate super-group – McBusted; who are embarking a stupidly huge UK tour playing 32 arena shows.

It fell to Young Brando to opening the show with a short; yet impressive twenty minute set. With a styling the rockiness of You Me At Six in their music; with vocals which seemed inspired by The Feeling, the Salisbury five piece stand out track was ‘Out At Sea’. Whilst the space at the front of stage was minimal, the singer was engaging with the crowd and vocally excellent.

Black Country quartet EofE were given the same amount of time to impress. Arriving on stage with a mash-up of Nirvana’s ‘Smells Like Teen Spirit’ and Michael Jackson’s ‘Billy Jean’, the band made an instant impression in the expansive arena. Their own material; which included upcoming single ‘Lust’ didn’t seem out of place in the venue and crowd interaction excellent; with the crowd shining their phone lights on the rock-ballad ‘Kiss Me’.

The final support slot saw three, highly charged American brother; known as The 3 Dudes, take to the stage. The young teenagers; who have teamed up with James from Busted for songwriting played  a very high energy set. The highlight was their finale; a cover of ‘Ballroom Blitz’ which was greeted with a huge cheer from the crowd. The brothers have a lot of potential and given the right material, could make a name for themselves in the UK in a few years.

The high energy continued right from the off as McBusted took to the stage. With a nod to the Back to The Future film, a DeLorean appeared from the ceiling of the LG Arena, only for the two members of Busted to come out of – with a huge bang; (and even louder screams from the crowd) McFly jumped from trap doors in the stage to burst into set opener ‘Air Hostess’.

With so many songs to choose from; the set came down to the most popular 17 tracks from the past twelve years. Mixing well between McFly and Busted material; the early set highlight was ‘You Said No’ and McFly’s debut ‘5 Colours In Her Hair’. The super-group pulled out all the stops with the show; fire-works, flames and high-fives as they walked onto the peninsular past the standing section of the crowd. As the band left the stage after the excellent ‘Sleeping With the Light On’; which saw the crowd shine their lights and sing along as loud as the band, a short video was played which saw the group re-enact a Roswell style UFO incident. To deafening screams; the band re-emerged on top of a huge ‘flying saucer’ at the rear of the venue; to which the band played ‘Star Girl’.

The group spent time thanking the crowd; of which was part of the first dates to go on sale, before rounding up their short set on the stage with A Present For Everyone album closer ‘Nerdy’ and McFly’s ‘Room on the Third Floor’. They sprinted back onto to the main stage for a the remainder of the set. With highlights coming from the Jackson 5 cover of ‘I Want You Back’ – which saw the two Busted member fire t-shirts into the crowd and ‘All About You’ – the Comic Relief single was sung back word for word – with smiles on the faces of the 6 piece super-group. There was only one way to round off the evening; a fully pumped up version of ‘Year 3000’.

It’s rare to see such a diverse audience; many fans of both bands in the early days required a parent to see them – now were there with university friends or younger brothers or sisters. The tour was all about celebrating the past decade of McFly; with help from the band which kick-started their career, McBusted gave the fans exactly what they wanted – this was one reunion which will hopefully be around for a while.