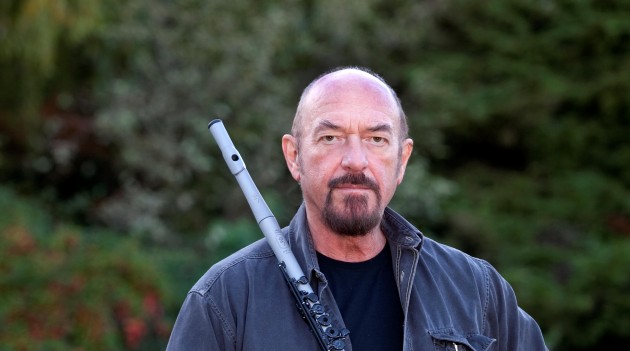 After 46 years (yes forty-six) of standing on one leg and playing the flute to adorning fans you’d think it was time hang up the cod piece. But no, the prog pioneer, blues, folk and rock legend – Jethro Tull’s front man – IAN ANDERSON MBE is far from finished just yet.

Just a little on the history of what makes Ian Anderson a rock legend… Jethro Tull turned down a chance to play at the most famous festival the world has ever seen – 1969’s Woodstock. However, Tull did play at 1970’s Isle of Wight festival alongside the likes of Hendrix and The Who in front of a 600,000 strong crowd. That’s Legend.

Ian and band pulled into Birmingham’s Symphony Hall as part of his UK, European and North American tour in support of the recently released new prog-folk-metal concept album Homo-Erraticus. The first half of the evening’s performance was dedicated to presenting Homo-Erraticas in full. It was clearly evident that the many loyal Tull fans were sympathetically or perhaps appreciably going through the motions of clapping as opposed to applauding as each number segued from one to another.

Homo-Erraticus follows man’s progression through the eyes of Gerald Bostock, the fictitious schoolboy who wrote the poem for Tull’s 1973 concept album Thick as a Brick and subsequent follow up TAAB Pt2.  Anderson starts the show off with the opening track ‘Doggerland’, set in the Neolithic era as England separates from mainland Europe. ‘Heavy Metals’ tells the story of Iron Age man, blacksmiths, ploughs, weaponry and tools. It is noticeable by the evenings second offering that Anderson’s vocal range isn’t what it used to be back in the day when he would have paraded the likes of Heavy Horses and Minstrel in the Gallery. Anderson shared vocals with Ryan O’Donnell (vocals, mime and general stage tomfoolery) – O’Donnell thankfully taking the pressure of the higher notes.

The first set flowed very well as it took the audience through the eras. A giant screen projected animations and video footage which allowed the assembled to follow more easily, music with visual subtitles almost.  ‘Turnpike Inn’ and ‘The Engineer’, the latter following Brunel’s tunnels, tracks and bridges, both stood out as crowd-pleasers of part 1.

Part Two was billed as “The Best of Jethro Tull” and this is what Anderson’s fans; in the majority, had turned out for. A massive date clock was projected on the rear screen and the date rolled back to 1968, time for some ‘Living in the Past’.  The screen flashed images of a long-haired Anderson as his aged counterpart synced his now strained vocals to his younger image – it worked well. One thing is for sure, Anderson hasn’t let his years get the better of  his ability to be the world’s greatest rock flautist and his stage presence. The crowd had come to life.

‘With You There to Help Me’ was by far one of the highlights –  well no, every Tull offering was an highlight – O’Donnell’s younger, more harmonious voice complimented Ian’s perfectly as it did on ‘Teacher’.

‘Sweet Dreams’ raised the tempo as the back screen flashed images from the Slipstream video; Anderson taking on the roles of Dracula and the Aqualung tramp. German born guitarist Florian Opahle powered his way with perfection through the riffs made famous by Birmingham’s own Martin Barre, sadly missed next to Anderson on lead guitar. (No he’s not dead, they’ve just parted ways).

The Best of Jethro Tull set ran through ‘Too Old To Rock and Roll: Too Young To Die’, ‘Songs From the Wood’ and an amazing rendition of ‘Farm on The Freeway’ from the Grammy Award winning Crest of a Knave album. Perhaps the surprise of the evening came with an offering from the concept album A Passion Play, with Anderson remarking how seventies critics commented that he’d gone a bit too far this time.

There were three offerings from the album Aqualung; ’My God’, ‘Aqualung’ itself and ‘Locomotive Breath’. All played to perfection and all received individual standing ovations from the near capacity crowd. Although there were two very different sets played by Anderson and crew, it was plain to see what the crowd were there for.

The best of Jethro Tull lacked ‘Heavy Horses’, ‘Broadsword’, ‘Black Sunday’, ‘New Day’ etc… etc… The problem was that there was more than enough time, given the Symphony Hall’s usual curfew, to include at least another twenty minutes or so of Tull classics. Perhaps some acoustic ditties such as ‘One Brown Mouse’, ‘Moths’, ‘Jack-in-the-Green’, ‘Dun Ringill’, etc… etc…or at least a nice little medley.

A pitiful one song encore, albeit ‘Locomotive Breath’ left the crowd wanting more, but then if they’d have played several encore songs the crowd would have still wanted another. All in all it was a mixed night with a blend of new material and old classics. Anderson proved he was – Too Young To Die.