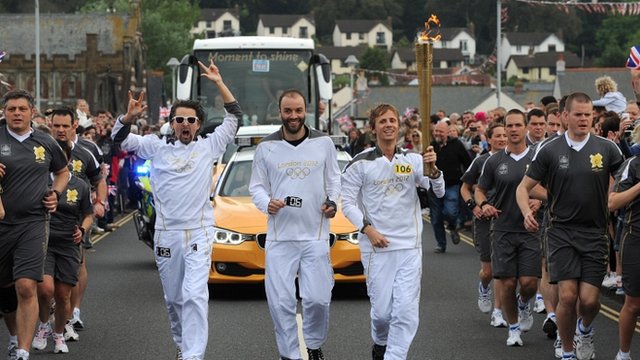 Thousands of people turned out to see Muse carry the Olympic torch in their Devon hometown of Teignmouth. Crowds, which were limited to 7,000 by local police, watched as the trio ran over local landmark Shaldon Bridge into Teignmouth with the torch, on the second day of its 70-day relay. All three members of Muse ran with the torch and they were among 121 people who helped carry the torch from Plymouth to Exeter, reports BBC News.

Muse are currently recording the follow-up to 2009’s ‘The Resistance’ in London. The album is scheduled for release in October 2012 and will be the Devonshire trio’s sixth studio LP.

Little has been revealed about the album so far, but the band have said that they are working on an orchestral score with composer David Campbell, who has previously worked with Radiohead on ’15 Step’ and U2’s Broadway musical ‘Spiderman: Turn Off The Dark’. Muse bassist Chris Wolstenholme has previously said that the band want to do “something radically different” on their new album.