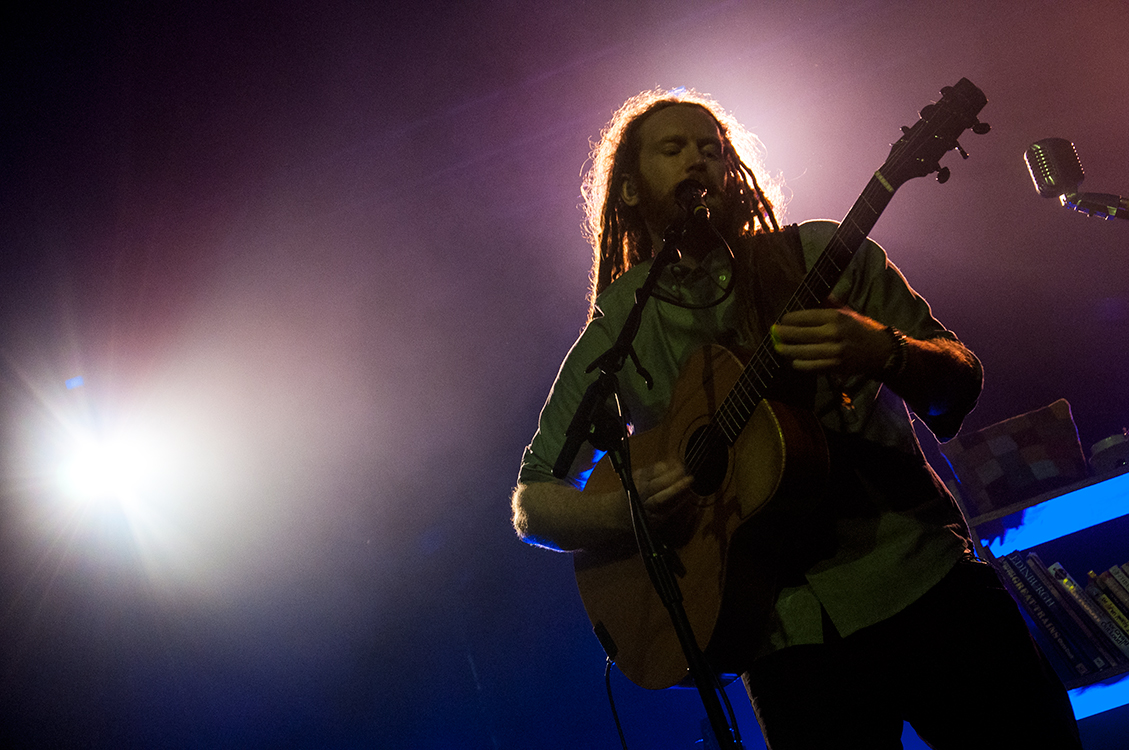 The acoustic troubadour returned to the UK with a full tour last week and rolled into B-Town to a warm reception. Taking to the stage alone bathed under a blue and yellow light, Newton kicked off with the rather catchy Where To Start from current album ‘Studio Zoo’. The night was predominently played solo, occasionally being joined by other musicians who compliemented him on guitar, chello, backing vocals amongst other instruments.

Faulkner always seems to put effort in to creating a “show” for the viewer, whether it be whimsical tales, jokes, snippets of various covers or in tonight’s instance, also making endless cups of tea from a teapot perched upon the bookcase behind him.

Newton may have fallen a little out of the limelight in recent years, but this seems to do him better performance wise. Again, showcasing tracks from his recent album, they fit alongside his back catalogue like firm friends. Losing Ground, Don’t Make Me Go There and Treading Water show off Newton’s guitar skills for which he excelled in to the public eye.  There is a tenderness in his voice that isn’t showcased very often, his love of life and his passion for life are admirable. His story telling is observant and precise. Telling accurate tales of life, we can connect with every tender lyric, every truthful one and every funny ode.

Of the more weathered material in his catalogue, I Took It Out On You is gorgeous, If This Is It stands tall and I Need Something gains one of the biggest cheers of the night. Of course Teardrop raises the roof as Newton performs eloquently, both maximising his strumming and the unique way he plays the guitar body for a beat. This however, isn’t the most interesting cover of the night. He tells us how he is working on something a little different but would like to play for us anyway. Without an introduction, the first notes are played and a few screams are shoulted out as he begins to croon and swing his way through a cover of Justin Timberlake’s Like I Love You to absolute perfection – you would expect nothing less from the guitar maestro.

Other highlights from the set come from Newton’s third album ‘Write It On Your Skin’. Pulling Teeth, Clouds and the rather lovely Soon again cause a mass sing-a-long from the crowd. Highlight of the night though must go to a standout performance of the title track; Write It On Your Skin. If audience participation is a key element, then this was the winner. Carrying most of the song for him, Birmingham are certainly in fine voice tonight. Taking over the “Life is like a music box…” vocals, Newton seems pleased with the interaction. As the song begins to wind down, Newton speaks to the standing segment saying “this might be an acoustic gig, but that doesn’t mean we can’t rock out a little” he then asks us to “bounce like you are at a rock gig” before asking the seated patrons to headbang. With that, the acoustic is switched to an electric effect, everything seems louder and the whole room literally elevates. If anyone caught it on video it was a sight to behold.

The encore begins with a lovely and dreamy version of Dream Catch Me followed by the equally magical If This Is It. Before the final song of the night, Newton joins the font rows for what has become his trademark audience photo. The show then finishes on a stunning rendition of Orange Skies.

Whilst the show may have showcased more of his latest album than some may have expected, the night proved that Newton Faulkner is still a very talented musician and songwriter. The night was filled with humour, love and perfect vocals, not to mention the guitar skills. He is slowly making himself in to a national treasure and will surely be around and entertaining people for a very long time yet.