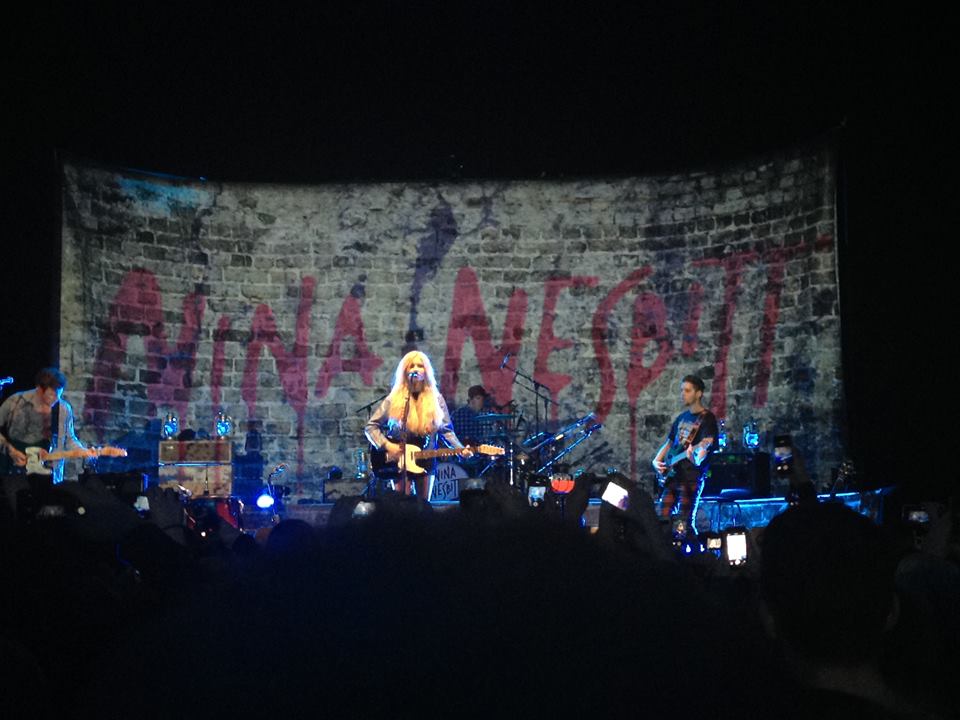 Last night, the walls of the Usher Hall main stage were draped with luxurious white linen and the stage was widened to its fullest extent for the soulful diva singer that shook the stage. This time, the stage has been reworked to echo a punk-rock welcome home to Edinburgh’s own Nina Nesbitt.

The plush red velvet seats have been removed from the main floor, and the crowd stands reaching toward the stage which is framed now by black curtains. Olivia Sebastianelli is first to open for Nesbitt with a sultry, gravelly, acoustic rock edge. After Olivia, James Bay struts onto the stage with his trademark brown hat and a red electric Epiphone guitar. His recorded music is softer sounding folk, but his performance is highly energetic rocking blues.

After Bay’s half hour opening set, the audience begins to get fidgety, singing along with the intermission music and forming a chorus for songs like ‘Chocolate’ by The 1975 and ‘Pompeii’ by Bastille. At five past nine the lights dim and the sound of spray paint bleeds through the speakers as a projector scrawls the name “Nina Nesbitt” on backdrop. Nina appears moments later, and the band goes straight into her debut albums eponymous track; Peroxide. For most of the night Nesbitt swaps between her acoustic and electric guitar, taking moments in between to play piano ballads and pound on the occasional floor tom.

“This is certainly an improvement to playing to like five people at Electric Circus two and a half years ago,” Nina laughs. While Nesbitt’s recorded music often hops back and forth between folk and pop, tonight she channels her inner rock goddess, especially during ’18 Candles,’ when she echoes a Stevie Nicks atmosphere. For ‘Bright Blue Eyes,’ her backing band leaves the stage and Nesbitt sits beneath a keyboard for an intimate piano version of the song. A blue light silhouettes her and diffuses through her hallmark white-blonde hair. What the audience lacks in maturity they make up for in enthusiasm, waving and clapping along to every song.

A red light stretches across the bottom of the stage for ‘Tough Love,’ illuminating the inner angst and bitterness of the lyrics, before a rock-fuelled guitar-solo jam session. Earlier in the day, Nina asked her Twitter followers to give them a little information about themselves so that she could write a custom verse for ‘We’ll Be Back for More.’ She dedicated the song to anyone there with their friends that night, and during the special verse eight friends joined her on stage to sing.

After mentioning The Hive, a local nightclub legendary among Edinburgh’s younger crowd, and later her previous job at St James’ Centre as inspiration for ‘Way in the World,’ she shows her appreciation to playing a show in her hometown. “It’s good that we’re all in Edinburgh so we can all understand.”

After an intimate performance of ‘The Hardest Part’ lit by swaying lighters and iPhone flash lights she leaves the stage and thus the chant “one more tune” builds to a chorus.  Nina and the band fill the stage once again for three more songs and a cover. Of course, the best way to end a hometown show in a Scottish city is to sing the unofficial anthem of Scotland; ‘500 Miles’ by The Proclaimers. The chorus booms with a call and response from the audience, and Nesbitt jumps off the stage to greet her fans during the instrumental break. 500 miles or not, there’s no place like home.