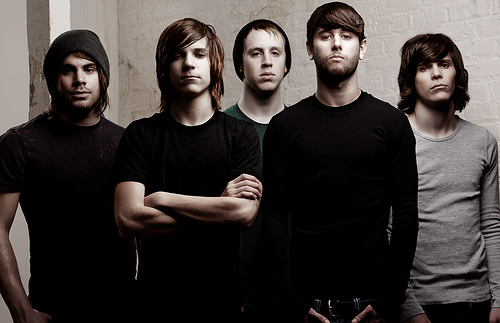 On 6th February 2014, Camden Underworld played host to an incredible array of talent. Headlined by American four-piece OUR LAST NIGHT, and with support coming from Secrets, Empires Fade and High Hopes, the world famous venue was filled to the brim with high quality, melodic breakdowns, fast-paced drum blasts and bass “intense enough to make your ribs want to cave in” (George, 22, Clapham).

Underworld has never hosted so much testosterone on one small stage. Empires Fade frontman – Jack Delany – was covered head-to-toe in ink and wearing a nice, cheerful Bleed From Within vest. You’d be surprised how well spoken he is for a guy that expresses so much violence and anger on stage. He makes bloody good music, too. And he certainly knows how to get a crowd going. Watching him raise a microphone above his upward-facing head, dropping it from height and screaming into it at the exact moment he catches it – with bass and drum breakdowns and fills going on all around him – was definitely a high point. At one point, Delany even got reprimanded by the venue security for pulling someone on stage and prompted him to go crowd surfing around Underworld. Apparently that’s not acceptable there: take note.

Just before the Californian 5-piece Secrets – who’ve just come off toured with Sleeping with Sirens – entered the stage, guitarist Michael Sherman tweaked his handlebar moustache. “It’s all about the final preparations”, he joked. Sporting an Empires Fade merch tee, he was ready to rock. And Secrets did just that. Every member of the band just looked so incredibly happy to be there and, alongside the seemingly choreographed ‘dance routine’, it made for a truly euphoric spectacle.

Apparently – a strange ritual, maybe – when it is time for Our Last Night to play, it’s time to light the incense. Strange, yes; but the place smelt incredible.

For those who don’t know, here’s some advice: when involved in a moshpit as intense as the one during Our Last Night’s opening track (Same Old War), take care. The concrete pillars that hold up Underworld’s high ceilings do not combine well with your head and/or limbs. You live, you learn. Bloody excellent crowd though! You were surrounding by so many loving fans, unified through incredible riffs and pair of highly talented brothers – Matt and Trevor Wentworth.

Song highlights including Across the Ocean – which has come a long way since they supported We Are The Ocean at Kings’ College London Student Union back in October 2010 – and a cover of Adele’s ‘Skyfall’, which again encouraged huge moshpits. Also, a new single entitled ‘Sunrise’ was truly spectacular; It seemed that the level of emotion in the room was incredibly heightened during this track.

Frontman Trevor Wentworth had this to say: “This has been one of the most emotional and energetic shows we’ve ever headlined, and it is one that we’ll never forget.”