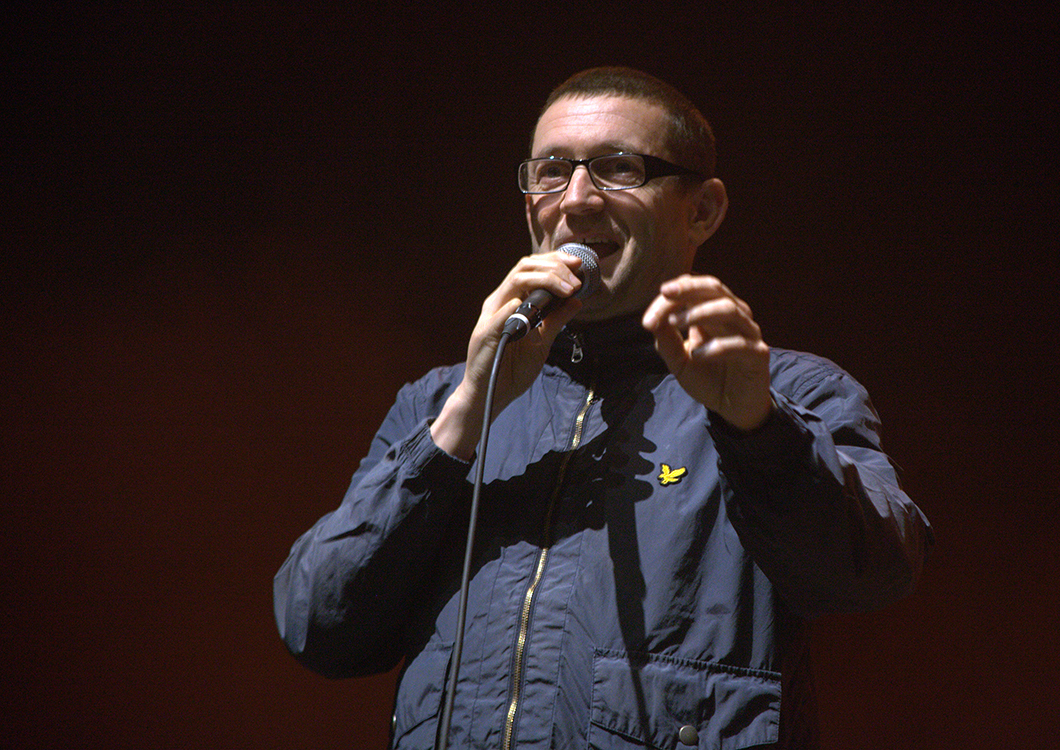 It was great to see Paul Heaton, described recently as popular music’s Mike Leigh, enjoying himself again after his self-confessed ‘split with himself’ as a solo artist and reunion with Beautiful South mate Jacqui Abbott. A sell-out Birmingham Institute crowd bonded with Hull’s famous son right from the moment he stepped on stage with his new vigour and engaged in his first set of quips.

In just under 90 minutes and 20 songs, the 28 years since Paul Heaton’s first album with The Housemartins flashed by. His traditionally wry observations about romance and the state of the nation were all gleefully accepted by the mature audience in a seamlessly married set of 5 Housemartins numbers, 8 Beautiful South classics and 7 well received tracks from the excellent new album with Jacqui Abbott, ‘What Have We Become’.

In studious spectacles and tightly zipped bomber jacket throughout, Heaton encouraged those who hadn’t bought the new album yet to go and do so; as it would buy the band more booze. He did nothing to dissuade us he’d return the favour and buy his fans a pint if they dropped into his local. You’d get a few cool stories and Heaton would be a far better drinking partner with his warm socialist principles and support for the GMB trade union than questionable current ‘man of the people’ UKIP’s Mr Farage.

Note perfect throughout, Heaton and Abbott and the band happily worked their way through ‘Some Dancing To Do’, ‘Old Red Eyes Is Back’, ‘Costa Del Sombre’, ‘Rotterdam (Or Anywhere)’, ‘Prettiest Eyes’ and ‘Moulding Of A Fool’.

Before the track ‘We’re Not Deep’ came the Housemartins’ ‘History lesson’, i.e. how they’d won a local Battle of the Bands, £200 spent on promo cassettes and a support slot for a major star of the time… only to find out the support was ‘soon to be exposed’ Gary Glitter.

Bonding more firmly with the people from the city of ‘sewers’ (nay canals) by declaring himself similarly scruffy and smelly but charming and lovely, after performing ‘The Snowman’, ‘Build’ and ‘When It Was Ours’, Heaton took a song’s rest, giving Abbott control of the stage for a stirring ‘Dream A Little Dream Of Me’.

Further rejuvenated by his break and with further confidence from the crowd’s increased welcome, Heaton whipped his harmonica out for ‘Don’t Marry Her’, launched ‘The Right In Me’ for the first time live and manfully did the Heaton strut during ‘Good As Gold’. The crowd’s roar was furthered by catchy current single ‘DIY’ and set closing ‘Happy Hour’.

With Jacqui taking selfies at the start of both encores and glancing more than a few times to the side of the stage with a beaming smile at friends or family, the evening, unlike the heartache in many of the songs, was very much a celebration of the reunion.

The first encore delivered ‘I’ll Sail This Ship Alone’ and ‘Me and The Farmer’ and when Jacqui’s opening for the final encore was ‘Loving Arms’, her audition song for Beautiful South at the age of 17, you felt this tour was a new audition and new journey. The flawless acapella of The Housemartins’, Isley Brothers cover ‘Caravan of Love’ was as convincing a call for freedom as ever before. If the world didn’t listen to Heaton back in the late 80s, they should surely do so now. He’s back and will charm his way into your heart again if you let him.