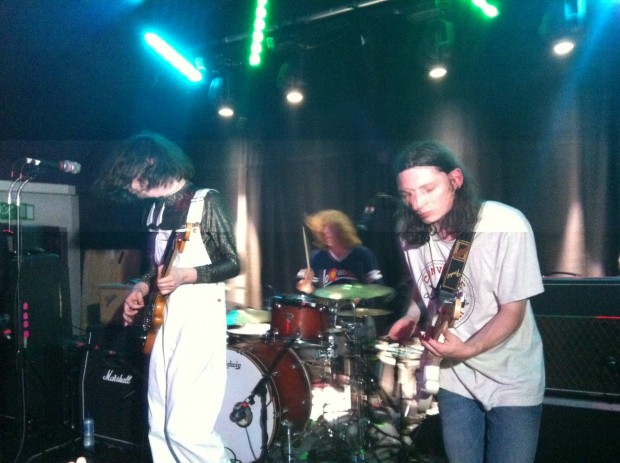 In the height of the summer months, Glastonbury Festival only a few days away, it seems fitting the Birmingham’s current biggest export on the music scene should have announced an entirely intimate gig in their home town as a warm up for the festivals. There was nothing fancy tonight, no pyrotechnics, no support act, not even fancy lighting. It was all about the music, and that’s how it should be.

From the second the band played the opening notes of ‘Follow Baby’, the audience were off on one. The mosh pit started, swaying left to right and crowd surfers coming from all angles. ‘Wraith’ followed next and with it came a huge cheer from the already sweaty audience. Frontman Harry dressed in a pair of white dungarees over a shiny golden glittery top seemed spurred on by the reaction being given from the attendees.

Another highlight was the swell in the crowd and singalong as ‘Bloodshake’ took off. The roof was literally shaking through the sheer force exuding from the gathered in the Temple. Effortly seguing into ‘Toxic’, full respect must be given to guitarist Dougie for playing intensely into the front rows of the animalistic crowd. The rhythm secion of Sam and Dominic really helped to propell the band into the faces of the fans.

‘1998 (Delicious)’, ‘California Daze’ and the epic ‘Lovesick’ brought the ‘Glastonbury set’ to a close. To say the audience were left wanting more was an understatement, but the band returned for an encore. Kicking off with ‘Scumbag’, it becomes clear to see obscure comparisons to the early Libertines gigs. Crowds in hysteria, singing along to every word, still moshing like there is no tomorrow, it’s fab to see. Next comes the cover they did for Radio 1’s Live Lounge of Disclosure’s ‘White Noise’. Somehow this shouldn’t really work, but ends up being an incredible highlight. Even merging elements of Pink Floyd’s ‘Another Brick In The Wall’ just makes it even more special.

The band then pull out ‘Higher Than The Sun’ as the final closer. Once again the crowd joining in and calling out for more once it drops to an end. The band seem incredibly humbled by the reaction. I’m sure the festivals will do them proud and by the time of the homecoming christmas gig at the o2 Academy in December, I think we will see an even more rejuvinated band on display.