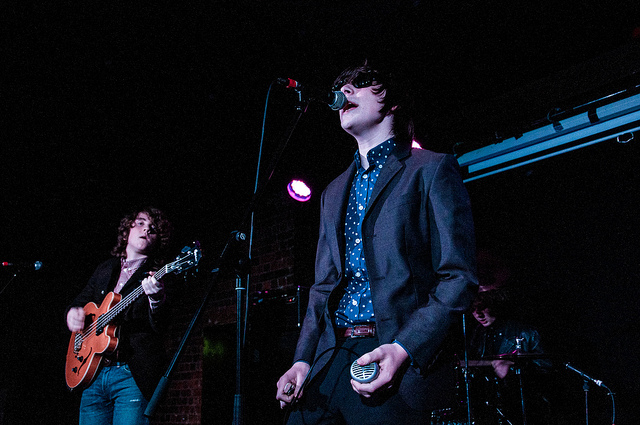 Believe the hype! This band are incredible, seriously, seriously incredible! I do not think at the moment that any form of review will do this band justice if I am honest. But wow, if you were not there last night, or do not have a ticket for one of the upcoming dates over the summer, I am afraid that you have missed out big time! Remember the fact that this band are only teenagers, not even out of school yet. Yet to blast out 18 tracks of bluesy rock n’ roll in under an hour with barely an ounce of sweat on them is unbelievable.

On the same day they played here in Wolves, we find out that they’ve just been announced as the support act on the Arctic Monkeys‘ arena tour. If you can get along to those shows I urge you to do everything possible to get there early to catch these teenagers, you really will not believe what you witness.

Arriving on stage like suited young gentlemen, Josh McClorey also resembling a young Bobby Gillespie mixed with Liam Gallagher’s swagger approaches the mic and launches into a throaty vocal of opener ‘Mystery Man’. The voice is like that of someone twice his age, he has the presence that the front rows are bathing in. Lead guitarist Conor Bates is incredible. Riffing the blues like it’s as easy as saying the alphabet, this is one talented lad. Taking over lead vocal duties for second track ‘She’s So Fine’ he also proves that should it be required, he could carry the band too. Throughout the set you see these two share vocals and it becomes apparent that not only do they mix the classic Beatles/Stones/Animals vibe, they also hold elements of The Libertines in their playing style.

Rhythm section of Pete O’Hanlon and Evan Walsh on Bass and Drums respectively are just as, if not tighter than the frontmen. They pull the tracks together, but as a band unit, they are lively, full of energy, passionate and just incredibly talented. Throwing in a few covers into the set is easy, they made their name by doing Beatles covers back in Cavan, but tonight we get the likes of Bo Diddley’s ‘You Can’t Judge A Book By The Cover’, Jessie Hill’s ‘Ooh Poo Pah Doo’ and Muddy Waters’ ‘Rollin’ & Tumblin’. All played like old favourites, confidently and with so much vigour.

The whole gig is incredible, the audience seem to gel into one and all recognise that this could be one of those ‘I was there then’ moments. There is hardly any chitter-chatter which has become standard at so many shows, instead there is singing along, dancing and people just taking in what a talented lot they are. Other highlights from the set include: ‘What The People Don’t See’, ‘Perfect Storm’, ‘CC Rider’ and the singles ‘Blue Collar Jane’ and ‘Hometown Girls’. An impromptu encore, a cover of Bobby Troup’s ‘(Get Your Kicks On) Route 66’ signals the end of a super fast hour of entertainment and certainly leaves the crowd wanting more.

Their debut album due later this year will be one to watch out for and I believe it could be a contender for one of the most anticipated in a long time, let alone one of the fastest selling. These kids have a VERY promising future ahead of them. Seriously, check them out.