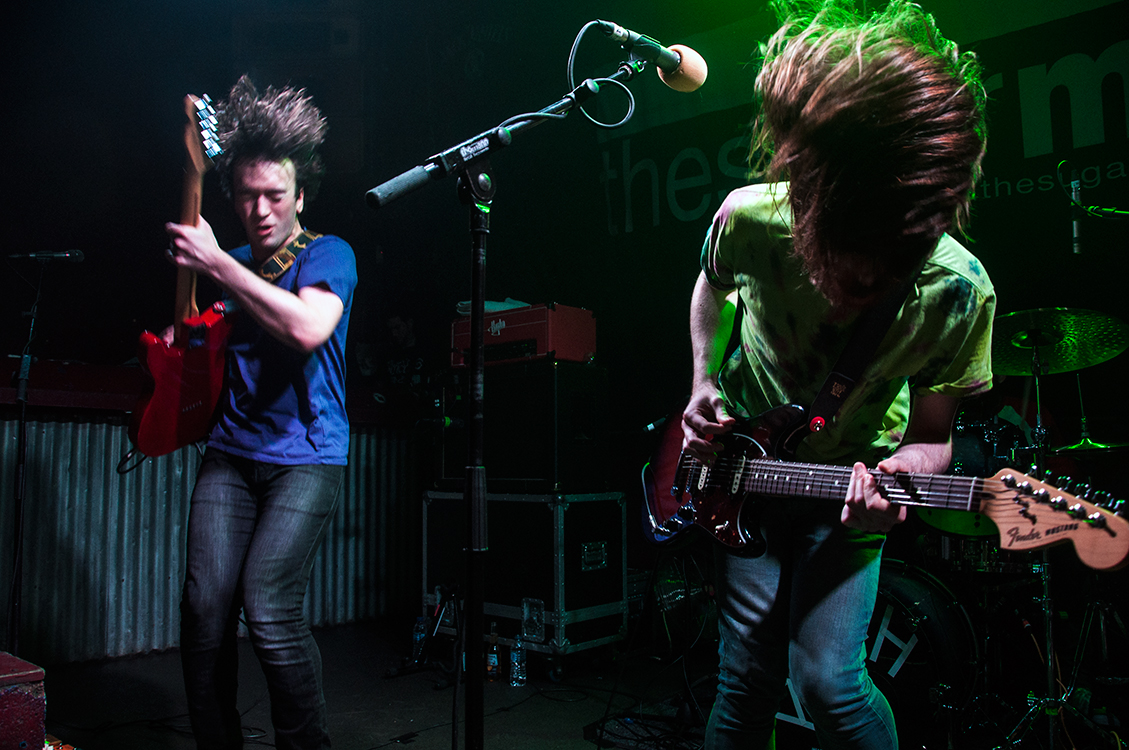 What better way is there to end the week and the start of a bank holiday weekend than standing in a room full of long haired, sweaty young people and being thrown in every direction possible? Well, some would argue plenty, but tonight, this is eactly what is called for.

Pulled Apart By Horses are back with their first full-scale UK tour in nearly two years and half way through, are playing an intimate club date in Stoke. “Last time we were here, our merch man threw up in a pint glass, walked upstairs and got off with some bird” chuckles guitarist Jamie half way through the set. Inspiring times indeed for the young 4-piece from Leeds. Support tonight comes from The Wytches. Although phenomenal musicians, the only thing that lacks is a little interaction with the audience. Maybe it was nerves or just the PA, but when frontman Kris addresss the crowd he is inaudiable. When it came to playing, screaming and singing however, you could not fault the youngsters one iota.

Pulled Apart By Horses took to the stage with vigour just after the lights went down, after letting a few moments of surreal and spookily sounding horses over the PA, the rockers launch into a frantic ‘E=MC Hammer’. Even if the staff at the venue had been prepared, they surely could not have envisage the sights of the next hour. As soon as the song started, there was a mosh/circle pit that consumed the majority of the floor between the sound desk and the stage. There were crowd surfers and fights that security had to break up more than once. Another early highlight was an arms-in-the-air/mosh-your-heart-out/singalong of ‘I Punched A Lion In The Throat’.

Showcased tonight were some tracks from the forthcoming new album due to drop late summer/early Autumn time. ‘Hot Squash’ and ‘Degeneration Game’ showed that although musically, nothing much has changed, structurally there is a lot of difference. The rest the band imposed on themselves has paid off and the new material sounds strong, fraught and mature whilst keeping that raw, loud, rough edge to it. ‘Grim Deal’ could easily be the lead single as it seemed to fit the hybrid between last album Tough Love and this newer material.

Older tracks ‘High Five, Swan Dive Nose Dive’, ‘Some Mothers’ and ‘PWR’ sounded as epic as ever. Cruching guitars, thunderous bass and no one standing still on stage. Throughout the set both Tom Hudson (vocals and guitar) and James Brown both escalated the mini risers at the front of the stage to jump off again and again, much to the delight of the audience. ‘High Five, Swan Dive, Nose Dive’ saw frontman Tom run down in to the crowd with his guitar, centred himself in the mosh-pit and proceeded to play an epic solo before running back on stage to finish the song. This led in to a bass heavy rendition of The Stooges ‘I Wanna Be Your Dog’. A song some have made a mess of in the past, yet tonight seems fitting and almost becomes their own.

The final song of the set is handed over to the incredible ‘Den Horn’. Played with velocity, amps turned up, it enticed the crowd to have one last mega mosh pit going. The solo again sees Tom jump down in to the crowd, yet this time he transverses the bar, crawling across it’s length and back before signalling to the band on stage to end it, as they do, he jumps forward and crowd surfs back to the stage. An absolutely sweaty and impressive gig. Roll on the new album and subsequent tour as we need more rock n’ roll.