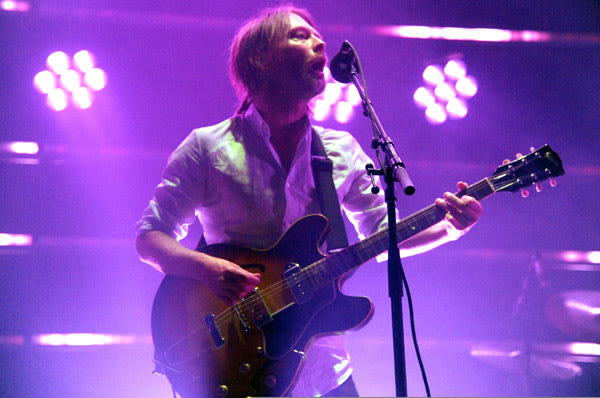 Radiohead debuted two new songs during the first show of their 2012 world tour in Miami last night (27th February). The band, who will be touring throughout 2012 in support of their new album ‘The King Of Limbs’, kicked off the tour at Miami’s American Airlines arena and played new tracks ‘Identikit’ and ‘Cut A Hole’ as part of their set. You can see live footage of both tracks by scrolling down to the bottom of the page and clicking.

The tracks were part of a 24-song setlist that drew heavily from ‘The King Of Limbs’. It also featured the little aired ‘Meeting In The Aisle’ from the band’s ‘Airbag/How Am I Driving EP’, reports Consequence Of Sound. The band have also booked assorted European shows and festival appearances throughout the summer, including slots at Coachella Valley Music and Arts Festival, Fuji Rock Festival and Bilbao BBK Live festival.

The band are expected to confirm UK dates in the coming weeks, but are yet to say when this will be. Guitarist Ed O’Brien has previously hinted that the band will play arena shows in the UK rather than festival dates.

Bloom
The Daily Mail
Magpie
Staircase
National Anthem
Meeting in the Aisle
Kid A
The Gloaming
Codex
You and Whose Army?
Nude
Identikit
Lotus Flower
There There
Feral
Idioteque
Separator
– – – – – –
Airbag
Bodysnatchers
Cut A Hole
Arpeggi
Give Up the Ghost
Reckoner
– – – – – –
Karma Police