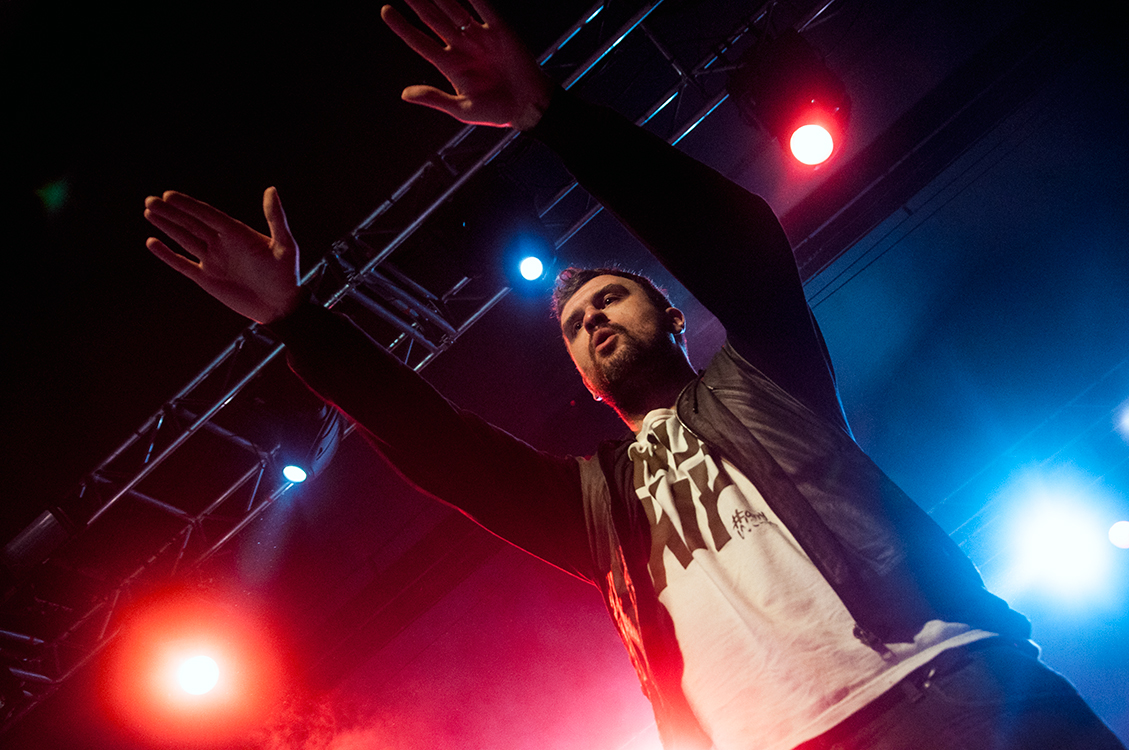 Within seconds of stepping on to the stage, Jon Mclure aka The Rev is urging the audience of the Academy to “bounce”. One thing you are guaranteed at a Reverend and the Makers concert is that you will move. When you open with the dancable duo of ‘Detonator’ followed by the equally awesome ‘Bassline’, how on earth can you not let go and enjoy yourself?

Touring the UK in support of new album (released this week) Thirty Two, The Rev is on course for his second top 10 album and is steering his way through manufactured pop to lead a one man revolution in the fight to bring back proper music. They are even selling signed copies of the new album on the merchandise stall, complete with a link up so that every copy sold goes towards the chart position… all for a crimially cheap £4.

One thing Mclure does not lack in at all is confidence. Tonight he is the exuberent and enigmatic frontman. Encouraging everyone to have a good time and bounce along. Reminding people that live music is an experience that many miss out on, yet those here tonight will go forth and tell tales of a great band and a great night out.

Of the 18 songs in tonight’s setlist, each and every one is a highlight. The old songs lead way to the perfectly crafted new songs. Tracks like ‘Devil’s Radio’, ‘Play Me’ and ‘The Only One’ sound as if they have been in the set for years, given the way the audience join in and sing the lyrics back to the band. Jon Mclure’s bandmate and now wife Laura McClure (on keyboards) joins him on dual vocal duties throughout the set, but it is musicians Ed Cosens, Joe Carnall and Ryan Jenkinson who add further fuel to the fire.

Naturally, the older tracks in the set prove as a catalyst for excitement in the crowd. A few times McClure has to address the fact that there are circle pits, stating endlessly that “they are not cool” and “they frighten the girls, they won’t come again!” before finally declaring “it’s an American thing to run in circles, let’s be British and bounce!”

‘Open Your Window’, ‘What The Milkman Saw’ and ‘He Said He Loved Me’ cause a great deal of partying and bouncing from all across the crowd. The latter manages to break The Rev from his encouraging stage persona, stepping back and grinning at the sight before him. ‘The Wrestler’ proves another highlight, while the delicate ‘Hard Time For Dreamers’ sees Mclure take on acoustic guitar duties, guiding the mass audience in a huge choral singalong.

Some of the bigger cheers are of course reserved for ‘Heavyweight Champion of The World’ and the set closer ‘Silence Is Talking’, the latter having the entire audience ensemble sing back Laura’s trumpet parts to the point that she can barely be heard. As the song finishes, The Rev picks up and acoustic guitar, jumps down into the crowd and leads everyone outside the venue and those willing gather a few hundred meters away. Making sure not to let anyone feel alone tonight, Jon befriends a homeless man and urges everyone around to donate what they can. We are then treated to an impromptu version of ‘Happy Birthday’ for a fan, followed by an acoustic ‘Miss Brown’ and ending on a high with a wonderful mass sing-along of The Specials’ ‘A Message To Rudi’. With the song fading out, Mclure bids us goodnight, fights his way through the crowd and runs off back to the venue ahead of the fans.

Reverend and The Makers live is both an experience and a party. The fight for live music has a leader; we must follow the Reverend in his quest and make sure this does not become a dying art.