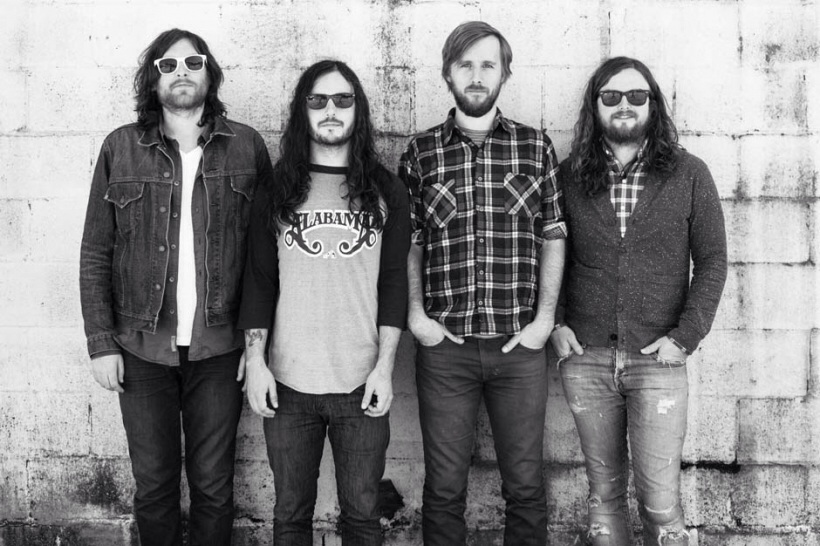 First up were Oxford-based Wild Swim, who played an excellent variety of funky, synth-driven bluesy rock. It soon became clear that they were a very carefully chosen support act as their soulful sound eased the audience into an evening of fast-paced rock ‘n’ roll. With a sound that was very mature for their young age, the five-piece played a set of 6 tracks that were very warmly received.

Especially enjoyed was the second track – entitled ‘Solace’ – which featured soulful vocal scores entwined with upbeat rocky riffs and fragmented synth lines. It was very hard to pin them down to a single influence in their sound.

With elements of early Franz Ferdinand being fused with the soulful refrains of Ed Sheeran and an experimental collection of riffs and vocalist Richard Sansom producing very emotional lyrics throughout, Wild Swim were pretty damn original. It was really refreshing to hear a young band trying something that hasn’t been done before.

When J Roddy Walston & The Business came to the stage, the venue filled with raucous applause (and the distinct feeling of emasculation… How are those beards so damn good?!).

The moment Walston began to sing the show was well and truly on. If Jack Black’s ‘School of Rock’ were a real thing, these lads would’ve graduated top of the class: World-class head-banging rock ‘n’ roll.

Key tracks included ‘Full Growing Man’ which was opened with the remark: “I hope you guys are all gonna get a little sweaty, move around… Touch each other… That’s what we’re looking for tonight”. Windmilling as he played his trademark upright Yamaha and surrounded by high pitched, technically challenging screaming from ‘The Business’, J. Roddy Walston presented ‘Full Grown Man’ as quite the opener.

Shortly after this, we heard the ever-annoying sound of a technical issue: “My piano has gone dead… Anyone got any ideas for me?” Soon though, to the satisfaction of both audience and band, all issues were resolved and, luckily, remained resolved for the entirety of the set.

Later in the set, ‘Heavy Bells’ – a track that features as the lead single of their forthcoming album – saw The Borderline fill with up-tempo energy, even prompting a small set of moshpits down the front of the crowd. The sheer amount appreciation throughout J. Roddy’s set was truly surreal. Walston kept thanking his grateful audience: “London, tonight, is the best UK show we’ve played so far… Thank you all for making it so special.” Later in the show, just before teaching his eager crowd some of the incredibly performed ‘Midnight Cry’, he even went so far as to pass a bottle of Jim Beam bourbon around the crowd: “just don’t get too drunk”, he said. “I’ll get in trouble if I get you all drunk.”

‘Caroline’ provided yet another example of why Walston got such a great turnout. Featuring simple riffs and stripped back vocals, the song showcased a different, more innocent side to the bearded group. There was obviously a great deal of emotion behind the lyrics, with slight voice cracks lacing the vocal score. These cracks did not detract from the performance, I must add: they added an air of emotion to the track that was just so genuine. Combine these emotional vocals with the complex, high-reaching guitar solos and up-tempo drum fills and you witness a masterpiece with an ending so abrupt, the track leaves you standing there contemplating the serenity of what you just heard.

Then it all turned dancy. “I’m Going Out”, laced with expletives, prompted an entire audience to jump around to J. Roddy’s own brand of up-tempo folk rock, intertwined with bluesy riffs. It really went to show just how diversely talented these guys are. It seems as though you could give them anything – any genre – and they’d play it to absolute perfection: I have nothing but praise for this hairy foursome.

The inevitable encore that followed featured only two – very well chosen – tracks: an older one in the form of ‘Shaky Hands’ and one from the new album: ‘Marigold’. This particular track was one that I’d eagerly awaited to hear played live. I wanted to know if J. Roddy Walston & The Business could do justice to such a great track in a live situation: Good news, ladies and gentlemen. They definitely succeeded.

This one encore track summed up the evening perfectly. Both Wild Swim and J. Roddy Walston & The Business presented a huge amount of contrast in style. They’re both incredibly diverse artists and two genuinely lovely groups of blokes. J. Roddy & co played their way through slight technical and sound issues without too much stress and, at the end of the evening, nobody really wanted to leave. It could’ve gone on for all of eternity and nobody would have complained. Perfection. What a show.