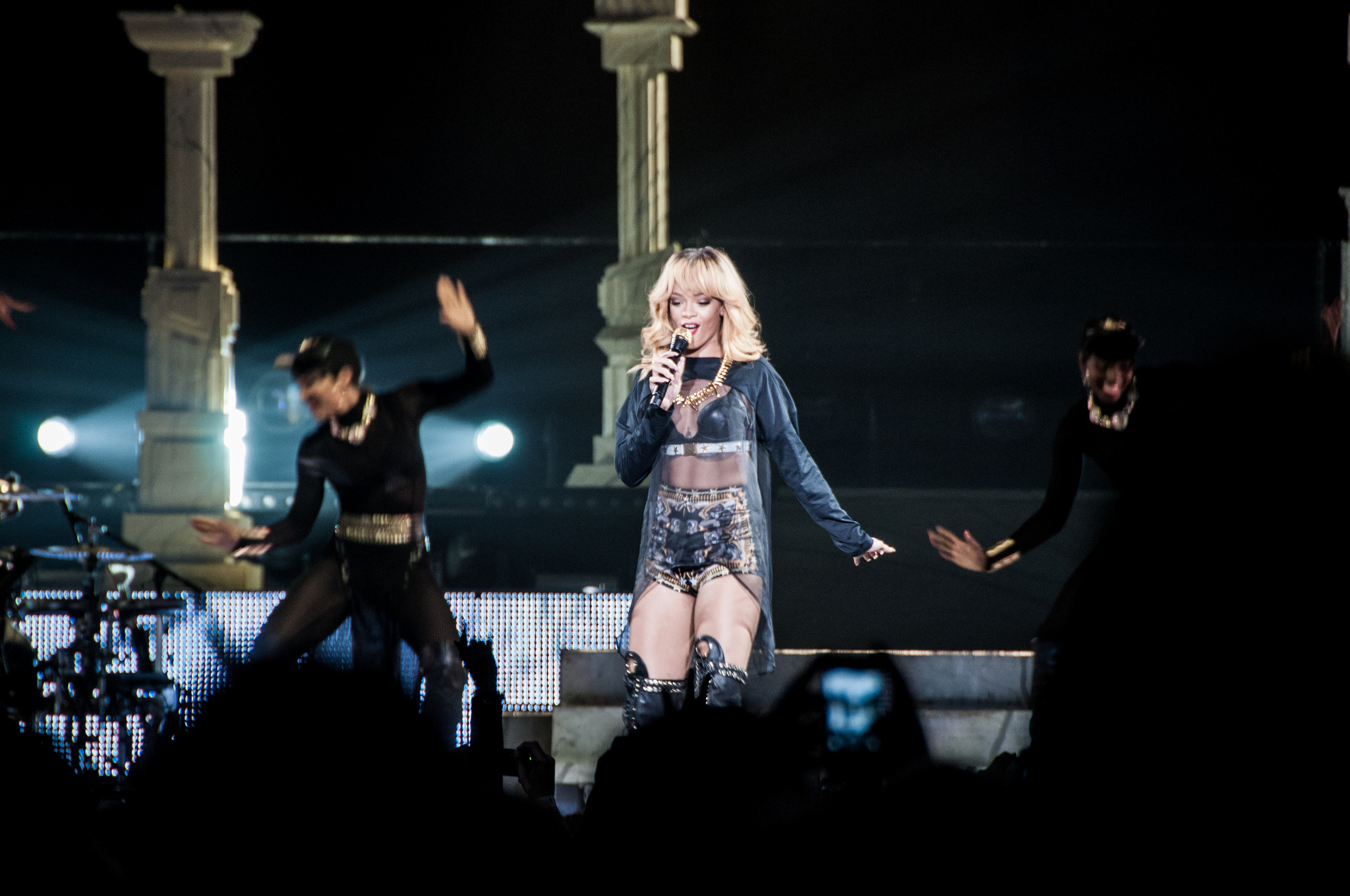 Tonight was one of the hottest nights of the year so far, and Rihanna certianly put on a show to match the temperatures. Arriving on stage behind a giant black curtain, it opened up to reveal the sultry singer encased in a black cape was barely auidable above the screams from the crowd. Opening with the rather subdued ‘Mother Mary’ allowed us to hear her softer side once the audience and sound issues were resolved. Just her visible on stage made for an interesting opening track. As she turned and walked away, the lights faded and she was gone. A few flashes later and the whole band ensemble minus ‘Riri’. ‘Phresh Out The Runway’ kicks up and Rihanna reappears in more usual stage clothing of hot pants, a small top and knee high boots.

Throughout the entire show she flirts with the audience proving what a seductress she actually is. Emphasis however is on the singer’s vocals. The show isn’t half as ‘raunchy’ as I had envisaged from people’s comments of previous tours. The costume changes seem rather reserved, a slinky red full length dress, a shiny ensemble for the encore and only one point where she’s almost in underwear.

‘Birthday Cake’ whips the crowd up into a party frenzy. Followed by ‘Cockiness (Love It)’, ‘Numb’ and ‘You Da One’ Rihanna is certainly on form. There is a huge reaction for ‘Rude Boy’ which gets a feverent singalong from the ecstatic crowd. Her duet with Drake is up next ‘What’s My Name?’ (Minus Drake of course) cue’s another singalong followed by a brief moment of shine for the guitarist as she disappears off stage for a costume change.

‘Umbrella’ is our cue to join in properly with her as she parades the stage asking for the front rows to sing into her mic. Throwing in a cover of Kayne West’s ‘All of The Lights’ confuses a few but slots into her set nicely like an old friend. There is no stopping her now, she’s in full flow and the crowd are fully enjoying it. Next comes the ‘slowed down/romantic’ section with the singer dressed in the afore mentioned red dress. Stood perfectly still in the centre of a revolving stage of lights, she belts out ‘Loveeeeeee Song’ and her Ne-yo duet ‘Hate That I Love You’ with such soul you almost forget her flirty side.

One of the biggest cheers comes next for the classic ‘We Found Love’ which really intensifies the atmosphere and gets the near sold-out arena bouncing throughout. The temperature is set to rise again as she makes her way off stage, down some steps at the front and adorns her public with hugs and hello’s. She asks if it’s time to “get naughty”. In the pit she strips off down to a more revealing outfit, climbs back up the stairs and launches into the rather kinky themed ‘S&M’. With lyrics including ‘sticks and stones may break my bones but chains and whips excite me’, you get the impression that Riri is certainly not shy.

The encore is made up of ‘Stay’ and finishing with the recent smash ‘Diamonds’, she thanks us for coming out tonight and making it a hot night for her. The atmosphere by this point is boiling in the crowd and it is certainly no less cooler outside as we all file out. Well done Rihanna, that was quite simply ‘electric’.