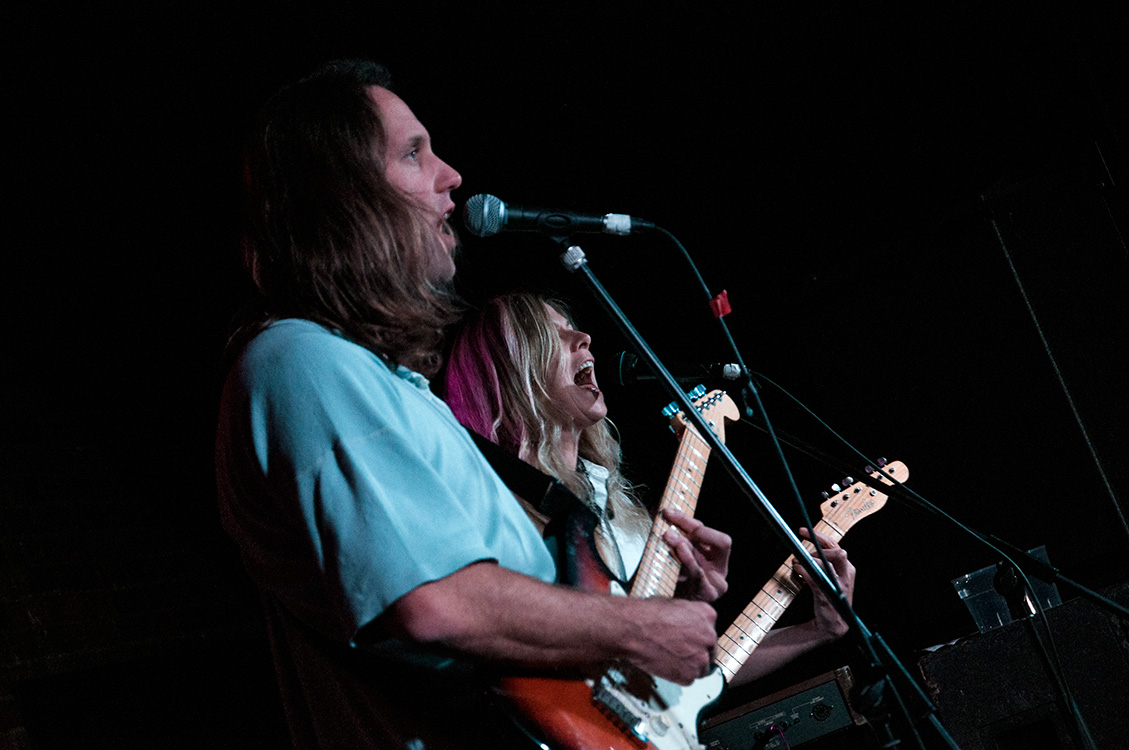 For those not familiar with messrs Stringer and Bessant, they are Gary Stringer and Jack Bessant, singer and bass player in 90’s surf-rock band Reef. Tonight they brought their lovable acoustic format of StringerBessant back to the Slade Rooms almost 2 years after their last show here. Tonight however, is much different in format. Instead of the acoustic duo, they are back with a full band and a second album. Having now drafted in fellow Reef sticksman and tv advert superstar Dominic Greensmith alongside fellow West Country singer songwriter Amy Newton on guitars and vocals, the band arrive on stage appearing confident and very relaxed.

Kicking off proceedings with the elegant ‘Alison’, the band sound very loose and completely at ease with each other. Stringer’s vocals have matured over the years and yet with this new wealth of material, he sounds more confident in this new format. Jack takes on a variety of roles throughout the show, taking on bass, guitar, lead vocals and harmonica, it shows what a talent he really is. Gary aswell swaps guitar for bass throughout, as does Amy.

The one thing with both Reef and Stringer Bessant’s ‘other band’ Them Is Me, they are very testosterone infused. Very rawk n roll (which is great!) but the key tonight is the addition of Amy Newton. Her vocals compliment both Gary’s and Jack’s on numerous occasions and gives the material, both old and new, a more subtle line which we haven’t seen before from these guys. Her playing style is very unique in comparison to the gents, but when she wants to rock out, she really does prove that she’s one of the guys! It’s nice to see the contrast on a stage, it works well on record, but live it just has a bit more oomph.

From the new record, tracks including ‘Hoosic’, ‘All The Horses’, ‘The Creatures’ and ‘Malefic Lullaby’ sound majestic in the set alongside the older material. ‘Walk To Zamberk’ in particular is immense tonight. Of older material to be given the live, full band renovation, ‘Wild Day’, ‘Give Me The Keys’ and ‘Lord Please Come’ sound more beefier. A particular highlight however is when the band leave the stage to just Jack and Gary to play ‘Self Is Here’ and ‘The Calling’ acoustically. It re-emphasises how delicate Gary’s voice can be especially. (One cannot help but wonder what seeing them perform ‘Consideration’ or ‘I’ve Got Something To Say’ in this style would be like in a stop-gap, mid-set piece at the forthcoming Reef reunion gigs would sound like).

However, back on track, tonight is purely about the StringerBessant material. In my mind, this was the best move they could have made. Two albums worth of tracks to showcase is impressive, but to have a unique and distinctive vocal that screams another band is always hard to disassociate yourself from. The SB Band tonight carry it off no problem. The key is confidence, and they all gave the impression that they have belief in this material. ‘Mark My Number Down’ and set closer ‘Day Break Tomorrow’ are incredible songs worthy of a bigger audience.

An encore of both ‘Turn Things Around’ and ‘Everybody’s Seen The Light’ take on main vocals from Amy. Gary is left prowling around the stage looking incredibly blissed out and smiling as he works the audience up to joining in. There is no individual showmanship, each band member is as important as the rest, the biggest member is the audience. As the band thank us and leave the stage one last time, there are cries for more, calls for tracks not played. It is very fair to say that the band have found a winning formula here. I just hope we get to see more from them in the not too distant future. This band need you to hear them. This band needs to be heard, now!

A quick note of support should also go to the extraordinary and talented support acts tonight; the beautiful Danni G and the remarkable and pretty Not Completely Blonde who both entertained the virtually sold out crowd. They are local as well so give them as much support as possible please.

For more photos from the evening: StringerBessant, Danni G and Not Completely Blonde