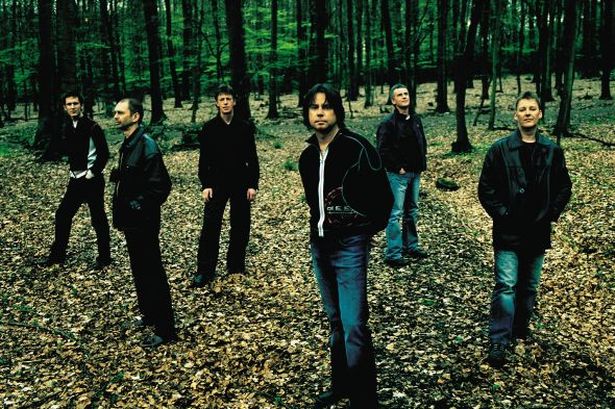 Scottish Celtic rock group The Run Rig Dance Band more formally known these days as plain old Runrig brought their 40th (yes – fortieth) anniversary celebrations ‘Party on the Tour’ to Birmingham Symphony Hall last night for an evening of song and dance. There wasn’t any time for the usual fresh faced support; after all with thirteen studio albums and a legacy spanning four decades under their kilts there was far too much to get through as it was.

Following a brief, dial twiddling, radio intro on the giant screen and accompanied by rapturous applause Runrig kick-started the night’s festivities with ‘Road Trip’ a thumping start to set the pace of things to come. ’City of Lights’, a firm sing-a-long favourite from the 1989 album Searchlight maintained the momentum and kept the fans off their seats. ‘Big Sky’ and ‘Maymorning’ from 1999’s In Search of Angels album with their Celtic rock overtones flowing through had all six tiers of the Symphony Hall dancing whilst Bruce Guthro (vocals and guitar) stirred the audience with cries of “Alive Again!” Party time had arrived.

Bruce dubbed the audience, “The Birmingham memorial Runrig whisky drinking choir,” and then unleashed the foot stomping, all chanting ‘Dance Called America’ that had everyone reeling. ‘Siol Ghorraidh’ the first of the night’s Gaelic numbers raised the tempo and increased the driving rhythm under the backdrop of a fiery black saltire cross before seguing straight into ‘The Engine Room’ with its electro bagpipe intro played by the multi-talented Malcolm Jones (guitars and accordion).

‘Book of Golden Stories’ presented a 40 year montage of memories dating back to 1973 – tickets, passes, tour vans and line-ups past and present were displayed on the giant screen. With the sentiment captured they rolled into the iconic, tear jerking ‘Every River’ to which the Birmingham audience duly sang and swayed along to.

The festivities continued after a short interval, apparently the first time in decades they’d had one, of which Guthro joked that they could “Hook back up to our oxygen tents.”  Jones was joined in an accordion duet for ‘In Search of Angels’ with Runrig newbie Brian Hurren on vocals (keyboards and accordion). The band with Calum Macdonald (percussion & vocals) and Iain Bayne (drums) stepping from behind their respective kits to play cajon drum boxes on ‘Tir A’ Mhurain’ took to the stage again. ‘Dust’ and ‘Sabhal aig Neill’ followed and with Rory Macdonald’s (bass guitar & vocals) almost anthemic Gaelic chanting Scotland had at last arrived to the West Midlands.

After an entertaining and amusing four drum number aptly entitled ‘Drum’ it was back to the powerful Celtic rock with which Runrig have become synonymous. ‘Rocket to the Moon’ was, for want of a better word, awesome and ‘Alba’ picked up the pace again with its echoic, crowd-chanting rhythm, this was Gaelic rock at its very best. If ‘Beat the Drum’ wasn’t enough to fuel the fervour further and invoke a heightened passion within the audience then ‘Skye’ certainly did. ‘Going Home’ rounded off the second-half of a brilliant, well rehearsed – which took some 40 years to perfect – set. Runrig left the stage to a standing ovation, and rightly so.

The five song encore started with front man Bruce Guthro’s crowd engaging, sentimental solo ‘Hearts of Olden Glory’. ‘On the Edge’ and ‘Clash of the Ash’ preceded the Runrig anthem ‘Loch Lomond’ with its powerful vocals; another audience participation classic; arms aloft they swayed and clapped with an almost ‘Radio Ga-Ga’ like feel.

The final song of the evening ‘And We’ll Sing’ rounded off a perfect evening. Bruce told the audience, “Although we’re done for tonight, we’re not done yet.”  For a few hours Birmingham Symphony Hall was from start to finish one hell of a céilidh (kaylee). Here’s to Runrig – here’s to the next decade.