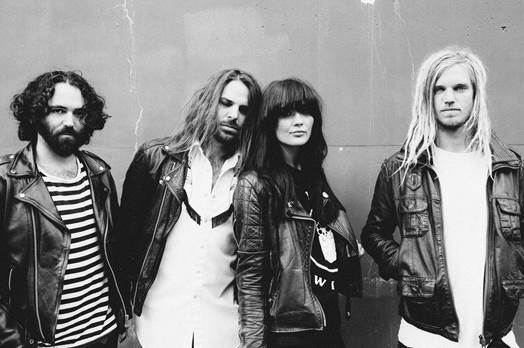 Since their formation in 2014, psych-blues powerhouse Saint Agnes have released three sell out singles, a live EP and cemented their place as London’s most exciting live band. Now, they’ve returned with ‘Merry Mother Of God Go Round’, out via Death Or Glory Gang Records on December 9th. The raised hackles of Kitty Arabella Austen (Lola Colt) and Jon Tufnell’s voices roughly brush up against descending strings of power chords, whilst the chorus sinks its rusty sing-along hooks into your brain with stoned rapacity before following its thundering drums into doomsville.

‘Merry Mother Of God Go Round’ was recorded at the analogue Soup Studios in Limehouse on tape and engineered and mixed by Dave Holmes. It’s the second single in a series, with fans vying for new material since the tear-away success of ‘Sister Electric’, which sold out its lathe cut vinyl release on pre-order.

Merging effortlessly raw guitars with true rock n’ roll swagger, Saint Agnes are a phenomenon that simply need to be experienced live. A sense of unifying camaraderie fills the air at their shows as the atmosphere is thick with anticipation: something not often witnessed on the London live music circuit.

Churning fuzz bass reminiscent of Black Rebel Motorcycle Club and bruising, Bonham style drums provide the backbone of a band that sound something like The Kills providing the soundtrack to Easy Rider. Haunting breakdowns and distant harmonica earned Saint Agnes their Ennio Morricone comparison, but dig deeper and you’ll find the influence of legendary doomsters Black Sabbath and much much more.

Saint Agnes are performing their largest London headline yet, at Oslo, Hackney on Dec 8th.