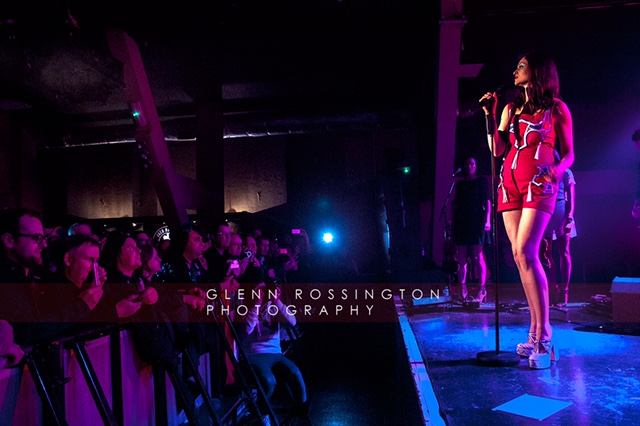 Sophie Ellis-Bextor performed at the o2 Institute Library in Digbeth last night and easily reminded people how much of a great performer she is. The first thing to notice when approaching the venue, was the size of the queue of people just waiting to catch a glimmer of the ‘Murder On The Dancefloor’ star that ended half way down the following street.

Sophie is known for her very loyal, colourful and large fan base, and with a mix of Australian, Russian, German, French and English all in one crowd, Sophie’s show brought everyone together on a mild Friday night with her dynamic disco set. The queen of 90’s dance music has certainly not lost her sparkle, literally… more on that later.

Kicking off her set with her latest release ‘Wild Forever’ including violinists/backing singers, Sophie made everyone dance uncontrollably. Performing brand new songs from her latest album ‘Familia’ and not forgetting her 90’s classics ‘Groovejet (If This Ain’t Love)’ and ‘Love Is A Camera’.

Having relaunched herself with her last release ‘Wanderlust’ back in 2014, Ellis-Bextor is showing a slightly grown up demure these days. This doesn’t mean she has lost her cheekiness though. After the opening two songs she addresses the crowd stating that it has been a while but sees familiar faces. She also proceeds to flirt a little by telling the crowd how good they look and asking “have you lost weight?” whilst wearing a cheeky grin.

New songs such as ‘Death of Love’, ‘Crystallise’ and ‘Cassandra’ sit alongside the older material like ‘Love Is A Camera’, ‘Come With Us’ and a rocking ’13 Little Dolls’. A nice little touch is when the band depart the stage and leave just her and her guitarist to take on a couple of requests. We get stripped back of renditions of ‘The Distance Between Us’, ‘Me & My Imagination’ and ‘Mixed Up World’.

The second half of the set gets off to a semi-romantic start with a gorgeous version of ‘Young Blood’ but then gives way to a disco infused finale. ‘Come With Us’ sees Sophie run off to the side of the stage and return in a sparkly green dress and launch in to ‘Take Me Home’. Bextor and the band run through covers of Modjo’s ‘Lady (Hear Me Tonight)’, Moloko’s ‘Sing It Back’ and a stunning rendition of The Freemasons ‘Heartbreak (Make Me A Dancer)’. The set completes in true fashion with ‘Murder On The Dancefloor’.

As the band run off stage to screams of an encore, only a handful of the audience clock that Sophie, her guitarist and the violin players have snuck their way to the mixing desk at the back of the room. For the encore we get a gorgeous raw and unplugged version of ‘Here Comes The Rapture’.

Sophie Ellis-Bextor certainly knows how to put on a show and left many people tonight with smiles on their faces and eager for more. Let’s hope it’s not another 3-years before she returns with another set of tour dates.