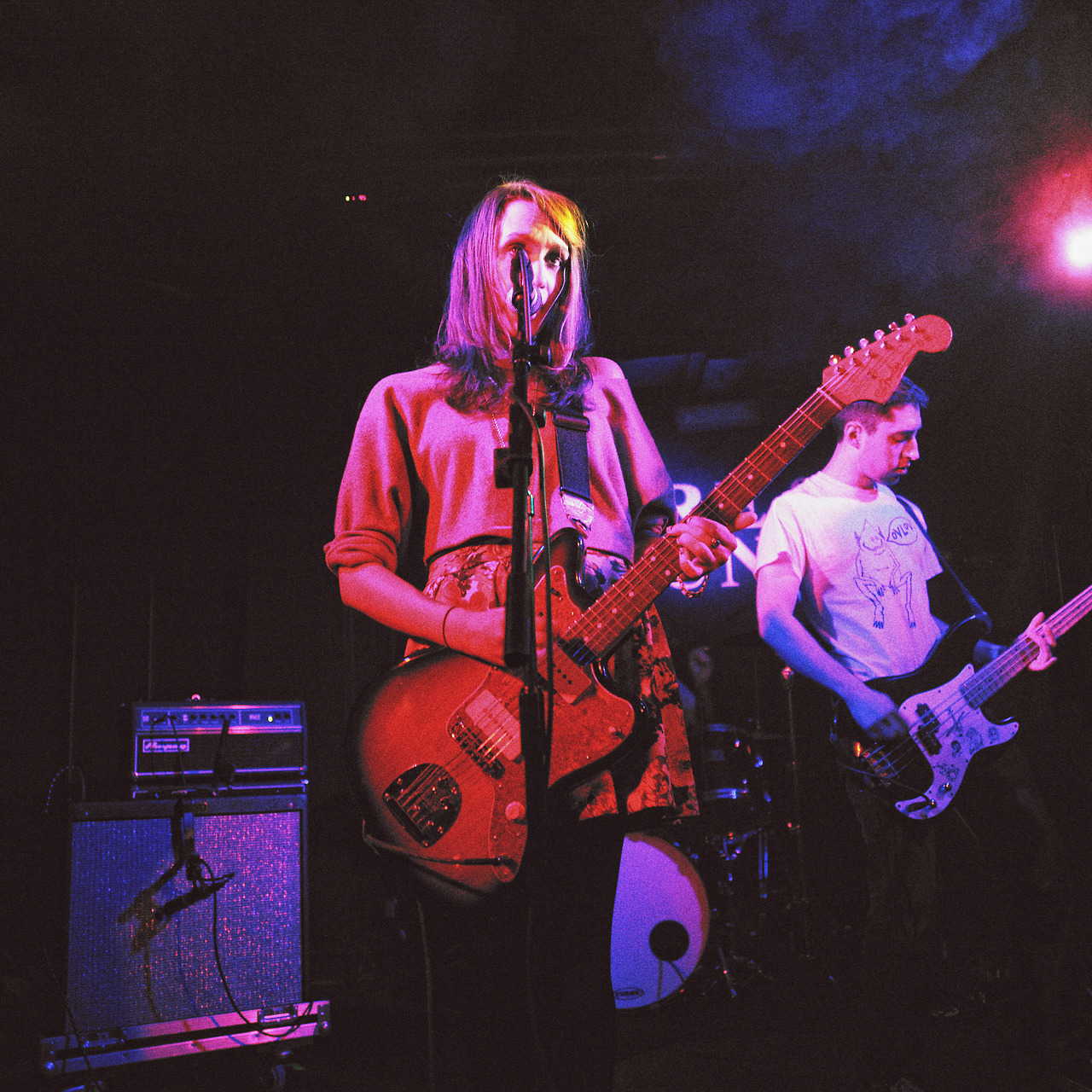 The hype machine well and truly kicked into action for SPEEDY ORTIZ following the release of their debut LP, Major Arcana, back in 2013. Tonight, however, marks their first ever UK (and European) show, so it’s fair to say that, for fans who’ve been waiting months for the chance to check them out live, expectations are high. Their 90s-influenced yet undoubtedly 21st-century garage pop sound has seen them hailed as one of the most exciting emerging bands of the past 12 months, and with their debut European tour about to get underway at Birmingham’s Hare & Hounds, this should be the start of something very special.

First though, support act JOANNA GRUESOME take to the stage. An infectious blend of indie and punk, they get the crowd clapping and cheering, if not quite kicking off in the way their energetic live performance deserves. Songs like ‘Secret Surprise’ and ‘Graveyard’, taken from their recent Weird Sister LP, are delivered with aplomb, and they will certainly have left a lasting impression on those listening.

When Speedy Ortiz take unassumingly to the stage, it almost seems that the occasion is getting to them. This will be the first song they ever perform live on UK soil. Fortunately, from the moment the jagged opening riff of ‘American Horror’ starts to ring out, they show just why they’re being touted as one of the best live bands around. Guitarist Matt Robidoux goes all out, unleashing a torrent of energy as he hammers his way through the song, dragging water bottles across the strings so violently that he ends up breaking one, tearing it from the neck and still managing to finish. As he frantically changes his string, the band take a quick moment to talk to the crowd, unassuming and apologetic for the delay. It’s just one of those nights where it doesn’t really matter, and given the band’s reputation as a player on the East Coast’s burgeoning DIY scene, it comes with the territory. String changed, and they’re off again, and from there, the set is flawless.

Mixing it up with tracks from their latest EP Real Hair and Major Arcana, the songs gain a grungier edge when translated into performance, compared to the easily detectable pop hooks that litter their recordings. ‘Tiger Tank’ really gets the first few rows going, as Mike Falcone’s ever-present beats lead in to its overdriven opening section. “Oh my mouth is a factory for every toxic part of speech I spew” laments vocalist/guitarist Sadie Dupuis, her voice every bit as ethereal and stingingly seductive as on record, even when the crowd threaten to drown her out as they scream along to the song’s many vocal riffs. ‘Plough’, with its brutally catchy chorus hook of “Why’d you pick a virgin over me?” is equally energetic, undoubtedly one of the catchiest songs on the LP, and another song that gives the crowd plenty of excuses to jump around.

‘No Below’, unquestionably one of the best songs to be released in 2013, feels even more powerful and emotive live. Dupuis’ astonishing lyrical brilliance really comes to the fore, as her reflections on lost relationships and new love are swelled along by the confident musicianship that has defined the show so far. As it builds to its distorted climax, the band really let lose, before masterfully retreating back to the song’s opening, stripped-back style. From the wall of cheers that follow, it seems fair to say that this one is a real crowd pleaser.

At just nine songs, their set feels quite short (although this may be the result of the earlier broken string), but as closer ‘Shine Theory’ begins, that’s the last thought on anyone’s mind. The rapt attention that the band have commanded over the course of their forty-minute set has lent the whole thing a timelessness that makes it difficult to tell exactly how long they’ve been playing.

With the rest of their UK and European tour to come, the band will undoubtedly hit their stride even further as they go on, but I sense that having been here to witness this first UK show may be something that the rest of the crowd and I are able to brag about in future.