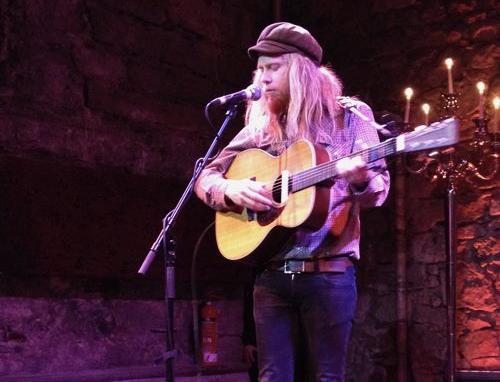 “I feel very lucky to be able to come back here to The Caves,” Stu Larsen confides. “I’ve never played any other venue in Edinburgh.” Larsen stands in the warm lighting in the candle-lit main vault of one of Edinburgh’s most unique venues. The caves are complete with miniature stalactites and a dungeon. “I got trapped in the dungeon next door, that’s the truth,” he explains after returning to the stage for his encore. “Have you seen that room next door? You should check it out through the bar, it’s quite scary.” Edinburgh is the second stop in Larsen’s UK tour, which is only one part of his non-stop four month tour from Australia to North America, with 57 dates in total.

Next to Larsen on the stage is a full-size beautifully ornamented harp; owned by his opening performer, Esther Swift. She supported Larsen the last time he was in Edinburgh, and at one point he invited her on stage to perform an impromptu collaboration for one of his songs, ‘Maybe I am.’ This time they played the same song together but he admitted that they had practised it a bit before this show this time. Swift captivates the audience with polished harp playing and beautiful lyrics.

When Larsen appears on stage in his trademarked skinny jeans and plaid shirt, he opens with ‘Seaforth MacKenzie,’ off his 2011 EP, Ryeford. Energetic and connected to his music and the audience, he swivels on the soles of his shoes oscillating back and forth in front of the microphone. After ‘Cocoon’ from the same EP, he sets up his harmonica to play ‘Ferry to Dublin,’ a track from his upcoming album.

He explained the meaning behind ‘Ferry to Dublin,’ with a grin, explaining that he wrote it when he was touring with Passenger in the UK for the first time; “He [Passenger] got sick after two months, and then he went home to Brighton and I continued the tour on my own…and then I met a girl and then I spent a month trying to woo this girl… and nothing happened, she wasn’t interested….” At this, the audience collectively coos in sympathy. “…its fine, it’s fine. I actually found out she doesn’t like boys,” the crowd laughs, “So then I jumped on a fairy to Dublin and I wrote that song about her. But when I was telling that story in Perth, I think I got impatient with myself and stopped telling the story about halfway through, so I hadn’t mentioned the girl at all and then I started singing that song and everyone thought the song was about Passenger,” he chuckles, “…it is not.”

Larsen moves his capo up to the fifth fret to play another new song, ‘Thirteen Sad Farewells,” before launching into a cover of Coldplay’s ‘Fix You.’ “I promised myself I would stop singing this song but then someone requested it on Facebook so I have a dilemma…so I’m going to play it anyway.”

After his cover, he plays ‘San Francisco’ which proves to be a crowd favourite. He picks up the harmonica for a second time to play ‘This Train,’ a track which would normally be played with his 2013 EP companion Natsuki Kurai.

By the end of the night, the audience is so connected to Larsen and his music that it’s difficult to accept the last song of the show. Charismatic and infinitely talented, it’s clear to see why Stu Larsen is repeatedly invited back to the same cities tour after tour.