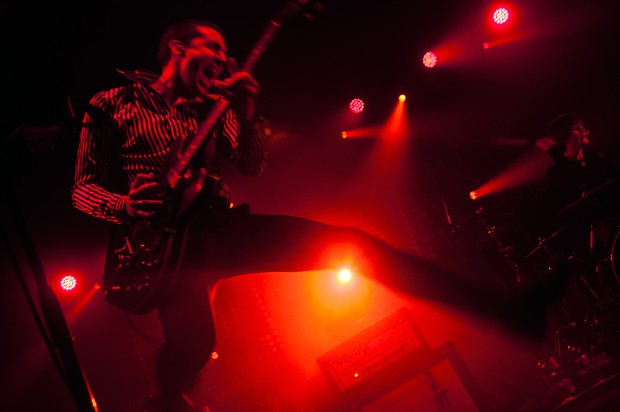 It seems a long time ago that an early twenty something Miles Kane was fronting The Rascals; a good, but perhaps not renowned indie band from The Wirral who’s debut album just broke the Top 100 albums (I say just…). Within a couple of years, the Merseysider had left the band to focus on other projects – most notably The Last Shadow Puppets with Arctic Monkeys front-man Alex Turner. Now, with two solo albums under his belt and last years Don’t Forget Who You Are hitting #8 in the Albums Chart, the singer is well and truly a man in his own right.

Kicking off the opening night of the tour was Telegram – “Like Telegram Sam” says singer Matt Saunders. The Caerphilly band (who definitely sing with their accent in tact) are a very straight-forward indie band. Built around the incredible drummer, the emerging band warmed up the crowd nicely. Whirring guitars and heavy riffs were definitely the way forward, with the stand-out track ‘Follow’ leading the way. Telegram did their job nicely and with such a clean live set, will certainly be turning heads throughout the summer festivals.

As the stage was being prepared, Oasis classic ‘Whats the Story (Morning Glory)’ blasted throughout the venue, the 1995 hit saw the crowd bounce and sing in unison, as if the Gallagher’s were there in person. This warm up worked; as lights dropped the crowd sounded deafening. Miles Kane; with short hair and wearing a black and white stripped shirt bounced onto the stage, launching almost instantly into ‘Darkness In Our Hearts’ from last years Don’t Forget Who You Are. “Gotta be, gotta be ready for this” shouts the opening lines – judging by the crowds wild response – the Wulfrun Hall was.

The set was mixed between new and old very well, the anthemic nature of ‘Counting Down the Days’ and ‘Inhaler’ made the first few tracks pass by. Standing on the edge of the stage; tilting his guitar to the crowd, Miles ‘shot-down’ members of the audience from his guitar during the closing sections of ‘Inhaler’. The temperature inside the venue increased drastically; ‘Your Gonna Get It’ saw the centre of the Wulfrun bounce; with people raised high on top of  shoulders, it felt more of a festival than an indoor venue. There was an airing of ‘Little Illusions Machine (Wirral Riddler)’ the B-side for Arctic Monkey’s ‘Hellcat Spangled Shala-la-la’; the track, although not popular saw the crowd sing it back word for word.

‘Give Up’ saw Miles combine his cover of The Rolling Stones ‘Symphony For the Devil’ effortlessly. His cheeky personality encouraged the crowd to shout back the line “You’re pretty good looking, But I’m looking for a way out” louder and louder; with the track over, Miles looked to his band, before launching into the chorus again.

“Wolver-fucking-hampton. What a fucking way to kick open the tour” exclaimed Miles before debut album Colour of the Trap track ‘Rearrange’ which went into set closer ‘Come Closer’; “Come a little closer Wolverhampton” shouted Miles. The extended outro saw Miles leave the stage once, before returning to encourage the crowd to continue the “Ahhhh, wooooo” section long after the lights went up.

Returning on his own with an acoustic guitar, Miles played a stripped back version of ‘Colour of the Trap’; the song felt like a perfect summer hit. Again seeing a number of the front section on shoulders swaying in unison. The band returned to complete the hour and a half set with the latest album title track. The crowd still had energy; with a number of crowd surfers going over during ‘Don’t Forget Who You Are’ – the sing-along anthem certainly left everyone more than impressed.

Miles Kane has developed over the past few years to become one of the countries fine live acts. Performing at this years V Festival near Wolverhampton in the summer, this taster was more than impressive. With anthemic hits and sing-along tunes the diverse crowd seemed to leave the Wulfrun Hall a little sweaty, but more than impressed.