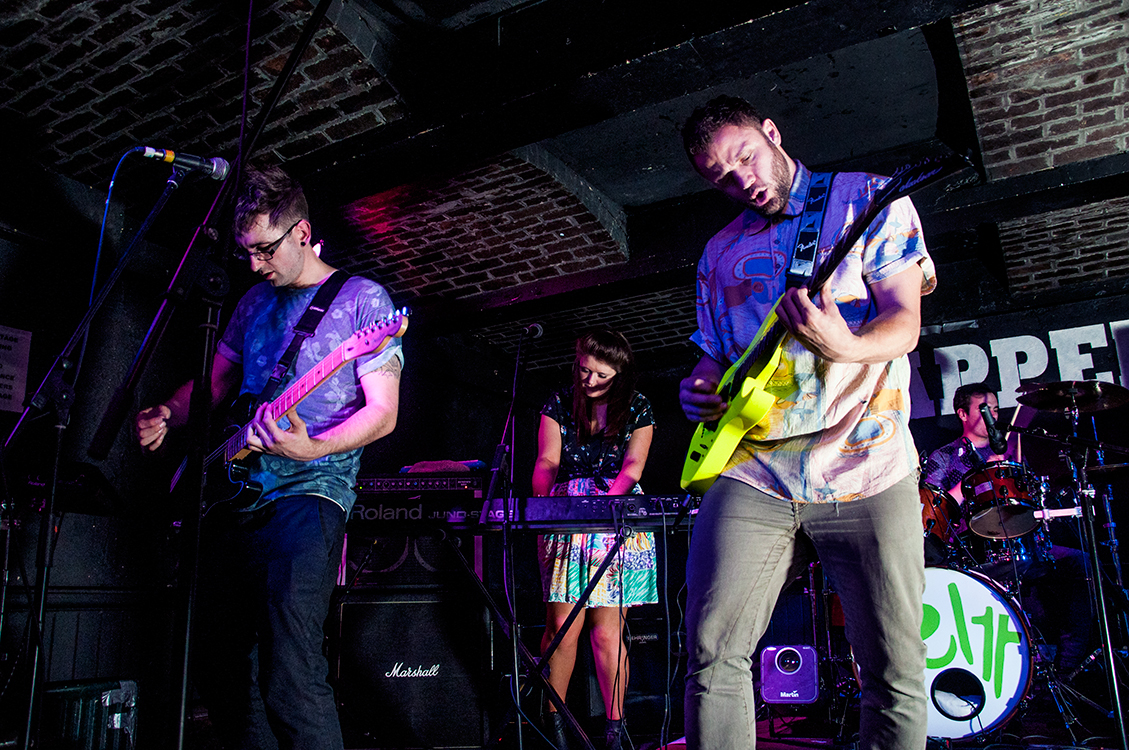 Big things have been happening over in Lichfield over the last 18 months, rockers Stubblemelt have been working on and finally completed their debut album ‘Gypaetus Barbatus’. Last night saw the first of 2 Sold Out shows in the intimacy of Birmingham’s Flapper & Firkin establishment where the band are launching the album.

Boasting a different lineup over the days, tonight’s show is opened by the talented Brains for Breakfast aka Walsall musician, Andy Webster. Armed with an acoustic guitar, he is an entertaining opener and his songs carry a slightly political undertone. Highlight of the set for novelty value was when he brought out his Ukelele and performed a cover of Elvis Presley’s ‘I Can’t Help, Falling In Love With You’. His own material, including a new song he has been working on were very well received and certainly made the audience want more when his short set was over.

Next on the bill were the glorious Royal Elephants. They picked the pace up by having a full band behind them and launched into a set of high octane pop/rock. The short set was again very pleasing and seemed to fulfil in warming the crowd up nicely. Final support act of the evening were MisterNothing who featured Mitchell Emms from BBC1’s The Voice. Performing slightly more akin to the headliner acts’ style, this was a very loud, rough and ready performance of almost metal tastes. A superb Nirvana cover midset proved a highlight and certainly got the audience’s blood pumping.

Anticipation in the room had built nicely, and finally it was time to “unleash the bird” upon the world (N.B. A phrase that Stubblemelt have been promoting leading up to the album itself). The band arrived on stage amidst cheers and applause from the packed out audience and launched into ‘The March’. It is difficult to pigeon-hole the ‘melt. Theire style mixes up elements of metal with punk, dance and even a saxophone makes a few appearances. The music is fresh and every element of the gig tonight has been meticulously thought out. ‘Überloader’ makes the room bounce, it’s dance undertones and high-energy performance can’t help but make you do anything but dance.

Bassist Tom Marshall appears to be the most free of the players tonight as he leans forward in to the crowd on numerous occasions and high-fiving as many people as often as he can. Drummer David Ashforth sounds thunderous tonight. Throughout every track the walls of the venue are vibrating thanks to his powerful rhythm. It’s no wonder that not even half way in, both he and Tom remove their shirts – clearly because they are both wet through with sweat from the vibrant performance so far. Guitarist Mat Giles is pulling out solo after solo but also doubles up as a funny wit to match that of frontman Kyle Perry. Their banter between songs with each other and the audience makes the final ingredient. Finally, keyboard player and saxophonist of the group, Amy Collins adds the final pazzazz to the group. She is the newest member of the band but also seems to attract the biggest following as repeatedly girls in the audience start chants of “Amy!-Amy!-Amy!”

Stubblemelt certainly have a tremendous arsenal of tracks from this album. There is something for everyone, literally, something for everybody. Things get slowed down with a touching “love song” in ‘Only A Kiss’, rock out with the stunning ‘Welcome Back’ and ‘Man Vs Venus’ and even semi-prog-rock out with the closing ‘Journeyman’. The encore starts with the band and their entourage joining them holding what look like giant wicker bird wings, an ode to the album title ‘Gypaetus Barbatus’ or ‘Bearded Vulture’. Singles ‘Evil Insane’ and ‘See Your Lovers’ close the show in fantastic style with the audience joining them in celebration as they walk off stage. A humbling experience to have been witness to the birth of the Stubblemelt story for everyone there and the band themselves.

The fun concludes tonight with a second show, this time featuring; Chris Thompson, Brothers of Cademon and The Two ‘N’ Eights supporting. Next up are a number of festival appearances across the summer, if you get chance, go and see the spectacle of Stubblemelt for yourselves.