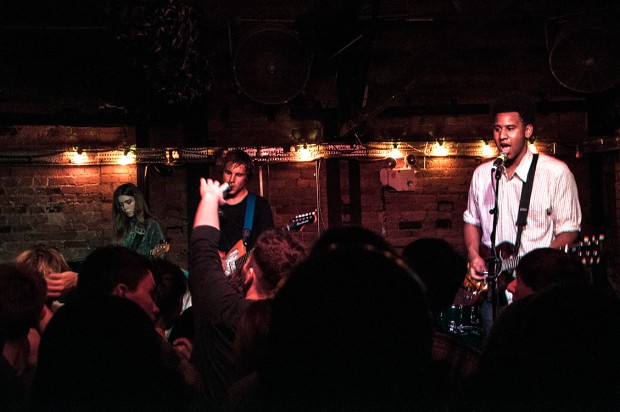 Another of the UK’s hottest dates and everyone is sweltering in one of Birmingham’s more intimate venues. Tonight’s sold-out show from hometown heroes Superfood is also their first headline show. The anticipation around the venue is heating up as supports Dumb and Sugar put on magical performances and really work the crowd up into a sweltering mess.

Finally, the moment comes when Superfood make their presence known and saunter on stage with a quiet confidence. The crowd erupt and visually this picks the band right up. Any pre-show nerves have been lost as the opening track causes the kind of reaction most bands can only dream of. It’s good to see Birmingham bands sticking together as in the crowd are members of Jaws, The Lines and Swim Deep. There is a real presence and confidence exuding from the underground/emerging Brum Scene that it is a joy to witness.

The crowd are really forming part of this show, various comments from the band spur them on more. The fans sway from wall to wall and the mosh pit is exciting. It even gets to the point where people are hanging off the ceiling! To say there is an air of excitement is an complete understatement. From this performance, it’s easy to see why. The band are confident, their followers are excited as hell, and if they keep this kind of show up, they will have a brilliant career ahead of them.

Ending the hour-long performance with single ‘Superfood’ sees the entire crowd singing along and punching the air with justification. Definitely one of those “I was there then” moments. If Superfood do not make a dent in the music scene alongside Peace, Jaws and Swim Deep then something is incredibly wrong. Mark these words, Superfood will be known before too long!