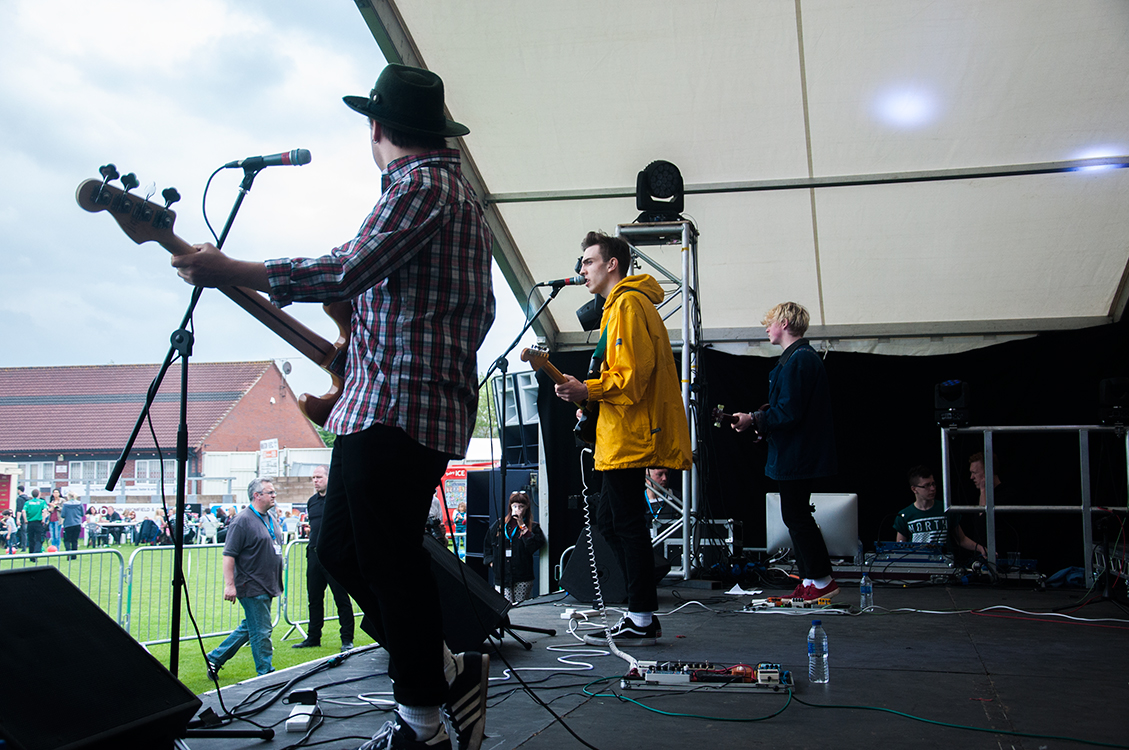 Starting up a festival in this day and age must have a billion questions; “Will people turn up?”, “Will tickets sell?”, “Who can I get to play?” amongst many others. Well the inaugural Big Boro Festival in Nuneaton started as a rousing success. Set in the grounds of Nuneaton Town Football Club and the brainchild of former player Kyle Perry, The Big Boro certainly left it’s mark.

Two stages, one on the pitch and one in the club house, fairground rides, food stalls, family entertainment and local trade stands, all offering a good mix of bespoke items.

The day kicks off for us with DROP DOWN SMILING on the main stage. They are a lively local act with a great arsenal of songs which seem to entertain the small early day crowd.

THE ESTABLISHMENT are next up on the main stage. Managed by former footballer Dion Dublin and releasing a single to support the England Football Team on the Monday. Their set is pampered with enough hits of their own to keep the crowd entertained. Finishing with an exceptional cover of Ocean Colour Scene’s ‘The Circle’ sees them off with good crowd enthusiasm.

Perusing back to the sub stage, next we are greeted by MISTERNOTHING mid set. Having supported Stubblemelt at The Flapper a few weeks previous, this set was nothing shy of exhilarating. Breathing life in to some of the onlookers, they utilise spare chairs to jump off and pull all manners of rockstar poses. They are an early highlight and seem to finish criminally early.

Taking a moment to walk around the site, the stands are being investigated by parents as the children ride on the funfair, food and drink are being consumed and the atmosphere is relaxed and happy. Exactly what is needed as the sun stays out.

Next up on the mainstage, we are introduced to the next band as “potential headliners next year” – and with their debut album due in September and the rave reviews they are getting from recent live performances, JAWS have a lot to prove. Within the opening notes of their set, they put all worries to bed. Their performance is faultless and confident. Songs from the aforementioned album sound impressive; ‘Be Slowly’ and recent single ‘Think Too Much, Feel Too Little’ sound grand. Former single ‘Surround You’ is played criminally early in the short set, but is an instant highlight. Based on a performance like that, it is easy to see how they could be headliners in years to come.

Walking through the field towards the club house, there is still a lot of life around the site and people chatting away and enjoying themselves. Numerous times the phrase “great value for money” was heard – and for less than £20, that is certainly good value for money! As we walk into the club house, THE RETROSPECTIVES are ending their set to great applause and cheers from the large crowd.

Next up on the mainstage, our Festival hosts take over. STUBBLEMELT, fresh from a two night residency in Birmingham, having launched their debut album, power through an intense set. Opening with ‘The March’ there is a decent crowd for Nuneaton to see their former player lead his band through an epic set. ‘Uberloader’, ‘Evil Insane’ and ‘See Your Lovers’ showcase them off to great proportions. The video screens are used wisely to project their singles behind the band playing.

Moving back over to the Club House, we catch the final few songs of Leicester lad, JERSEY BUDD. Backed up by a full band the room is in full swing. The small crowd utilising the tables to sit and observe as well as standing and showing appreciation. Jersey’s vocals sound glorious as the sun begins to break in the clouds and shine in through the window.

Back to the main stage, the crowd has grown more and next up is the first of the main bands for the day’s entertainment, 60’s mod influenced THE RIFLES. Greeting the crowd with a enthusiastic “Hello Nuneaton!” they launch in to a very tight and compact set. Powering through tracks like ‘The Great Escape’, ‘Robin Hood’ and ‘Local Boy’, they go down a treat. Set closer ‘Romeo & Julie’ sees the enthusiastic crowd beg for more. As the compere returns he entices the band to come back out for one more and we are given a rousing rendition of ‘Under & Over’.

Taking a break as the early evening sun begins to dip it’s head, the site is looking full of life. People are milling about still enjoying themselves, families are sitting down eating dinner and the fairground is in full swing.

Next up on the mainstage are local Brummie boys THE TWANG. They are greeted with a vibrant and enthusiastic crowd. Frontmen Phil and Saunders roll around the stage bashing out each tune with gusto. The opening onslaught of ‘Larry Lizard’, ‘Barney Rubble’, ‘We’re A Crowd’ and ‘Either Way’ would be enough for a short festival set alone, but the band’s enthusiasm and energy being fed from the crowd allows for more highlights. ‘Two Lovers’, ‘Wide Awake’ and the closing ‘Cloudy Room’ further add to the excitement spreading around the site as the sun fades.

The last act of the evening are the sprightly SCOUTING FOR GIRLS. They arrive to a mass cheer from the audience and pour out the hits. ‘Heartbeat’, ‘Elvis Ain’t Dead’ and ‘This Ain’t A Love Song’ all manage to entertain the masses. Crowd and band interaction is wonderful as the night draws in, complemented by the video screens shining bright behind the band. The encore is the song everyone wants to hear and rocks loud into the summer air. ‘She’s So Lovely’ sounds epic and closes the band section perfectly. The final act of the night is quite literally a homecoming Queen, DJ LISA LASHES provides 2 hours of dance tunes as the crowds still party on. Fire walkers and other entertainment graces the middle of the field to add to that little extra excitement.

All in all for less than £20 there is not much to complain about. A great atmosphere, wonderful people and brilliant music. A whole host of potential for a new festival with a lot of vibrance. Welcome to the scene The Big Boro!