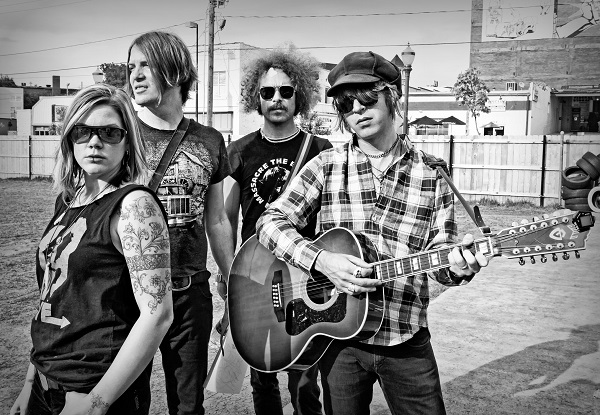 It’s hot. Ridiculously hot. In fact, the hottest day of the year so far is still in full swing as Dandy Warhols fans begin to arrive into Leicester’s Academy 2 venue this evening. Not even a bit of good weather will keep them from piling into a dark, sweaty venue for the chance to hear the alt-rock veterans play for the first time in a very long while. Since first winning over the hearts and minds of disenfranchised twenty-somethings everywhere with hits like ‘Bohemian Like You’ and ‘We Used to Be Friends’, the band have established themselves as one of the most irreverently talented acts on the circuit, something tonight’s performance certainly confirms.

To warm the crowd up (as if that was even necessary in this sweltering heat), are Brighton rockers DARK HORSES. Dressed totally in black, they couldn’t look further from the sunshine still blazing on outside, but the sweat pouring from their faces as they tear through their brief but memorable set tells a different story. Their sound matches perfectly with the Dandy’s own distinctive style, producing a similar wall-of-sound feel that comes even more to the fore when their third guitarist switches onto a masterfully-deployed synth.  Opening with the brilliant ‘Live on Hunger’, and closing with the riotous finale ‘Radio’, their brand of heavy rock goes down well with the expectant crowd.

When the main act take to the stage, the whole room goes wild. THE DANDY WARHOLS have such a large and impressive back catalogue, it’s hard to know what to expect from their live shows, but tonight fans are treated to a set that pulls heavily from their second album, The Dandy Warhols Come Down, and their 2000 breakthrough album Thirten Tales From Urban Bohemia. It’s a popular choice, and soon the whole place is rocking with the Dandy’s overwhelming, ever-impressive sonic assault.

The usual line up are all present and correct, and vocalist Courtney Taylor-Taylor has his familiar two-mike set-up on the go from the off. Even when keyboardist Zia McCabe’s synth drops out, it does little to dampen the gusto with which the band delivers their favourite-heavy set. Highlights included brilliant renditions of ‘We Used to Be Friends’ from 2003’s Welcome to the Monkey House, building up to an incredible finale of ‘Bohemian Like You’, ‘Get Off’ and ‘Godless’ (where the band were joined by The Specials’ trumpet-player and local lad Jonathan Read).

Tonight The Dandy Warhols are on top form: their set is a massive crowd-pleaser, and the good times are flowing so free that the bar literally runs dry. While their recent albums haven’t necessarily had the same mainstream cross-over as they did back in the early noughties, there’s no doubting their song-writing talent and brilliantly, noisy live impact. A great night all round, and a compelling reason to check out their upcoming live album release, if anyone here needed any convincing.