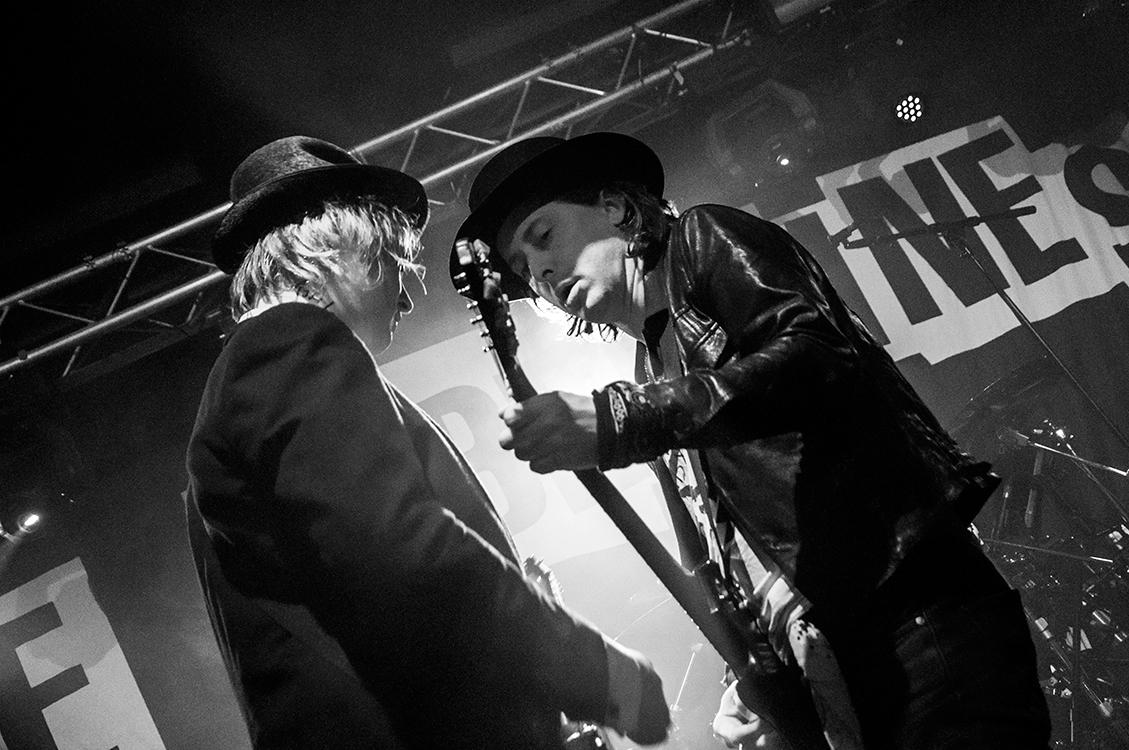 Chaotic, riotus, shambolic and bloody brilliant. Those are the only words needed to sum up a Libertines gig really. After selling out this 800-capacity venue within minutes of the tickets going on sale and only the day before the gig was to take place, somehow, we knew this would be special.

Using this show as a preview to their huge UK Arena tour currently taking place, it gave the Libs chance to stretch before they run. Not that they need it. At a little after 9:15pm, the lights dim and David Bowie’s ‘Diamond Dogs’ blasts through the PA. The band saunter on to the stage and after a muffled ‘hello’ from Pete Doherty, they lauch into a frivilous rendition of ‘Barbarians’. The crowd tonight are ecstatic and wild, within the first few seconds of the lights being dimmed, a pint flies through the air and spills all over Carl Barat’s setlist.

It’s easy to forget that the band have not long put out their long awaited third album ‘Anthems for Doomed Youth’. But that is what tonight and the UK Tour are all about. The wealth of new songs that are in tonight’s setlist slot in perfectly between the old ones. ‘Fame and Fortune’, ‘Gunga Din’, ‘Heart of The Matter’ and the old favourite ‘You’re My Waterloo’ sound glorious and riotous all the same. It’s also nice to acknowledge that ‘Belly of the Beast’ is given it’s live debut tonight too.

Going to a Libertines show, you do expect it to be the Carl n’ Pete show. On the whole, it is. Pete is the little brother who is naughty but always does his best, Carl is the older, wiser brother. However, watching the pair in between songs and in some instances, during songs, it is clear that the love they have for each other is still strong. During the encore, there’s a moment when Carl is playing with Pete’s braces and trying to pull them up over his head. One of those perfect moments.

Credit must also be given to ‘the quiet one’ John Hassall, stood solitary in his corner of the stage, playing along, singing, but yet not saying a word – he doesn’t need to. However, the “powerhouse” of the band is Gary Powell on drums. Keeping the timing for the rest, thundering through songs, without him tonight, the set would have been pretty shambolic. Entertaining, but a shambles.

The big hits of the night are without a doubt, the classic tracks. Carl shows us what a complete romantic he is with a swooping rendition of ‘What Katie Did’ which sees the whole crowd singing and swaying along to the “shoop-shoop, shoop de-lang-e-lang” vocals even after the song has finished, right before Pete carries the room on an acapella version of The Top Notes’ ‘Twist and Shout’. ‘The Delaney’, ‘Horrorshow’, ‘Boys In The Band’, ‘Death On The Stairs’, ‘Vertigo’… they’re all there. ‘Can’t Stand Me Now’ serves one of the biggest sing alongs of the night as it appears early in the set. As the band close their main set with ‘Time For Heroes’, Pete takes a moment to dedicate it to his sister who is poorly in hospital and for tonight, retitles the track ‘Time For Heroines’.

The encore is a blitz of punk and passion. ‘Up The Bracket’ followed by ‘What A Waster’ and finally, closing the night off with a spectacular rendition of ‘Don’t Look Back Into The Sun’. The band bid us farewell and leave the stage to a rapturous applause. If the arena shows are anything like tonight, this could be their most productive and exciting tour in years. Welcome back the boys of the Albion, and long may you reign.