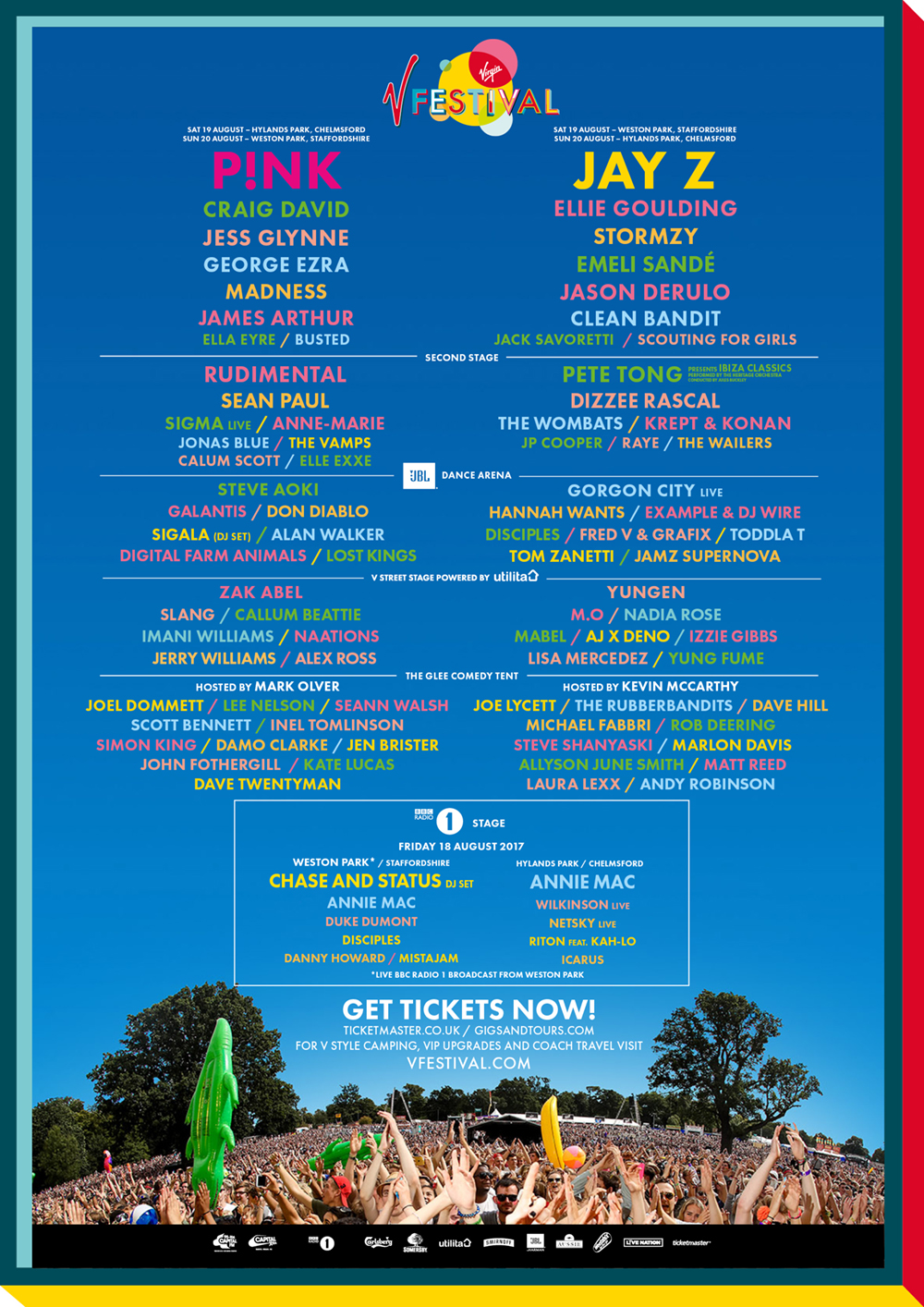 Already boasting an unrivalled line up bursting with the freshest pop talent from across the globe, Virgin V Festival 2017 today announces even more star-studded acts to join the bill. Virgin V Festival takes place on the 19th and 20th August in Hylands Park, Chelmsford and Weston Park, Staffordshire. Tickets are available at www.vfestival.com

Huge performances will come from pop sensation P!NK who is set to ‘Get The Party Started’ with her incredible acrobatic stage craft and major pop anthems as well as British golden girls Ellie Goulding, Jess Glynne and Ella Eyre who all return to the Main Stage across the weekend with a surplus of smash hits.

Jason Derulo will be turning the temperature up with his club bangers including ‘Want to Want Me’, ‘Talk Dirty’ and his latest anthem with Nicki Minaj, ‘Swalla’. Bringing the party classics will be Clean Bandit, known for their unique blend of Grammy winning classical and dance music, alongside Anne Marie who features on their number-one hit ‘Rockabye’. James Arthur is set to perform fresh off the back of his North America tour where he’s taking the States by storm with heart-felt guitar tune ‘Can I Be Him’, while the UK’s most loveable boy-band The Vamps are sure to get the crowd dancing ‘All Night’.

Leading the newly announced V Street Stage Powered by Utilita Energy line up at Staffordshire on 19th August and Chelmsford on Sunday 20th August is British singer-songwriter Zak Abel who rose to fame on Gorgon City’s UK Top 20 hit ‘Unmissable’. Having worked with a host of big league producers from Kaytranada to Wookie, he’ll be dropping his hotly anticipated debut album ‘Only When We’re Naked’ just ahead of hitting the stage at Virgin V Festival this summer.

Brit School graduate Imani Williams stormed up the charts last year after featuring on Sigala and DJ Fresh’s track, ‘Say You Do’, having then went on to record Don’t Need No Money with house DJ’s Sigala and Blonde, making her an act not to be missed this summer.

Playing host to some of the world’s hottest talent, the V Street Stage Powered by Utilita Energy will also welcome Unsigned Music Award winner Jerry Williams. With 5 million streams on Spotify and acknowledgments from BBC Introducing, the self-producing pop songstress is a one to watch.

Tickets are now on sale with fans advised to visit www.vfestival.com for official outlets.