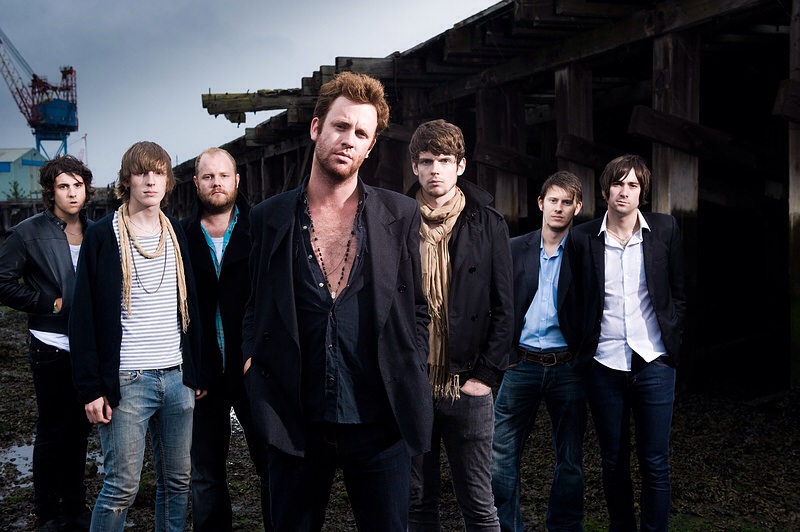 In a world dominated by electronic dance music, proper indie guitar bands are a welcome rest-bite from relentless auto tuned beats. Folk-rock Northerners, Young Rebel Set are in the start of a tour when they join us for a foot stomping set at the Lexington in London. Fresh off the release of Crocodile from late last year, they’ve grown up a lot since their debut three years ago. Deeper lyrics and at times a more anthemic sound is starting to shine through in their new material.

Launching straight in with an incredibly loud rendition of ‘Borders’, Young Rebel Set feel musically tight as we prepare ourselves for a guitar filled night of jangling musicianship. Matthew’s vocals are as charmingly Northern as ever and the crowd look smiling and nostalgic. New single ‘Tuned Transmission’ comes next, with cries of recognition from the crowd when the optimistic guitar riff starts and the rolling drums kick in. This is a positive smiler of a track, sounding just as good live as in the studio recording.

It’s the dirtier, more rock ’n roll sound of ‘Lions Mouth’ that finally gets the crowd moving. Matt’s deep, gravelly vocals are accompanied by lead guitarist Andy’s expert chugging riffs. Its moments like this when Young Rebel Set prove their indie credentials. With a classic sing-a-long guitar anthem and all five members – plus two extras – throwing themselves into their musicianship. It looks like they are actually enjoying themselves.

“This is an ode to our love affair with Germany. Lovely place; beautiful women and beautiful beer” slurs Matt as they launch into the more soft and reflective ‘Berlin Nights’ from the second album. This is the only song of the night which doesn’t sound better live than on the album. There’s a tender, rawness about the beginning of ‘Berlin Nights’ on the studio version, something that felt completely lost when on stage. Instead, it felt just like an indie anthem; the same as the rest of the setlist. This was the only disappointing aspect of the night, and in the grand scheme of things, falls insignificant when compared to the nostalgic optimism of the whole evening.

After ‘Show Your Feathers and Run’ – a ’90s-esque guitar ditty – the crowd goes mad as they scream for an encore. Strangely, Young Rebel Set don’t leave the stage, opting instead to shuffle about a bit before launching into two more songs to round off the night. Being initially afraid that they would leave ‘If I Was’ out of the setlist completely, there’s whoops of appreciation when Andy starts to play the familiar rolling jangles of guitar. A heart warming profession of love, ‘If I Was’ feels like the perfect way to sum up the night at the Lexington – there’s a real feeling of love for the Northern rockers. Last track, ‘Measure of a Man’ again showcases how musically tight they all play as a band. There’s echoes around the room as we all stomp our feet to impossibly catchy beats. Its over as soon as it began, and despite pleas of “12 more!” from the ever-loving audience, Young Rebel Set thank us for the night and leave.

The perfect two words to sum up the whole evening are Nostalgic Optimism. Seeing Young Rebel Set perform live was like a fond look back at the early naughties when stellar indie guitar bands like these guys still ruled the mainstream. Yet instead of being sad at this time having past, Young Rebel Set leave us feeling optimistic that there brand of music is still around, and when performed as lovingly as tonight, might be filtering back into the mainstream before we know it.