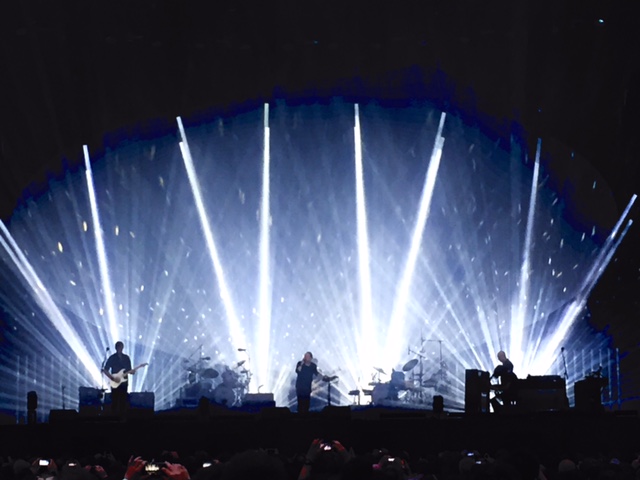 Having recently slayed the Main Stage at Glastonbury and hot on the heels 12 months after the release of their 9th album ‘A Moon Shaped Pool’, Oxford quintet Radiohead returned to the stage in Manchester for an epic night of classic anthems.

The gig had been rescheduled from two dates at the city’s Manchester Arena and condensed into a single performance due to acts of terrorism, but that did not tarnish the love to be felt around the stadium.

Coming on stage at 8pm sharp, the first surprise of the evening was the band launching into ‘OK Computer’ classic ‘Let Down’. As Thom’s vocals powered out across the sea of fans, there was shock and disbelief that this once rarely played song was in fact, opening the show tonight. This may even have been a slight nod to the fans who had tickets for the second performance and had to reschedule plans to accommodate the new location.

Radiohead are a band who not only take things seriously whilst performing, but also rarely treat their audience to a duplicated setlist from a previous show. Tonight they have nothing to prove, but ultimately put on a performance and deliver the highest quality show possible in playing for over two hours.

There are many highlights in the 26-song set which covers all of their albums except ‘Pablo Honey’ (But that’s not a surprise these days). Newer tracks from the brilliant ‘A Moon Shaped Pool’ such as; ‘Ful Stop’, ‘Identikit’ and ‘Daydreaming’ sound epic and sit perfectly alongside the more familiar tracks. Colin Greenwood’s opening bass line during ‘Ful Stop’ literally shake the foundations.

There are cheers all around when ‘OK Computer’s’ ‘Airbag’ opens up with it’s guitar riff. ‘Myxomatosis’ and ‘Bloom’ sound incredible as Thom belts out the words and the 50,000 strong audience return the harmonies. ‘Everything In It’s Right Place’ has been upgraded from a set closer to the middle of the set now, and the adjoining visuals on the oval video screen are a joy to watch.

Even the slower ballads ‘Pyramid Song’ and ‘You and Whose Army?’ sound fuller and see further crowd sing alongs. Again, the video screen during the latter simply featuring a giant close-up of Thom’s eye watching over the audience.

The banter between the band and audience is minimal, but there is something comically sinister in Yorke’s voice as he introduces ‘In Rainbows’ dirty rocker ‘Bodysnatchers’ by simply asking “Are you ready?” before launching in to the heavy riff. Just before launching into a heavenly version of ‘No Surprises’, Thom looks out to the audience and simply states “Fuck! There’s a lot of you out there!” as the xylophone intro begins to a huge cheer.

The main set closes with a heavy and rocked up rendition of “2+2=5”. As the breakdown ends and the song kicks up a gear, there is a huge mosh pit within the front standing circle and as the band leave the stage, the calls for an encore begin.

This is where things begin to get interesting. With a semi-regimented first half, it is nigh-on impossible to predict what the band will bring out for an encore. After beginning the show with ‘Let Down’, the opening choice for the encore is the traditional (for this tour) opener ‘Daydreaming’ from the new album. Combined with a stunning mirrorball in a triangle lighting effect, the song is simply beautiful. Whilst the album version can be a little flat, live the song is incredible.

Things get ramped up with a stunning version of ‘Nude’ followed by a thunderous, bass heavy version of ‘Lotus Flower’ from ‘The King of Limbs’. ‘Paranoid Android’ pleases the masses and again has some stunning motion detected visuals to match the power of the chord progressions. The final track of the encore begins with Thom simply on an acoustic guitar as he leads the audience in to a huge and gentle version of ‘Fake Plastic Trees’ which reigns out in to the Manchester skies. The band take a bow and depart, but again only for a moment as we are treated to a second encore.

With the roadies bringing out mid and high toms for Johnny and Colin Greenwood and Ed O’Brien, this could only signal one thing. A ramped up ‘There There’ echoes around the arena much to the audiences delight. Thom again addresses the audience and thanks them for coming tonight. He also briefly apologises for the schedule rearrangements and to say “sorry” launches in to one of their greatest lost tracks (which has finally seen the light of day thanks to the ‘OK Computer 20th Anniversary reissue) – ‘I Promise’. Why they let this song slip through the net is their business, but the song is beautiful, stunning and already amasses another of the evenings biggest sing alongs.

As the cheers begin to subside, Thom informs us that they are going to play a song they haven’t performed in a while and apologises as he may not remember the words. Hopes of ‘Electoneering’ being played as it had been tested in soundcheck were blown out of the water as they launch straight into the opening salvo of ‘The Bends’ which drives the audience wild.

After treating the audience to so many hits, classics and a couple of rarities, the final song of the night goes to ‘Karma Police’. Performed with nothing but perfection, as the song ends, the audience carries on with the “For a moment there, I lost myself” refrain. It’s sung with such velocity and vigor that Thom carries on strumming the guitar and Johnny joins in on the piano. The refrain could still be heard long in to the night after the band have left and the crew have begun to dismantle the stage.

With no more UK Tour dates now until a rumoured tour in 2018, tonight was something incredibly special and a perfect way to say “See you soon” to both band and fans. Always incredible live, tonight however, Radiohead excelled themselves.