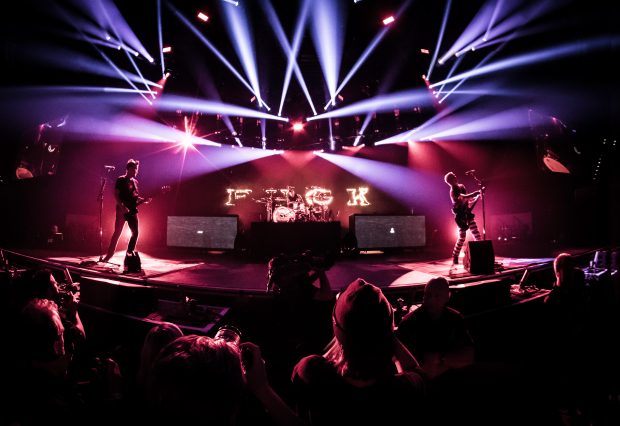 Blink-182 returned to Birmingham with new addition ‘Matt Skiba’ (Alkaline Trio), replacing ‘Tom DeLonge’ Most people would expect them to focus on playing material from their new album but the crowd roared with excitement when they blast on stage with 2003 single ‘Feeling This’. The band followed straight into fan favourite ‘The Rock Show’ and the place was well and truly rocking!

Hoppus then starts the opening track ‘Cynical’ off their new album ‘California’ and being one of the most instantly likeable tracks off the album, it was well received by Blink fans old and new. Smoke cannons inducted the classic tracks ‘What’s My Age Again?’ and ‘Anthem Part 2’, which had the entire venue singing along and feeding energy to the band.

They then burst into the ‘Take Off Your Pants and Jacket’ single ‘First Date’, which heavily features Tom DeLonge’s key guitar riffs and main vocals. The guitars are tight and note perfect, as is Skiba’s vocal as the verse starts. Although technically it is a massive improvement, you can’t help but miss Tom’s whiny vocal  and scruffy playing style that we have all got used to and grown to love over the last 22 years since the bands first release.

Next the band decide to go back to the new album and play their debut single ‘Bored to Death’. For me the Alkaline Trio sound brought in by Skiba is very prominent and I think it works better with the new lineup, rather than when he is attempting to cover Tom DeLonge’s style with the older tracks.

They then play ‘Built This Pool’ a short 17sec joke song / album filler which sends the crowd into a frenzy! It’s a perfect set up for the next two tracks off their self titled ‘Blink-182’ album, ‘Down’ and ‘Miss You’; both fan favourites.

Hoppus mentions that Barker wished to dedicate ‘Miss You’ to all the ladies in the house but Travis didn’t appear to know what he was on about. As with the other songs, Skiba does a great job of performing the chorus and gets all the crowd singing along with him.

Classics ‘Dumpweed’ and ‘Reckless Abandon’ were next. These two songs, written by DeLonge, were very personal to him and you could imagine Skiba feeling the pressure with these more than any others. It didn’t show though as the crowd go absolutely wild to these two massive fan favourites. Anyone still angry about Tom being replaced are soon jumping and singing along with the rest of us.

The band continue with a further six songs, a mix of old and new, before finishing with my personal favourite off the new album ‘Los Angeles’. There was no mention of it being their last song but after an impressive lighting show and extended ending, the band leave the stage and the lights go down.

Clearly not the end of the show, the crowd begin to chant ‘blink’ repeatedly followed by a massive roar when the band reappear to the stage and the lights go up. Blink hit straight into, without a doubt their biggest and most successful song to date, ‘All The Small Things’. Although most Blink fans would say they are probably sick of this song by now, hearing the basic but familiar words come out in the first verse gets everyone singing along at the top of their voices.

They finish with ‘Brohemian Rhapsody’, another sort of 30 sec ‘joke’ songs from the new album (which many say should have been a full track due to the catchy riff and clever drum fills) followed by the amazing and iconic track ‘Dammit’. The steam machines are going frantic, the confetti is falling and the guitar, bass and drums are tight as ever whilst driving out the final chords at the end of the show. Travis is replaced by son Landon who’s set to follow in his fathers footsteps. He performs one hell of a technical drum solo cheered on by the crowd.

All in all this was a fantastic performance by the band. Showing that regardless of what happens, Mark Hoppus and Travis Barker will continue the Blink legacy for years to come. As time goes on and the fans begin to accept Matt Skiba into the band, I believe the new material they write together will be some of the best in the bands history.

Whilst their foundations as a band were toilet humour and sexual innuendo, they have proven they are much more than that with evolving and innovative songwriting. Believe me when I say, there is much more to come!