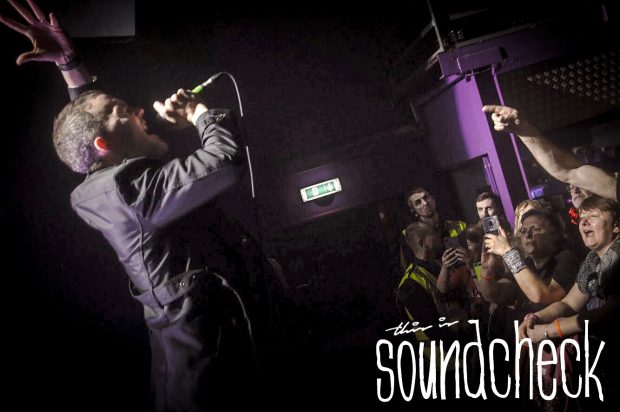 On a cold and damp Monday night, the hottest gig in town (literally) tonight can be found at North Staffordshire’s best intimate venue in the form of Manchester’s The Slow Readers Club. The capacity crowd tonight is heaving as the fast rising legends arrive to a wail of excitement and endless chants of “Readers! Readers!” From their hardcore army of fans.

They open with a rip-roaring rendition of ‘Fool For Your Philosophy’ bathed in some moody lighting which has become synonymous with their performances. ‘Lives Never Known’ and a lively ‘Lunatic’ show off their Joy Division comparisons in full.

Frontman Aaron Starkie is lovable and energetic as he bounds around the room, giving a perfect interaction between the band and the lively audience. This epic tour of the UK which is seeing them play places that are usually forgotten, alongside regular haunts, is not only an intimate affair, but gives the chance for the band to play deeper cuts from across their back catalogue.

‘Block Out The Sun’, ‘Lost Boys’, ‘Here In The Hollow’ and ‘The Wait’ show off the many depths to Starkie’s lyrics as well as allowing the band to show off their individual talents. ‘Plant The Seed’ has become a live favourite and becomes a unique monster of power, aggression and performance.

As if the performance couldn’t get any more tense and energetic, The Readers launch in to ‘Through The Shadows’ and the room explodes in to a whirling ecstatic mess. This is a band currently at the top of their game, but you know that there is so much more to be unleashed.

There is a wave around The Slow Readers Club that hasn’t been felt since the time that The Courteeners released ‘Falcon’. There’s a loving devotion that only grows with each new album, tours and festival appearances. As with both The Courteeners and Reverend and The Makers, all of these bands have survived on very little support from the mainstream media. There is definitely something in those Northern Waters that sets them aside from the rest.

‘Feet On Fire’ arrives like the old friend it is and again, the bar is raised as Starkie shows off what an enigmatic frontman he has become. Part Brett Anderson with his microphone twirling and part Ian Curtis with his stage presence. It is engaging and mesmerising all the same.

The show closes with no encore, but two absolute belters. ‘Forever In Your Debt’ and ‘I Saw A Ghost’. The band could not be more thankful for the attendance tonight and promise to see us again soon. As the band exit the stage to cheers and intense jubilation, the audience begin again to chant and endless “Readers! Readers!” These lads have made it and will only get bigger and better as they develop. Catch them next time they are around, you will most certainly want to be a part of this.